3 Stocks to Watch From the Delta-Variant Hit Airline Industry

The rapid spread of the highly contagious Delta variant of the coronavirus in many places across the globe including the United States dealt a huge blow to the Zacks Transportation - Airline industry. This is because after being battered by the pandemic-borne crisis last year, the airline operators were just finding their feet owing to improved air-travel demand (particularly for leisure). However, the rampant transmission of the highly infectious strain of COVID-19 is threatening to undo this uptick in air travel. Apart from the Delta-variant woe, steep fuel costs as a result of northbound oil prices are also limiting the airlines’ bottom-line growth. However, the focus on cargo revenues is a positive in this era of dwindling passenger revenues. Moreover, the recovery in air traffic in places like Latin America too offers a breather. This development bodes well for carriers like Azul (AZUL - Free Report) , Copa Holdings (CPA - Free Report) and Gol Linhas Aereas Inteligentes (GOL - Free Report) .

The Zacks Airline industry comprises companies engaged in the transport of passengers and cargoes to various destinations, globally. Most operators maintain a fleet consisting of multiple mainline jets in addition to several regional planes. Operations are aided by their regional airline subsidiaries and third-party regional carriers. Additionally, industry players utilize their respective cargo divisions for offering a wide range of freight and mail services. The well-being of the companies in this industrial group is linked to the health of the overall economy. For example, the spread of the Delta variant of COVID-19 in most parts of the world left a detrimental impact on the economic recovery, which was well on track before this strain came into the picture. This, in turn, hurt air-travel demand and passenger revenues, which have been moving north in the past few months.

Delta-Variant Spread Stings Airlines: The speedy transmission of the Delta variant of COVID-19 dampens the prospects of airlines, which were recovering rather well after being dented by the pandemic-related woes in 2020. Evidently, the leading U.S. carriers issued a warning that the Delta mutant is likely to hurt their September-quarter results.

Higher Oil Prices Hurting Bottom Line: The increase in fuel price per gallon with oil prices moving north (oil prices were up 24.2% in the April-June period) is not a welcoming development for the airlines as far as their bottom lines are concerned. This is because fuel expenses represent one of the largest input costs for the airlines.

With the resumption of economic activities, fuel costs are on the rise. For example, at United Airlines, average aircraft fuel price per gallon increased 66.9% year over year to $1.97 in the June quarter. Owing to the uptick in air-travel demand witnessed in the June quarter following increased vaccinations, fuel gallons consumed were up 206.4%.

Focus on Cargo Unit a Saving Grace:With passenger revenues lagging the 2019 levels and likely to fall in the September quarter due to the Delta-variant impact, the focus of airlines on their cargo units for sustaining top-line growth is a wise move. The coronavirus-induced cancellation of multiple passenger flights aided the air-cargo markets across the globe, spurring demand in the said space.

Air-Traffic Growth Propels Latin-American Carriers: Driven by factors like ramped-up vaccination, economic activities are slowly picking up the pace, buoying consumer confidence in Latin America. As evidence, people are increasingly opting for air travel nowadays as fears of contracting the coronavirus receded with widespread vaccination programs in places like Brazil. This, in turn, led to an above 100% year-over-year surge in second-quarter 2021 revenues at the carriers like Gol Linhas and Azul.

Again, in the light of the improved demand scenario, carriers in the region have been reporting healthy traffic data over the past few months. Apart from the large-scale vaccination drives in the Latin American countries like Brazil, a controlled spread of the Delta variant in the same belt may also have contributed to this traffic uptrend compared to the scenario in the United States.

The Zacks Airline industry is a 28-stock group within the broader Zacks Transportation sector. It currently carries a Zacks Industry Rank #127, which places it in the top 50% of more than 250 Zacks industries.

The group’s Zacks Industry Rank, which is basically the average of the Zacks Rank of all the member stocks, indicates satisfactory near-term prospects. Our research shows that the top 50% of the Zacks-ranked industries outperforms the bottom 50% by a factor of more than 2 to 1.

Before we discuss a few stocks from the industry, it is worth taking a look at the industry’s shareholder returns and its current valuation.

Mainly due to the Delta variant-led woes, the Zacks Airline industry has underperformed the Zacks S&P 500 composite but surpassed the sector over the past year.

The industry has increased 14.4% over this period compared with the S&P 500’s rise of 32.7%. The broader Zacks Transportation sector has increased 13.4% in the same period. 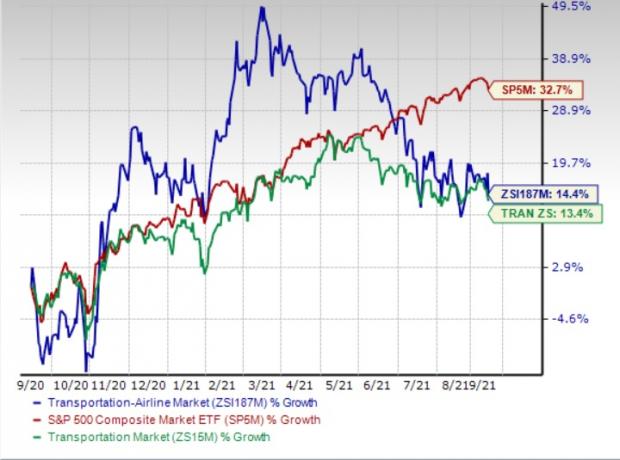 3 Airline Stocks to Keep an Eye on

Copa Holdings:: This Panama City, Panama-based carrier currently carries a Zacks Rank #2 (Buy). Courtesy of increased vaccinations, the carrier is witnessing improvements in air traffic. The metric improved in June, July and August on a month-over-month basis. We are also encouraged by the carrier's initiatives to modernize its fleet. Apart from adding planes, this carrier is replacing the outdated models as part of its fleet modernization efforts. Its liquidity position is also impressive.

Shares of the carrier have increased 5.4% in the past month. The Zacks Consensus Estimate for the third-quarter 2021 bottom line is pegged at a loss of $2.54, having narrowed from a loss of $3.80, 60 days ago. 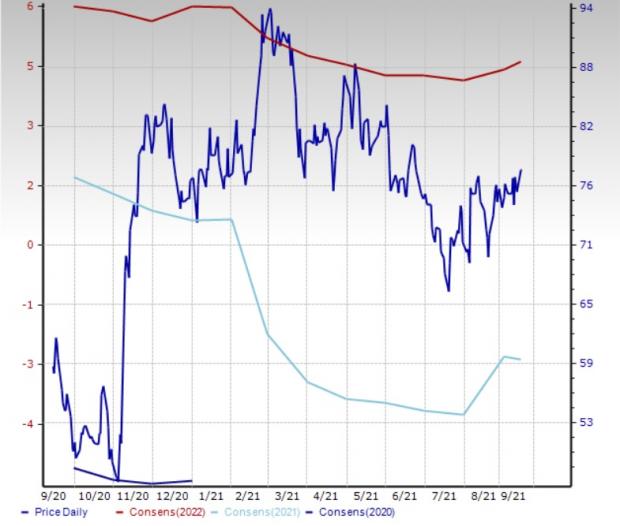 Azul: This Brazilian carrier currently carries a Zacks Rank #3 (Hold). The carrier is benefitting from improved air-travel demand in Brazil. Evidently, traffic at Azul for August skyrocketed 176.9% from the year-ago number. Moreover, strong growth in e-commerce is boosting revenues at Azul’s cargo business unit. In second-quarter 2021, other revenues surged 139.3% year over year, primarily owing to the increase in cargo net revenues, driven by upbeat demand for the airline’s logistics solutions. Revenues at Azul Cargo surged 137.2% in second-quarter 2021 from the second-quarter 2019 actuals. The same improved 27.4%, sequentially. The company expects to end 2021 with cargo revenues of approximately $1 billion, which is double the level achieved in 2019. 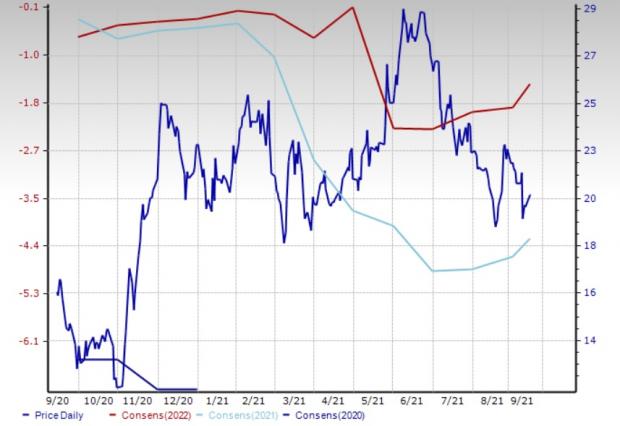 Gol Linhas Aereas Inteligentes : This Brazilian carrier currently carries a Zacks Rank of 3. Like Azul, Gol is also benefiting from improved air-travel demand in Brazil. Evidently, demand for its flights soared 85% (on the domestic front) in August 2021 from the August 2020 levels. With the rise in air-travel demand or traffic outstripping capacity growth or supply in the month, load factor (percentage of seats filled with passengers) improved to 80.2% in the month from 79.4% a year ago. The airline transported 1.5 million passengers in August (up 87% on a year-over-year basis). In fact, the carrier’s traffic has been improving over the past few months, reflecting the betterment in air-travel demand, courtesy of the spurt in immunization programs. Shares of the carrier have rallied 13.8% in the past month. 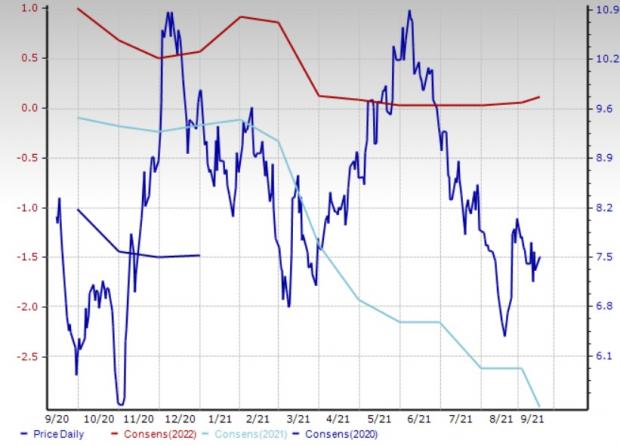