3 Domestic Auto Stocks That Might Survive the Chip Crisis

Prospects of the Zacks Domestic Auto industry appear muted at the moment as the market is reeling under semiconductor supply shortfall. Various auto biggies are battling chip deficit, which is hindering their business operations and forcing them to idle production lines. The companies are also bearing the brunt of soaring commodity costs, which are set to dent margins. Also, while electric vehicle (EV) development plans bode well for their long-term prospects, high capital spending related to the same is likely to strain cash flows. Amid the industry woes, firms like Fox Factory Holding Corporation (FOXF - Free Report) , Harley-Davidson, Inc. (HOG - Free Report) , and Nikola Corporation (NKLA - Free Report) are banking on strategic measures, including turnaround plans, strategic alliances, and focus on operational efficiency.

The Zacks Domestic Auto industry includes companies that are engaged in designing, manufacturing and retailing vehicles across the globe. These include passenger cars, crossover vehicles, sport utility vehicles, trucks, vans, motorcycles, and electric vehicles. The industry — which is highly consumer cyclic and provides employment to a large number of people — is at the forefront of innovation, courtesy of its nature and the transformation that it is going through. Widespread usage of technology and rapid digitization are resulting in fundamental restructuring of the automotive market. Several companies from the industry have engine and transmission plants, and conduct research and development and testing of electric and autonomous vehicles.

Chip Crunch a Massive Blow: The industry is struggling with an acute shortage of semiconductor supply, which is proving to be a speed-bump for automotive production and sales. Auto biggies including Tesla (TSLA - Free Report) General Motors (GM - Free Report) , Ford (F - Free Report) , and PACCAR (PCAR - Free Report) are forced to slash production and temporarily shutter factories. Tesla's Roadster has been delayed until 2023 amid chip deficit. Last month, General Motors notified that it expects production in North America to decline by 100,000 vehicles during the second half of 2021 from the first half. Trucking giant PACCAR sees deliveries in the third quarter of 2021 to be essentially flat sequentially amid the chip famine. To make matters worse, renewed strains with the resurgence of COVID-19 cases — especially in Asia — will further hit chip production. Most of the auto bigwigs believe that the chip deficit will linger well into 2022.

Electrification Stepping Up: A host of factors such as pollution issues, technical superiority, stricter fuel-emission standards, and increasing adoption by both automakers as well as customers have turned the fortunes in favor of green vehicles. With e-mobility trends becoming hotter with each passing day, auto giants are accelerating their EV game. Even the microchip shortfall and industry challenges are not holding back the automakers to invest heavily in EV technology and development. Demand for electric cars is off the charts. Ford’s Mustang Mach-E, launched in late 2020, is already the second best-selling electric SUV in the United States. EV startup Rivian Automotive’s R1T e-truck rolled off the firm’s assembly line yesterday and is set to become the first e-truck to hit the market. Next in line will be the GMC Hummer EV pickup, which is also set to commence deliveries this year.

Cost Woes a Spoiler: While massive investments in green vehicles and self-driving cars will prove beneficial in the long term, it is likely to strain its near-term financials. The firms are also battling rising commodity costs, which are set to dent margins. General Motors expects second-half 2021 commodity costs to be $1.5-$2 billion, higher than the first half of the year. Ford anticipates raw material prices to increase $2 billion in the second half of 2021 from the first-half levels. Additionally, complex functionality and surging digital features in vehicles are proliferating electronic and software glitches. Frequent recalls not only result in significant financial expenses and lower vehicle resale value but also involve reputational costs. Recently, General Motors notified that it would spend $800 million on recalls in about 69,000 cars globally.

The Zacks Automotive – Domestic industry is a 20-stock group within the broader Zacks Auto-Tires-Trucks sector. The industry currently carries a Zacks Industry Rank #173, which places it in the bottom 31% of more than 250 Zacks industries.

The group’s Zacks Industry Rank, which is basically the average of the Zacks Rank of all the member stocks, indicates tepid near-term prospects. Our research shows that the top 50% of the Zacks-ranked industries outperform the bottom 50% by a factor of more than 2 to 1.

The industry’s positioning in the bottom 50% of the Zacks-ranked industries is a result of a negative earnings outlook for the constituent companies in aggregate. Looking at the aggregate earnings estimate revisions, it appears that analysts are losing confidence in this group’s earnings growth potential. Over the past three months, the industry’s earnings estimates for 2021 have inched down 4.6%.

Despite the industry’s dim near-term prospects, we will present a few stocks worth considering for your portfolio. But before that, let's take a look at the industry’s stock market performance and current valuation.

Since automotive companies are debt laden, it makes sense to value them based on the EV/EBITDA (Enterprise Value/ Earnings before Interest Tax Depreciation and Amortization) ratio. Based on trailing 12-month enterprise value to EBITDA (EV/EBITDA), the industry is currently trading at 20.81X compared with the S&P 500’s 16.01X and the sector’s 11.59X. Over the past five years, the industry has traded as high as 45.36X, as low as 7.05X and at a median of 12.39X, as the chart below shows.

3 Stocks That May Fend off Industry Challenges

Fox Factory: Headquartered in California, Fox Factory is a manufacturer and marketer of suspension products, used primarily on mountain bikes, side-by-side vehicles, on-road vehicles, off-road vehicles, all-terrain vehicles, snowmobiles, specialty vehicles as well as applications and motorcycles. Sustained demand growth across the powersports industry and outdoor recreation is set to drive this Zacks Rank #2 (Buy) company. Fox Factory’s robust backlog, innovative product pipeline, and strong revenue and growth visibility are likely to aid its performance going forward. Its sales surged 79.2% to $328.2 million for the second quarter of fiscal 2021. Fox Factory expects fiscal 2021 sales in the band of $1200-$1250 million, indicating an increase from $890.6 million generated in fiscal 2020. The Zacks Consensus Estimate for fiscal 2021 earnings has been revised 10% upward over the past 60 days. The company has a long-term expected EPS growth rate of 19.4%. You can see the complete list of today’s Zacks #1 Rank (Strong Buy) stocks here. 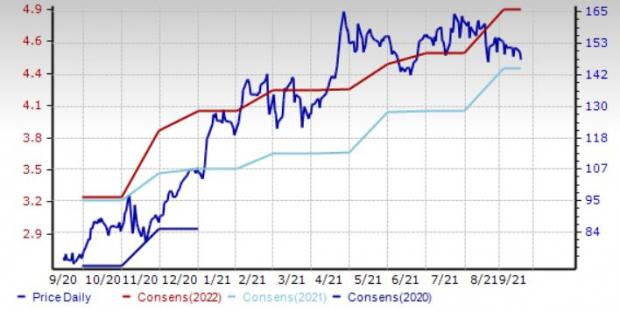 Harley-Davidson: Milwaukee, WI-based Harley Davidson is one the leading motorcycle makers. The company, under new CEO Jochen Zeitz, has been making aggressive efforts to revamp its product lineup that will better align with market trends. The firm's turnaround plan — dubbed as "Rewire" — and five-year strategic plan "Hardwire" boost optimism. Per the plan, the motorcycle giant company remains focused on bolstering its market position by putting more emphasis on sportier bikes and the modern marketing strategy. Harley-Davidson envisions the motorcycles segment’s revenues to grow in the band of 30-35% on a yearly basis in 2021. The Zacks Consensus Estimate for earnings for the current year has been revised 18% upward over the past 60 days. The company currently carries a Zacks Rank #2 and has a long-term expected EPS growth rate of 24.4%. 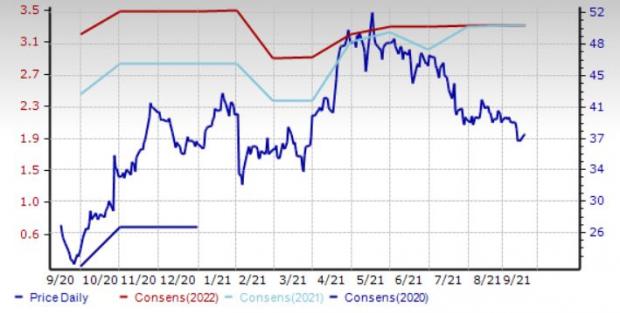 Nikola: Indeed, this Arizona-based electric truck startup has been somewhat tarnished owing to fraudulent charges by short-selling firm Hindenburg Research. The stock has depreciated 35% year to date. But the fact that it is currently trading near its 52-week low levels and that the company is making conscious efforts to bounce back might just imply that it is the right time to pick the stock. Nikola is optimistic about commencing deliveries of the Nikola Tre, a fully electric truck, by year-end. The company recently teamed up with industrial powerhouse Bosch for fuel-cell manufacturing, and is set to deploy Bosch fuel cells in both Tre and Nikola Two trucks. It has boosted sales and service dealer network in the Northeastern United States with the addition of Alta Equipment Group. Collaborations with IVECO, OGE, TravelCenters of America and Total Transportation Services are likely to boost Nikola’s prospects. It currently carries a Zacks Rank #2 and has a long-term expected EPS growth rate of 30%.