Stocks that boast a Zacks Rank #1 (Strong Buy) title have a long and demonstrable history of outperforming the market over a one to three-month time period. And, this unique ranking is only bestowed upon the top 5% of all stocks within the Zacks Rank universe.

Not only does this stock-picking system help identify the most elite stocks, but it also enables investors to hold a particular company while shares continue to gain in value beyond that three-month investment horizon.

Below, we highlight a stock that is currently a standout in the broad medical space, and by following our ranking system, investors could have realized major gains.

The first time WCG was added to the #1 (Strong Buy) list was back in November after the medical services company reported great fiscal 2017 third quarter results. Adjusted EPS of $4.08 flew past the Zacks Consensus Estimate of $1.90, and revenues of $4.4 billion also beat our consensus estimate. Medicaid Health Plans GAAP and adjusted premium revenue increased 11.4% and 14.7%, respectively, while Medicare Prescription Drug Plans (PDP) premium revenue jumped 14.8% during Q3. As a result, WellCare raised its full-year 2017 adjusted EPS guidance. WCG closed at $206.50 that trading day.

WCG was included on the #1 list a second time on May 11 after strong Q1 2017 results. EPS easily beat the Zacks Consensus again, while revenues of $4.6 billion increased 17.2% year-over-year. All lines of WellCare’s business produced impressive earnings results during the first quarter, and the company increased its full-year EPS outlook in response. Seven months after first becoming a #1 pick, shares were only up around 5% to $217.45.

The third time WCG was added to the Strong Buy list was on July 27 after its Q2 earnings report was released. EPS guidance for the year was revised upwards once again, and both its top and bottom line surpassed the Zacks Consensus Estimate. WellCare’s CEO noted that it also saw continued strong performance across all three of its business divisions. But nine months after first becoming a #1 pick, shares finally saw some momentum, and were up almost 24% to $255.73.

After falling down to a #2 (Buy) for a few weeks, WCG was added to the #1 (Strong Buy) list once again at the end of August, mostly likely due to rising earnings estimates for the company’s upcoming quarter. 10 months after first becoming a #1 pick, shares increased 46.5% to $302.57.

WCG is currently holding on to its Strong Buy rank, and the stock has jumped nearly 80% in the past one-year period.

Here, this table shows the price performance of WCG (in red), as well as the 12-month forward looking EPS estimate (in green) from the time the stock first earned a Zacks Rank #1 (Strong Buy). During this stretch, WCG never moved lower than a Zacks Rank #3 (Hold). 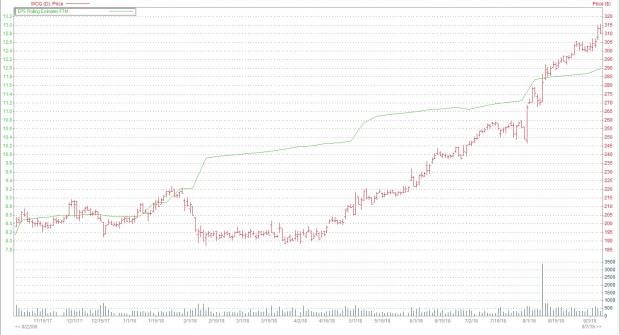