Churchill Downs Incorporated (CHDN - Free Report) stock has destroyed the broader market and its gaming industry peers over the last five years. The historic horse racing icon is poised to post strong growth as the in-person economy returns and the broader sports gambling world grows in popularity after the key 2018 Supreme Court ruling.

The firm’s TwinSpires segment is one of the largest and most profitable online horse race wagering, online sportsbook, and iGaming platforms in the U.S. On top of that, Churchill Downs has a significant presence in the brick-and-mortar casino world across eight states. This includes roughly 11,000 slot machines and video lottery terminals, alongside 200 table games.

Churchill Downs and the entire sports-focused betting industry have benefited from the U.S. Supreme Court’s 2018 decision that cleared the way for states to legalize sports gambling outside of Nevada. Sports betting is now legal in more than two dozen states, though many are still limited to in-person betting—around a dozen states currently have legalized online sports gambling. 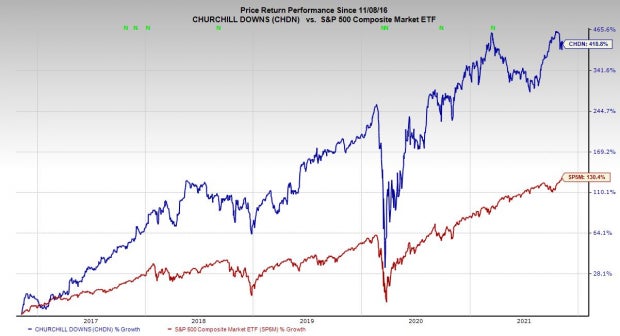 CHDN revenue did fall 21% last year amid a covid-hurt stretch that forced the firm to run races without fans, including the 146th Kentucky Derby. The fall came after it posted 32% sales growth in 2019 and 14% in 2018. Luckily, the company has flexed its muscles amid the economic reopening.

The firm’s Q2 revenue skyrocketed 178% against an easy-to-compare period last year. Most recently, Churchill Downs topped our third quarter revenue and adjusted earnings estimates on October 27. CHDN has beaten our EPS estimates by an average of 28% in the trailing three quarters and analysts have upped their bottom-line outlooks since its report.

At the bottom end of the income statement, Churchill Downs earnings are expected to skyrocket 675% to $6.42 a share, before jumping an additional 38% in 2022.

Wall Street was also pleased to hear that the firm’s board authorized a new $500 million stock repurchase plan. And it announced its $0.667 per share annual dividend will payable on January 7, 2022 to shareholders of record on December 3.

CHDN stock has cooled off over the past year, though it’s still up 32% to roughly match the S&P 500. This run includes a huge downturn that began in early March as Wall Street dumped big pandemic winners. Its subsequent resurgence saw it post new records in mid-October.

Churchill Downs stock reached overbought RSI levels (70 or higher) around then and its recent downturn has pushed it below neutral at 47—even as the SPDR S&P 500 ETF Trust (SPY - Free Report) climbs further into overbought territory.

In terms of valuation, the stock is trading below its year-long median and at a 40% discount to its highs over this stretch at 28.4X forward 12-month earnings. This also represents a massive discount against its industry’s whopping 139X average.

Churchill Downs currently lands a Zacks Rank #1 (Strong Buy) based on its solid upward earnings revision activity that’s particularly strong for FY22. The company also grabs a “B” grade for Growth in our Style Scores system. Plus, all five of the brokerage recommendations Zacks has for CHDN are “Strong Buys.”

The stock closed regular hours Monday roughly 9% below its records at $238.10 a share. And its current Zacks consensus price target of $276.17 per share represents 16% upside to its current levels. With all of this in mind, investors might want to consider Churchill Downs as a play on the quickly expanding sports gaming market.