American Woodmark Corp. (AMWD - Free Report) is having trouble fighting inflationary pressures even though its pushing through price increases. Analysts have cut this Zacks Rank #5 (Strong Sell) earnings estimates for this year and next.

American Woodmark is one of the largest cabinet manufacturers in America with over a dozen brands. It sells in major home centers and partners with builders and independent dealers and distributors.

Inflation Continued to Hit in Q2

Despite pushing price increases through in the fiscal first quarter, inflationary pressures continued to hit American Woodmark in the fiscal second quarter.

On Nov 23, American Woodmark reported its second quarter results and missed on the Zacks Consensus for the fifth quarter in a row.

Net income in the second quarter of 2022 fell $21.1 million due to continued expansion of inflationary pressures outpacing the company's price actions taken across all their channels.

Prior price increases have begun to partially offset the inflationary impacts but there is an inherent lag between price actions and seeing some relief. It can take up to 6 months, or more.

Net sales for the quarter were only up 1% to $453.2 million compared to the same quarter a year ago. It did see labor and supply chain challenges in the quarter, especially with particle board.

In good news, it experienced growth in the new construction sales channel versus a year ago as market demand remained strong.

With the labor and supply chain challenges expected to remain, as well as the inflationary pressures, it's not surprising that analysts have been cutting earnings estimates for this year and next.

Shares Fell Over the Last Year

Even though the housing market remains strong, as does cabinet demand, shares of American Woodmark have sunk nearly 32% over the last year. 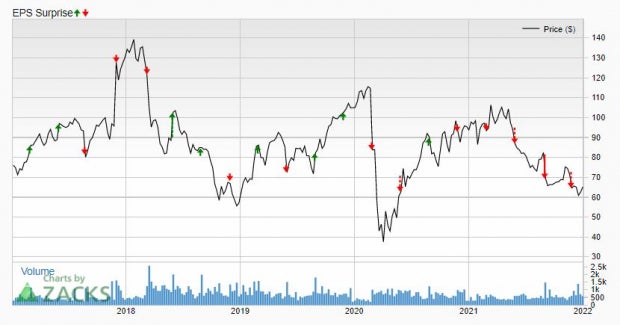 Inflation, labor and supply chain challenges continue to be a worry.

Investors might want to wait until that issue shows some clarity before diving in on American Woodmark.