SMART Global Holdings (SGH - Free Report) is the under-the-radar semiconductor stock you've been looking for, with its broadening portfolio of cutting-edge chips that are poised to take flight in this commencing technological Renaissance.

SGH is roaring out of the shadows with an ambitious growth strategy that won't remain under the investors' radars for much longer. New CEO Mark Adams is transforming this once complacent memory-focused legacy tech business into a motivated leader in niche innovations.

The company released a record quarterly report at the start of 2022, blowing analysts' estimates out of the water and raising forward guidance. However, SGH's undiscovered attributes appear to have both positive and negative consequences, which we saw in its (unwarranted) post-earnings capitulation. This drop-off is a technical retreat catalyzed by the overbought RSI levels it had reached in recent weeks after an over 100% 52-week run into this year opening earnings report (confusion about the upcoming stock split may also be playing a role).

The good news is that it presents us with an excellent trading opportunity as the stock picks up support at its 50-day moving average (which you can see below). 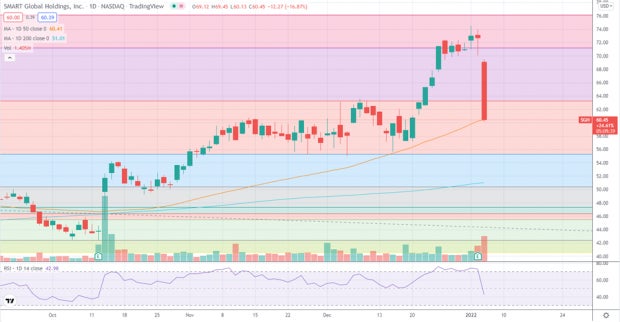 SMART Global shares' exceedingly thin trading volumes (low liquidity due to its under-the-radar quality) allowed a small group of controlling institutional shareholders to direct its post-earnings narrative. They pulled profits from this recent winner (up 70% since mid-October), and the downward momentum catalyzed a fear-fueled domino sell-off.

Don't let these big-shot Wall Street firms scare you away from this clear-cut winner. SGH's post-earnings capitulation is extraordinarily overdone and with the recent shareholder shuffle.

Silver Lake, a nearly $100 billion tech-focus private equity fund, had been the primary shareholders of SGH since it went public in 2017 until this past fall when the global investment group completely exited the trade (with public returns of nearly 400% in just a few years), leaving $10s of millions in stock value up for grabs.

SMART Global's ownership has since been erratic, with most of the investing world still unaware of this small-cap stock's existence. SGH's ownership is almost entirely institutional at this point, and with the already thin volumes, its vulnerability to short-term price manipulation is high.

Nevertheless, those analysts covering SGH are more bullish than ever after its most recent quarterly release. SGH is lining up perfectly for an ideal options trade as it capitulates out of overbought RSI territory, and these fear-induced publicly-traded contracts maintain a muted implied volatility (meaning relatively cheap calls).

$75 is my short-term target price for SGH as today's elevated volumes, coupled with an early February stock split, bring a new slate of investors to the table. I'm projecting 200% to 300% returns on this trade but will begin pulling profits on my options once SGH breaks above $68 (Fibonacci retracement derived price target).

SGH was down as much as 18% in its post-earnings price action, but I remain unconvinced that it will stay below $70 a share for long. This knee-jerk sell-off reaction resulted from its small market cap (less than $1.5 billion), concentrated ownership, and overbought RSI levels, which SGH had floated up into following its sizable 25% end-of-year rally.

SGH also announced that it would be initiating a 2-for-1 stock split, which would go into effect at the beginning of February. This is a clear signal from SMART Global's new CEO, Mark Adams, whose savvy ambition for innovative growth is the primary reason we are in SGH, that this stock is headed much higher. Either way, I'm more bullish on SGH post-earnings than ever before.

Now is the time to add this hidden gem to your portfolio before the broader investing world catches wind of this discounted chip winner.

SMART Global has been around since the late 80s, but it wasn't until Mark Adams took the helm amid the pandemic last year that this chipmaker's upside potential went through the roof. Adams is transforming this once complacent memory-focused legacy tech company into an energized visionary.

Adams was the leading force behind SGH's quick strategic acquisition of Cree's niche LED chip business at the peak of pandemic fear for a steal at $300 million. Cree LED's synergies are already paying dividends as it drives margin expansion, improves the firm's capital & operational efficiency, and provides critical industry relationships.

Smart Global's new forward-thinking chief has already vastly improved its operational performance and is ramping up R&D spending to ensure that the enterprise remains ahead of the innovative curve.

Analysts are getting increasingly bullish on this under-the-radar transformation play as SGH flips the switch on accelerating profitable growth, knocking estimates out of the park by an expanding percentage over the past 3 quarters. Zacks Consensus EPS Estimates for SGH's have been soaring across all time horizons after this most recent quarterly report driving the stock into a Zacks Rank #2 (Buy), and all 6 covering analysts agree on a buy rating for the unique value opportunity here.

SMART Global Holdings had been a reliable pure-play memory leader in the chip space for over 30 years before deciding to broaden its product portfolio, which appeared to be catalyzed by activist investors following SGH's 2017 IPO. The company has since executed 4 strategic acquisitions.

Penguin Computing was SGH's first vital acquisition ($85 million price tag) back in 2018, adding a broad portfolio of leading next-generation products, including high-performance computing (HPC), cloud computing, hyperscale data centers, and the development of artificial intelligence (AI). This segment has exploded since its acquisition as its AI-focused products experience budding demand.

In the summer of 2019, this resourceful chip giant acquired Artesyn Embedded Computing and Inforce Computing for $80 million and $12 million, respectively. Artesyn (which is now called Smart Embedded Computing) provides critical data center architecture used in "industries such as telecom, military and aerospace, medical, and diverse automation and industrial markets," according to its website.

SMART's diverse set of growing end-market demands provides the company with an enormous total addressable market (TAM), significant upside potential, and not to mention an excellent hedge against the cyclical nature of the semiconductor market. 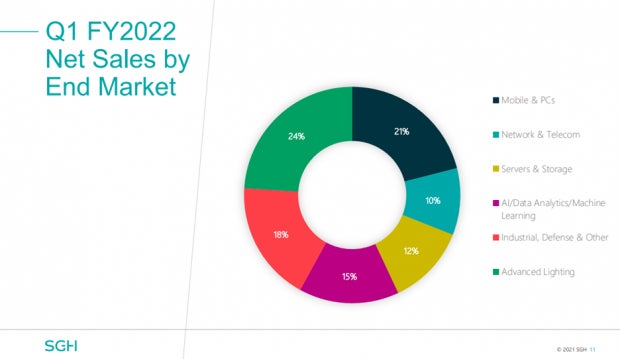 The 11x forward P/E that SGH is currently trading at is a remarkably underappreciated valuation multiple for a high-growth tech business that is expected to exhibit consistent 20%+ earnings growth in the years to come.

With its fresh innovation-oriented operational outlay, Mark Adams at the helm (with a now proven track record of skilled management), and an industry-wide outlook of accelerating growth, the future SGH has never been brighter. I would recommend that you purchase some shares for a long-term hold along with these monthly March calls in SMART Global before its takes flight.