Q4 Earnings Preview: What to Expect from JPMorgan and the Big Banks

Bank stocks have perked up lately, as the outlook for interest rates has become more favorable to the group’s business. The market sees the coming Fed tightening cycle and the resulting projected steepening of the yield curve as a benefit to bank margins.

You can see this upgraded sentiment shift in the chart below that plots JPMorgan (JPM - Free Report) , which kicks-off the 2021 Q4 reporting cycle for the group on Friday, January 14th, the Zacks Major Banks Industry (Blue line) and the S&P 500 index (Red line) over the preceding year.

We have also added the Zacks Technology sector to the chart—the green line—to show the market’s souring on growth opportunities in the new monetary policy backdrop. 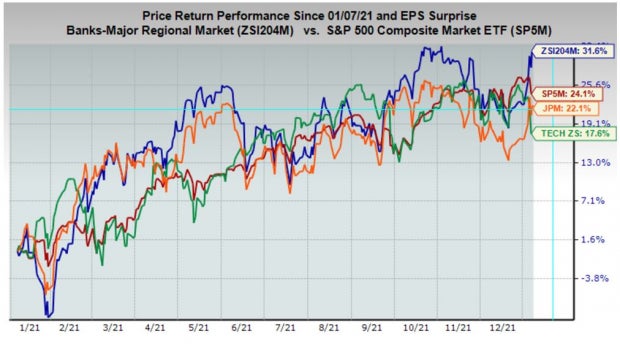 JPMorgan shares were down following each of the preceding 5 quarterly releases despite handily beating estimates. This makes us think that the setup is likely not very favorable for how JPM shares might be expected to behave in response to the release, particularly with the stock up more than +3% over the past month even as the S&P 500 index has modestly lost ground (down -0.5%).

With respect to capital markets in the Q4 quarterly releases, we should expect continued strong numbers from JPMorgan, Citi and the other money center operators and brokers. While the group’s Q4 capital markets totals will most likely be below the strong showing in the September quarter, they will nevertheless be significantly above pre-pandemic levels. Trends in the pipeline about investment banking deal flow suggest that the strong momentum should continue in 2022, though likely below the record 2021 level.

It will be interesting to see management’s commentary about trends in the core banking business, particularly about loan demand. The group’s Q4 results are expected to show some modest improvement in loan growth, but it has so far been a lot weaker than would be consistent with the degree of rebound in household and business spending. Management’s outlook for the yield curve will also be informative.

For the Zacks Major Banks industry, which includes these major banks and account for roughly 45% of the Finance sector’s earnings, Q4 earnings are expected to decline -5.6% on +4.4% higher revenues. This would follow +41.6% earnings growth on +3.9% higher revenues.

The chart below takes a big-picture view of S&P 500 quarterly expectations, with earnings and revenue growth expectations for the next three quarters contrasted with actuals for the preceding four periods; expectations for 2021 Q4 have been highlighted. 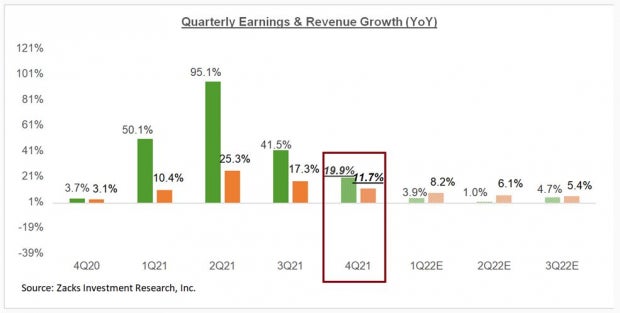 As you can see in the above chart, the growth pace is expected to decelerate meaningfully over the coming quarters, but still remain positive.

The chart below provides a big-picture view on an annual basis. 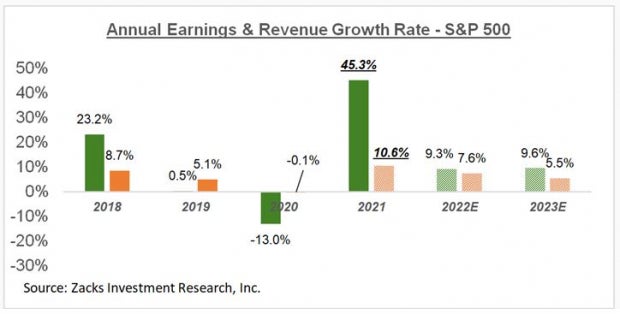 The Q4 reporting cycle will (unofficially) get underway this week. But from our perspective, the Q4 earnings season has gotten underway already, with results from 20 S&P 500 out at this stage. These 20 index members - including bellwether operators like FedEx, Nike, Oracle and others - reported results for their fiscal quarters ending in November, which we count as part of the official December-quarter tally.

We have roughly 30 companies on deck to report results this week, including 8 S&P 500 members. This week’s reporters include the aforementioned big banks and a few other major players like Delta Airlines and chip-maker Taiwan Semiconductor.

For the 20 index members that have reported already, total Q4 earnings or aggregate net income is up +29.3% from the same period last year on +12.8% higher revenues, with 85% of the companies beating EPS estimates and 90% beating revenue estimates.

This is too small a sample to draw any firm conclusions from. That said, the comparison charts below put the earnings and revenue growth rates for these 20 companies in a historical context.

The comparison charts below put the Q4 EPS and revenue beats percentages in a historical context.

The summary table below shows Q4 expectations in the context of what we saw in the preceding period. 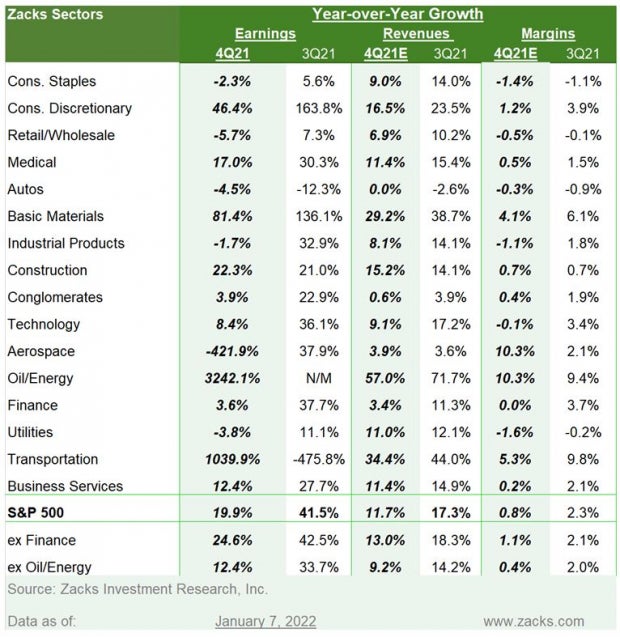 For an in-depth look at the overall earnings picture and expectations for the coming quarters, please check out our weekly Earnings Trends report >>>> Handicapping the Q4 Earnings Season