The Zacks Rank methodology is a unique way to discover some of the best companies to invest in, and is a useful tool for beginner and more experienced investors alike; it identifies companies both big and small that have the right characteristics to produce superior gains.

When a company earns that coveted Zacks Rank #1 (Strong Buy) label, its means they have a high probability of outperforming the market over the next one to three months. But, achieving this high rank is not an easy thing to do, as only 5% of companies within the Zacks Rank universe earn this position.

Below, we highlight a top performing stock in the business services industry, and by following our ranking system, investors could have realized nice gains.

The first time FCN was added to the #1 (Strong Buy) list was after it reported solid fiscal 2017 fourth quarter results at the end of February. Both earnings and revenues beat the Zacks Consensus Estimate; revenues of $467.7 million were actually a record, driven higher thanks to demand within its Corporate Finance & Restructuring and Forensic and Litigation Consulting segments. Adjusted EBITDA hit $55.5 million, or 11.9% of revenues, compared to $30.3 million, or 6.9% of revenues, in the prior year quarter. Shares closed at $48.26 that trading day.

The next time FCN was added to the #1 list was on May 4 after the company reported impressive fiscal 2018 first quarter results. Earnings of $1.04 handily beat the Zacks Consensus of 65 cents per share, while revenues of $498 million also beat our estimate and grew 11.5% year-over-year. Net income of $38.9 million compared to $14 million in the year ago quarter, largely due to higher revenues and a lower effective tax rate. Four months after first becoming a #1 pick, FCN stock was up over 19% to $57.51 per share.

FCN was added to the Strong Buy list a third time on August 3 after posting more strong results in its fiscal 2018 second quarter. The top and bottom line beat the Zacks Consensus Estimate, and revenues jumped 15.2% year-over-year. Net cash provided by operating activities grew to $34.6 million, while total debt of $375 million was down considerably from $485 million total debt load recorded in the prior year quarter. Eight months after first becoming a #1 stock, shares gained more than 64% to $79.23.

The consulting services company dropped back down to a #3 (Hold), and the stock has moved higher by 93% in the past one-year period.

This table shows the price performance of FCN, as well as the 12-month forward looking EPS estimate, from the time the stock first earned a Zacks Rank #1 (Strong Buy). During this stretch, FCN never moved lower than a Zacks Rank #3 (Hold). 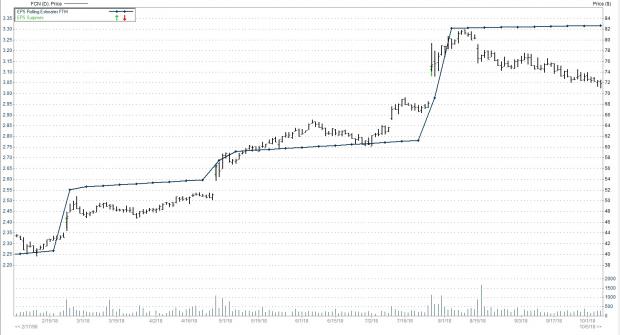