3 Stocks to Watch in the Omicron-Variant Hit Airline Industry

The spread of the highly transmissible COVID-19 variant (B.1.1529 strain) across many countries worldwide including the United States is the latest setback for the Zacks Transportation - Airline industry. First identified in South Africa, the Omicron strain has so far caused multiple flight cancellations, particularly in the United States, hampering holiday travel plans. The bearish revenue guidance for first-quarter 2022 by several airline heavyweights further bears testimony to the omicron-induced crisis for the industry.

The increase in oil price is another negative for the industry players as far as their bottom-line growth is concerned. However, the recovery in air traffic in places like Latin America is a positive.  This development bodes well for carriers like Azul (AZUL - Free Report) , Copa Holdings (CPA - Free Report) and Gol Linhas Aereas Inteligentes (GOL - Free Report) .

The Zacks Airline industry comprises companies engaged transporting passengers and cargoes to various destinations, globally. Most operators maintain a fleet consisting of multiple mainline jets in addition to several regional planes. Operations are aided by their regional airline subsidiaries and third-party regional carriers. Additionally, industry players utilize their respective cargo divisions for offering a wide range of freight and mail services. The well-being of the companies in this industrial group is linked to the health of the overall economy. For example, the spread of the omicron variant of COVID-19 in most parts of the world induced multiple flight cancellations as crew members fell ill due to the highly contagious strain. This development disrupted holiday travel plans of many in the United States, in turn denting passenger revenues of airline companies.

Omicron-Variant Spread Stings Airlines: Agreed that the aviation space had a much better run in 2021 than the coronavirus-ravaged scenario in 2020. However, the airlines seem on the backfoot again with a slew of flight cancellations over the past few weeks. Omicron-induced staff crunch and weather woes prompted the U.S. carriers to call off multiple flights, upsetting travel plans of many passengers. Some carriers even trimmed their schedule for the current month.

Even though the fourth-quarter 2021 earnings season is in its nascent stage, airline players that already released their numbers, provided disappointing outlooks for the March quarter, particularly on the revenue front, due to the omicron-led crisis.

5G Rollout Fears an Added Woe: Per a Reuters report, CEOs of major U.S. airlines warned of catastrophic aviation crisis in the event of 5G 'C-Band' service being rolled out by the telecom companies. Some carriers cautioned that many flights could be affected if 5G signals cause limited interference with altitude instruments under certain weather conditions. Aviation companies are mainly concerned about the 5G rollout causing wrong readings by altimeters (devices that use radio frequencies to measure the distance between aircraft and the ground, and help planes land in bad weather). Even though airlines heaved a sigh of relief with 5G deployment at major airports being delayed temporarily, the overhang will remain unless a permanent solution to the problem is found.

Oil Price May Increase in 2022 Hurting Bottom Line: The U.S. Energy Information Administration (EIA) in January 2022, increased its oil price forecast. The EIA in its current-month's short-term energy outlook stated that it expects the average Brent spot price to be $74.95 per barrel for the full year. This marks an increase from its December forecast wherein it had expected the average Brent spot price at $70.05 per barrel for 2022. It projects the same to average $78.63 per barrel during the first quarter of 2022. This estimate is $5.63 per barrel higher than its previous prediction.

EIA’s hiked forecast for oil prices is an unfavorable development for the airlines and might dent bottom-line growth. This is because fuel expenses represent one of the highest input costs for these players.

The Zacks Airline industry is a 28-stock group within the broader Zacks Transportation sector. It currently carries a Zacks Industry Rank #247, which places it in the bottom 3% of more than 250 Zacks industries.

Before we discuss a few stocks from the industry, it is worth taking a look at the industry’s shareholder returns and its current valuation.

Mainly due to the omicron-triggered woes, the Zacks Airline industry has underperformed the Zacks S&P 500 composite as well as the sector over the past year.

The industry has decreased 12.3% over this period against the S&P 500’s rise of 14.4%. The broader Zacks Transportation sector has increased 3.7% in the same period. 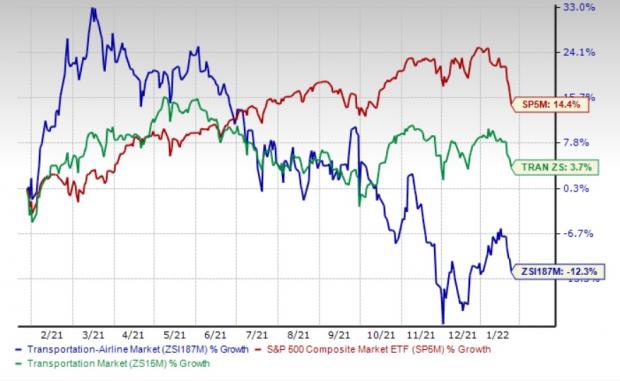 3 Airline Stocks to Keep an Eye on

Moreover, strong growth in e-commerce is boosting revenues at Azul’s cargo business unit. In third-quarter 2021, cargo and other revenues rose 11.5%, sequentially, and more than 100% from the 2019 level, primarily driven by upbeat demand for Azul’s logistics solutions. Cargo revenues are likely to have been strong in the fourth quarter as well.

Shares of the carrier have rallied 10% in the past month. The Zacks Consensus Estimate for the fourth-quarter 2021 bottom line stands at a loss of 57 cents, having narrowed from a loss of 90 cents, 90 days ago. 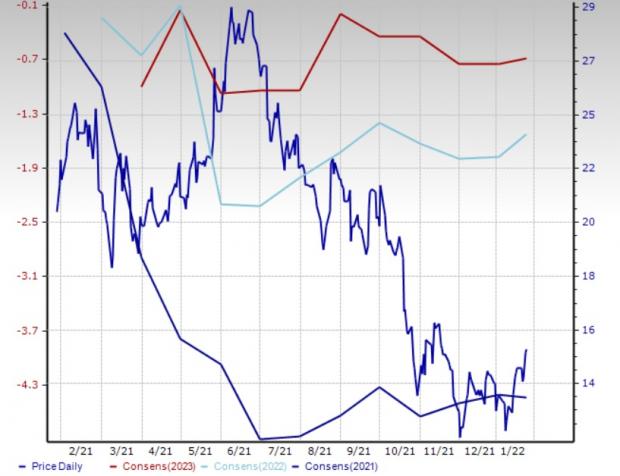 Gol Linhas Aereas Inteligentes: This Brazilian carrier currently carries a Zacks Rank of 3. Like Azul, Gol also benefits from improved air-travel demand in the country.  The airline expects demand to increase 15.4% in the fourth quarter of 2021 from the year-ago level, while capacity is predicted to expand 13.2%.

Gol Linhas anticipates 2022 total net revenues to exceed the pre-pandemic (2019) levels. The Zacks Consensus Estimate for the fourth-quarter 2021 bottom line has narrowed to 51 cents from 53 cents, 60 days ago. 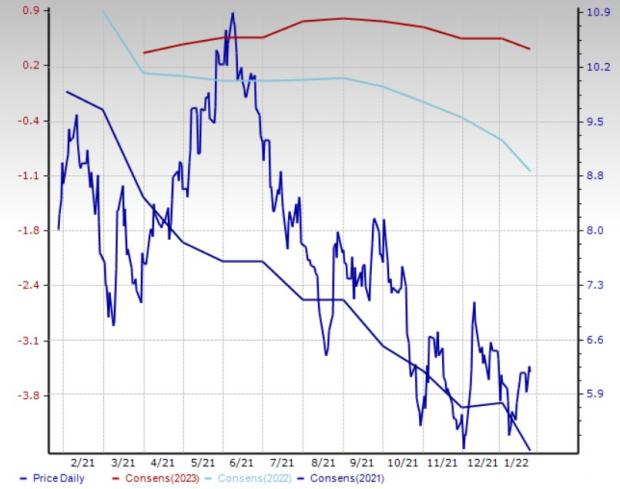 Copa Holdings: This Panama City, Panama-based carrier currently carries a Zacks Rank #3 (Hold). Courtesy of increased vaccinations, the carrier is witnessing improvements in air traffic. We are also encouraged by the airline's initiatives to modernize its fleet. Apart from adding planes, this carrier is replacing the outdated models as part of its fleet modernization efforts. Its liquidity position is also impressive.

Shares of the carrier have gained 11.3% in the past six months. The Zacks Consensus Estimate for the fourth-quarter 2021 bottom line has been raised to $1.05 from 37 cents, 90 days ago. 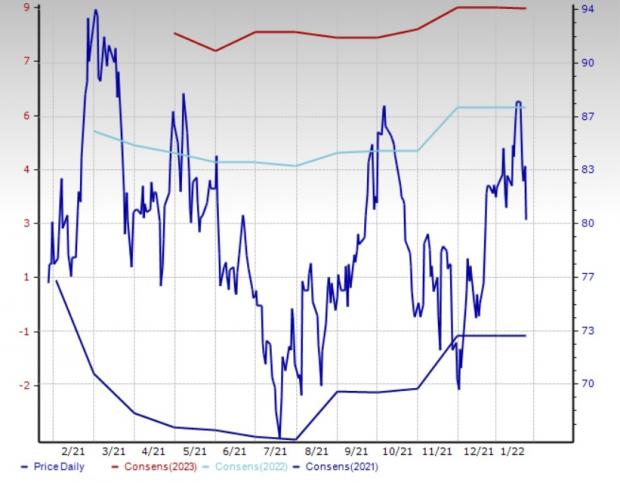