The Zacks Oil and Gas - Canadian E&P industry consists of companies primarily based in Canada, focused on the exploration and production (E&P) of oil and natural gas. These firms find hydrocarbon reservoirs, drill oil and gas wells, and produce and sell these materials to be refined later into products such as gasoline, fuel oil, distillate, etc. The economics of oil and gas supply and demand is the fundamental driver of this industry. A producer’s cash flow is primarily determined by the realized commodity prices. In fact, all E&P companies' results are vulnerable to historically volatile prices in the energy markets. A change in realizations affects their returns significantly and causes them to alter their production growth rates. The E&P operators are also exposed to exploration risks where drilling results are comparatively uncertain.

Commodity Prices Benefitting from Macro Tailwinds: Earlier this month, the price of WCS crude — the Canadian benchmark — rose above $100 a barrel to reach its highest since 2008 on account of Russia’s launch of military operations in Ukraine. As it is, crude prices were already gaining strength prior to the attack because of a demand uptick following the reopening of economies, a rebound in activity and the resumption of international air travel. What’s more, the commodity could spike further if the United States decides to tap Canada to replace its imports from Moscow that has been banned by the Biden administration. With natural gas realizations remaining healthy too amid the macro tailwinds, the E&P companies will greatly benefit for obvious reasons. Importantly, commodity prices appear to have entered a protracted period of stability at levels where the operators can generate free cash flow through their drilling activities.

Continued Focus on Cost Control: Canadian energy companies have changed their approach to spending capital. Over the past few years, producers worked tirelessly to cut costs to a bare minimum and look for innovative ways to churn out more oil and gas. And they managed to do just that by improving drilling techniques and extracting favorable terms from the beleaguered service providers. Moreover, driven by operational efficiencies, most E&P operators have been able to reduce unit costs, while the coronavirus-triggered destruction in crude forced them to adopt a more disciplined approach to spending capital. These actions are expected to preserve cash flow, support balance sheet strength and help the companies emerge stronger. In particular, cash from operations is on a sustainable path as revenues improve and companies slash capital expenditures from the pre-pandemic levels amid sharply higher commodity prices.

Lack of Pipeline Availability: Energy consultant IHS Markit sees oil production in Canada surging by some 900,000 barrels per day during the 2020-2030 period. Despite this impressive output growth, the country's exploration and production sector has remained out of favor, primarily due to the scarcity of pipelines. In short, pipeline construction in Canada has failed to keep pace with rising domestic crude volumes — the heavier sour variety churned out of the oil sands — resulting in an infrastructural bottleneck. This has forced producers to give away their products in the United States — Canada’s major market — at a discounted rate. As it is, Canadian heavy crude is inferior to the higher-quality oil extracted from shale formations in the United States and is more expensive to transport and refine. Following U.S. President Joe Biden’s revocation of TC Energy’s contentious Keystone XL pipeline and the company’s subsequent termination of the project, Canadian oil sands producers will have to wait a little longer for the takeaway capacity issue to be resolved.

The Zacks Oil and Gas - Canadian E&P is a six-stock group within the broader Zacks Oil - Energy sector. The industry currently carries a Zacks Industry Rank #28, which places it in the top 11% of around 250 Zacks industries.

The industry’s position in the top 50% of the Zacks-ranked industries is a result of a positive earnings outlook for the constituent companies in aggregate. Looking at the aggregate earnings estimate revisions, it appears that analysts are highly optimistic about this group’s earnings growth potential. While the industry’s earnings estimates for 2022 have surged 162.8% in the past one year, the same for 2023 have soared 109.9% over the same timeframe.

Considering the encouraging near-term prospects of the industry, we will present a few stocks that you may want to consider for your portfolio. But it’s worth taking a look at the industry’s shareholder returns and current valuation first.

The Zacks Oil and Gas - Canadian E&P has fared better than the broader Zacks Oil - Energy Sector as well as the Zacks S&P 500 composite over the past year.

Stocks to Watch For

Enerplus: An upstream operator, Enerplus focuses on Bakken and Three Forks formations in the Williston Basin in North Dakota, together with interests in the Marcellus Basin and waterflood projects in Canada. Banking on its low financial leverage and robust liquidity, ERF is in a pole position to take advantage of the sharply higher commodity prices.

Over 60 days, Enerplus has seen the Zacks Consensus Estimate for 2022 increase 37.1%. Sporting a market capitalization of around $3.1 billion, the Zacks Rank #1 (Strong Buy) ERF’s shares have gained some 127.2% in a year. You can see the complete list of today’s Zacks #1 Rank stocks here. 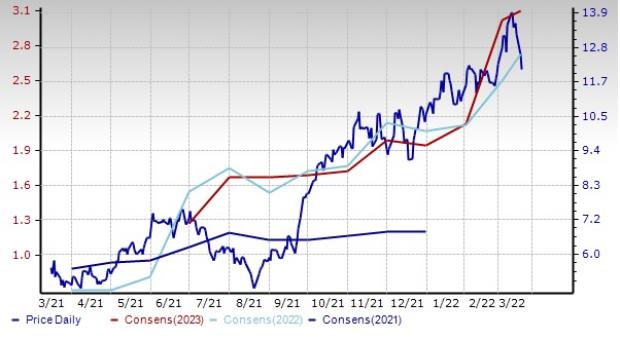 Notably, CNQ beat the Zacks Consensus Estimate for earnings in each of the last four quarters. The company has a trailing four-quarter earnings surprise of roughly 18.7%, on average. Canadian Natural, with a Zacks Rank #2 (Buy), has seen its shares gain   around 90% in a year. 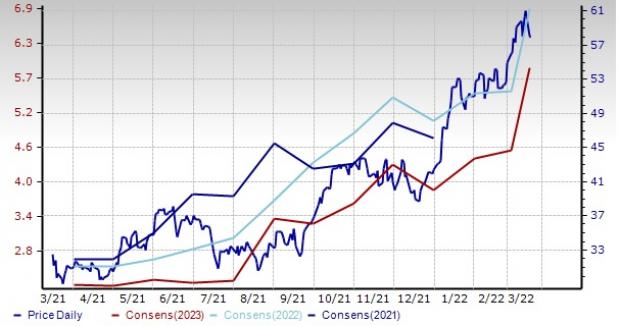 Over 60 days, Crescent Point has seen the Zacks Consensus Estimate for 2022 increase 13.4%. Valued at around $3.8 billion, CPG has a projected earnings growth rate of 100% for this year. Crescent Point’s shares have gained some 54.2% in a year. 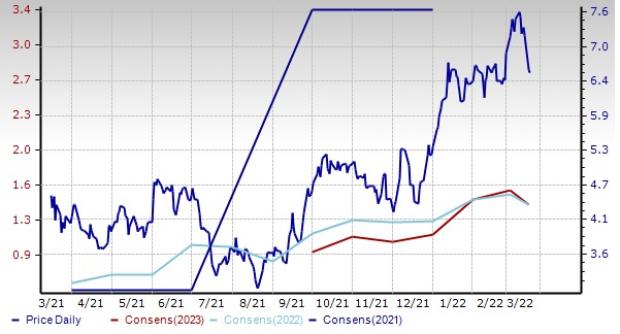 Baytex Energy: An energy producer based in Western Canada, Baytex focuses on a high-quality and diversified oil portfolio across multiple plays, spanning Peace River, Duvernay, Lloydminster and Viking. The company is also active in the Eagle Ford shale. Banking on its strong execution and disciplined capital allocation, BTEGF is on track to generate substantial free cash flow in this commodity upcycle. Baytex is also relentlessly working to improve its leverage ratios and enhance shareholder returns. 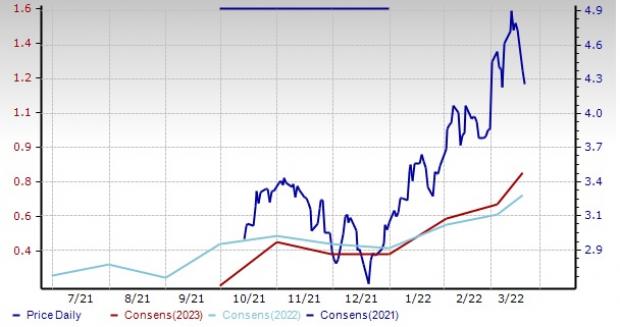