3 Trends Shaping the Future of the Aerospace-Defense Industry

Improved Air Traffic Outlook Boosts Prospects: Recovering global air traffic data in recent times has boosted the near-term growth prospects of the industry. As stated in a report published by the International Air Transport Association (IATA), this March, global air passengers accounted for 47% of 2019 level in 2021. This number is projected to improve to 83% in 2022. Such impressive projections bode well for commercial aerospace giants, which have long borne the brunt of poor air travel in the form of delayed jet deliveries and, in some cases, cancellation of their orders altogether by airlines. Notably, in 2022, airlines are scheduled to receive 1622 aircraft, which is above the 2019 tally. This should boost the top-line performance of commercial jet manufacturers and associated companies, thereby bolstering their near-term growth prospects.

Expanding Defense Budget Remains a Growth Catalyst: While the commercial aerospace market has been recovering steadily over the past couple of quarters, the defense side of the industry has stood its ground amid the COVID-19 crisis, cushioned by steady government support. Indeed, expansionary budgetary amendments adopted by the U.S. government for defense in recent times have acted as a major catalyst for this. President Joe Biden plans to request $813.3 billion in national security spending — including $773 billion for the Pentagon —  as stated by a Bloomberg article. Impressively, this proposal reflects an increase of 4% from the approved spending for the current fiscal year and about $43 billion more than what the White House budget office had projected a year ago for fiscal 2023. Such improved budgetary provisions set the stage for industry players who are more focused on the defense business to win more contracts, which in turn should enhance their top line.

Supply Chain Issues May Hurt: Significant supply-chain disruption has been observed in the Aerospace and Defense industry, of late, courtesy of the pandemic-induced lower aircraft demand and restrictions on the movement of people and goods. This primarily affected smaller suppliers, like aircraft parts makers, especially those with heavy exposure to commercial aerospace and the aftermarket business. In particular, the United States is facing shortages and security vulnerabilities with printed circuit boards and integrated circuit substrates crucial to its weapons systems, as published in a Forbes report. Although the situation is improving, the entire impact of coronavirus on the global economy and the threat of U.S. defense electronics supply-chain disruption are unlikely to subside soon. This in turn might keep the growth trajectory of the U.S. aerospace and defense industry constricted in the near term.

The Zacks Aerospace-Defense industry is housed within the broader Zacks Aerospace sector. It currently carries a Zacks Industry Rank #92, which places it in the top 37% of more than 250 Zacks industries.

The industry’s position in the top 50% of the Zacks-ranked industries is due to a positive earnings outlook for the constituent companies in aggregate. Looking at the aggregate earnings estimate revisions, it appears that analysts have gained confidence in this group’s earnings growth potential over the past few months. Evidently, the industry’s earnings estimate for the current fiscal year has gone up 0.7% to $5.39 since Jan 31. 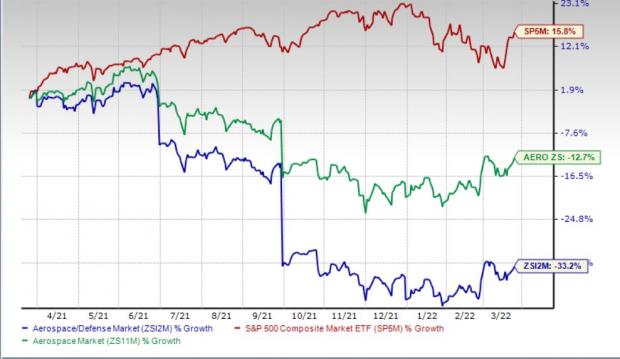 On the basis of the trailing 12-month EV/Sales ratio, which is used for valuing capital-intensive stocks like aerospace-defense, the industry is currently trading at 1.39, compared with the S&P 500’s 4.40 and the sector’s 2.13.

3 Aerospace-Defense Stocks to Keep in Your Watchlist

Huntington Ingalls: Based in Newport News, VA, Huntington Ingalls designs, builds and maintains nuclear-powered ships such as aircraft carriers and submarines, and non-nuclear ships, such as surface combatants, expeditionary warfare/amphibious assault and coastal defense surface ships. Over 70% of the active U.S. Navy fleet consists of Huntington Ingalls ships. Its CVN 73 USS George Washington is consistently progressing through its final outfitting and test phase and was approximately 94% complete, as of Dec 31, 2021. In the submarine program, the company achieved pressure hull completion for SSN 796 Virginia-class submarine New Jersey, with its delivery projected in 2023. Moreover, SSN 725 Helena remains on track for redelivery to the Navy in 2022.  On successful completion, such notable programs should significantly boost the company’s top line.

The Zacks Consensus Estimate for Huntington Ingalls’ 2022 earnings implies an improvement of 14.1% from 2021’s reported figure. The company delivered an average earnings surprise of 22.22% in the last four quarters.  HII currently carries a Zacks Rank #2 (Buy). 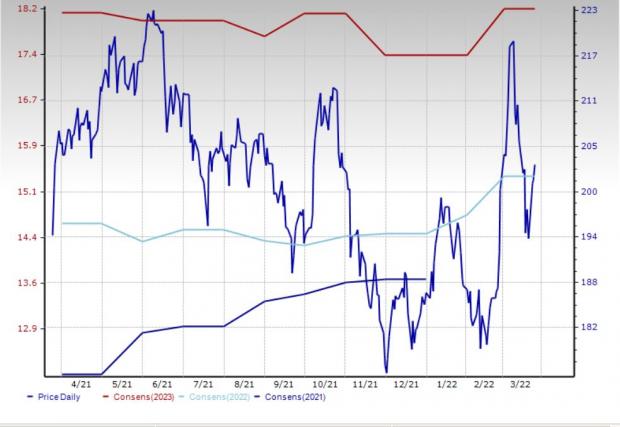 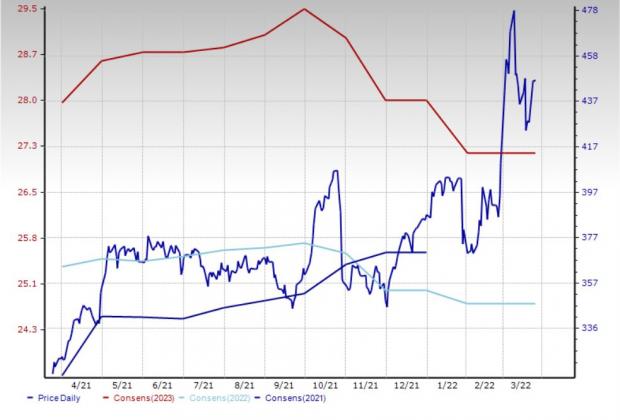 General Dynamics: Based in Falls Church, VA, General Dynamics is the leading designer and builder of nuclear-powered submarines and a leader in surface combatants and auxiliary ship design and construction for the U.S. Navy. It is also a premier manufacturer and integrator of land combat solutions worldwide along with renowned business jets. The company expects G800 customer deliveries to begin in 2023 while G400 deliveries are anticipated to begin in 2025. This should bolster General Dynamics’ position in the aircraft market. 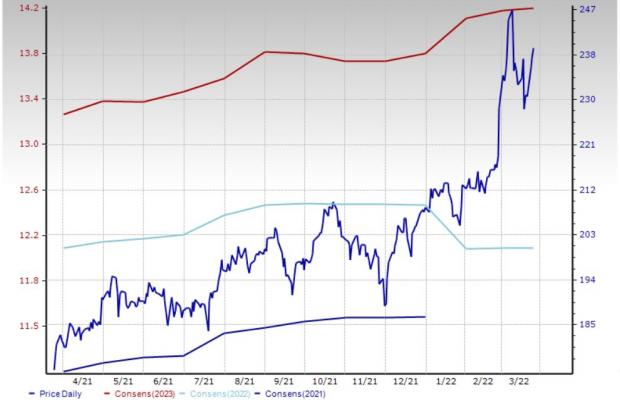