I presented a couple of highly-liquid naked call option contracts to take advantage of Riot Blockchain’s (RIOT - Free Report) momentum-fueled rally following a blow Q4 report on Friday (3/18). Today (3/25), after a period of post-earnings volatility abatement, I’ve got a bullish spread with an upside volatility kick that will provide you with a leveraged opportunity on an upside move along with downside protection.

The Fallibility Of Fiat Currencies

The fallibility of fiat currencies has been brought to the forefront of the financial markets, with economists convinced that the Federal Reserve let inflation run too hot for too long and geopolitical uncertainty reaching a 2-decade peak as Putin invades its former ally on the western front.

Bitcoin (BTC), also known as Gold 2.0, and the novel fiat currency alternative it offers with its decentralized blockchain has never looked more attractive to financial institutions.

Investors are wrestling with the hard truth that fiat currencies are far less safe than we think and that cash under your mattress will do nothing but lose value over time. The 40-year high inflation pace that we’ve reached is causing that uninvested cash to lose value at an accelerating pace.

Cryptocurrencies will be a part of our new economy whether you like it or not, and it would be prudent to invest today before their mass adaptation. Riot Blockchain, one of the world’s largest Bitcoin miners, is a perfect way to take advantage of rocketing bitcoin price in an excellent short-term momentum-fueled options trade.

Bitcoin, which underpins RIOT’s daily high-beta price action, is finally looking like it’s materially broken out back above its 50-day moving average (which itself is reversing its trend after a 3-month tailspin). Impending institutional demand is swelling in the wake of Biden’s crypto-focused executive order, a rare case where more regulation is a positive sign for an asset class as it only further legitimizes this increasingly lucid digital currency space as the fallibility of the world’s 180+ distinct fiat currencies become more evident than ever.

After a tremendous forward-looking quarter of profitable progress coupled with reviving Bitcoin demand, total open interest (the number of open contracts) on the call side of RIOT’s option chain is surging as more and more traders place bullish bets.

RIOT’s option opportunities are ripening as contract liquidity improves across strike prices and expirations. I am looking at a short-term trade (<1 month) to take advantage of near-term momentum and RIOT’s post-earnings IV compression with options contracts pulling volatility out of the premium.

The trading strategy that I am employing here is called a call ratio backspread, which involves selling a single lot of in/at-the-money call options while buying 2x/3x as many out-of-the-money calls at the same expirations with a strike price that you deem as more than attainable within the contracts life cycle.

This bullish ratio backspread allows one to generate an immediate account credit and limit downside while leveraging the upside potential to an increase in the stock’s volatility (unfortunately, this spread works in the opposite direction when IVs decline).

Collect an immediate $60 credit from the transaction while likely risking only about $100. Though, a max loss of -$340 is possible if held till expiration and RIOT closes on the dot at $25 prior to Good Friday weekend (4/14), which I deem to be extremely unlikely considering its history of borderline-egregious volatility with the breakeven levels at expiration being $21.60 & $28.40. Below is a daily payout breakdown (from today to exp.), assuming no changes in underlying volatility. 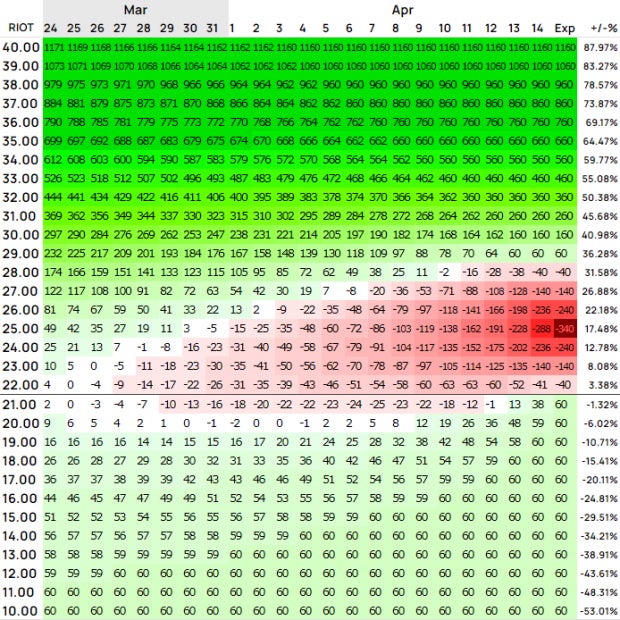 And here is the payout assuming a 25% increase in its currently inhibited IV (which I view as likely considering its current IV is nearly half of its average). 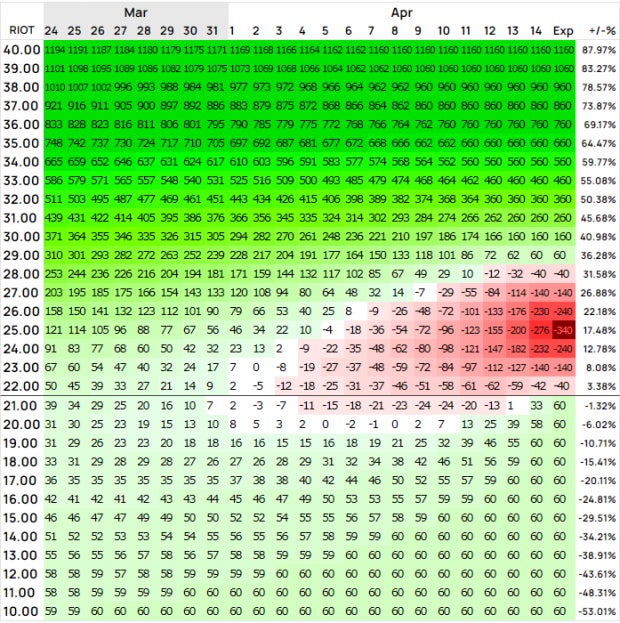 The probability of profitability on this trade is elevated with volatility. At the current levels of volatility, this trade has a 62.2% chance of generating a positive return (which could be north of $1k per spread).

I’m more bullish than ever on RIOT, with Bitcoin breaking out on the heels of bullish regulation coupled with another solid quarterly report. Riot Blockchain continues to prove its ability to rapidly expand operations, take market share, and persistently outpace its aggressive guidance.

12-month price targets are sitting between $30 and $50 a share, with most of these price targets made under the assumption that Bitcoin continues to trade at $40k. Meaning that if you are bullish on Bitcoin this upside could be significantly greater.

Riot Blockchain, now one of the world's largest publicly traded bitcoin miners following its recent acquisition of Whinstone US, is positioned to provide us with the rare and exciting opportunity to profit off the resurging crypto market's already prolific rally.

Trillions in value is yet to be added to this legitimizing asset class as institutional investors (the big money) begin to deploy capital into this ambiguous market. The opportunity cost of not being a part of this rapidly appreciating asset class is just too great not to have some exposure.

RIOT, which is closely tied to the performance of bitcoin, had initially overshot the crypto rally in the first month and a half of the year as momentum chasing traders such as the (self-proclaimed) "degenerates" on r/WallStreetBets drove this leading miner's shares far above their intrinsic value. RIOT surged as much as 385% at the beginning of 2021, but its momentum-driven valuation bubble has since deflated. The stock is now trading over 80% below its overzealous highs to the value trading opportunity we see today.

All 8 of the covering sell-side analysts call RIOT a strong buy as of this writing, with an average price target of $44 a share, with some more bullish analysts giving it targets north of $50.

U.S. cryptocurrency miners were given one of the greatest gifts they could have asked for when China and President Xi’s increasingly autocratic regime announced a reinforced ban on crypto mining earlier this year.

At the end of 2020, China controlled roughly 70% of the global bitcoin mining market, which is measured using hash rates. Hash rates are the speed at which cryptocurrencies are mined (attained through machine-based problem solving) and represent a measurement of computing power and efficiency (performance) of both individual and total market operations.

The strict crypto mining banned in Asia’s largest economy created a massive market hole, which U.S. miners like Riot Blockchain quickly filled. The U.S. is now the leading bitcoin miner by hash rate, controlling over 35% of this market, according to Cambridge Bitcoin Electricity Consumption Index (CBECI).

Riot Blockchain currently controls 12% of the U.S.'s highly fragmented bitcoin mining market and is taking more share on a seemingly daily basis, with guidance indicating a controlling market share of more than 20% by the end of 2022. This blockchain innovator's hash rate has more than quadrupled in the past year. Riot's savvy management team is projecting its hash rate will reach 12.8 EH/s (quadrupling its output in a matter of months) by the end of the year, marking its third increase in just a few months (materially above the initial guidance of 7.7 EH/s).

Its recent acquisition of Whinstone (the largest crypto mining facility in the U.S.) is the primary catalyst for its rapidly improving economies of scale-driven forecast.

Cryptocurrency mining, contrary to what your intuition tells you, is the process of verifying new transactions made with a given digital currency, and in turn, being “rewarded” for this act with new coins. Verifying a transaction involves immense computing power to validate each node on a blockchain network and an accurately updated ledger (a new block in the chain). This crypto-mining process is referred to in the cryptographic world as Proof-of-Work (PoW), which Bitcoin (the most heavily mined and leading cryptocurrency on the market) and Ethereum both employ.

The practice of mining Bitcoin is often described to laymen as solving a highly complex math problem, and the computers that help find the solution are awarded newly minted Bitcoin. In reality, it’s a speed-driven guessing game to decrypt a random code, with the fastest computers being the most successful.

Mining is a necessary operation to ensure the security of Bitcoin’s (or any other PoW digital currency’s) blockchain network, and the more miners the more secure the coin. The caveat here is that Bitcoin is becoming incrementally less lucrative to mine, with 90% of the coins (roughly 19 million) having already been mined and only 2 million of these digital coins are left to be mined (expected to be mined by 2040), and incremental PoW rewards are slowly dwindling.

Furthermore, the costs associated with mining bitcoin (energy and processing power) are extremely high and only provide profits when the cryptocurrency is trading above a threshold price. Crypto mining is all about scale, with just a few operators controlling most of this market.

Miners market share is represented by hash rates, which signifies the computing efficiency of the business). The higher the hash rate the more nodes that can be verified per second, meaning that hash rates and mining efficiency are directly correlated. Unfortunately, this positive hash rate correlation is also a factor of energy usage (higher hash rates require more energy).

The total global Bitcoin mining market has a hash rate of 120 EH/s, with U.S. miners controlling more than 1/3rd of it after China’s recent regulatory-fueled exit from crypto mining.

There has been growing attention surrounding the excessive use of energy required to power bitcoin mining facilities. Elon Musk is the most notable character voicing concerns about the use of fossil fuels to power digital asset mining operations, deciding to halt Tesla's bitcoin usage earlier this year because of it. Energy is also the most significant variable cost for blockchain-based enterprises like Riot, so it's central to assessing an investment in this unique space.

Riot's primary operations are in Texas, ironically one of the cleanest and cheapest energy states (considering it's the oil capital of the U.S.). The Electric Reliable Council of Texas (ERCOT) powers one of the few deregulated energy markets with a vast competitive push towards inexpensive and sustainable sources. Wind and solar make up nearly 30% of the ERCOT market's energy capacity, with relatively lower-carbon natural gas generating just over half.

Like it or not, bitcoin is here to stay, and it's time to get some portfolio exposure if you haven't already. RIOT presents us with a unique opportunity to acquire bitcoin exposure at a sizable discount as its underlying profit driver takes flight and its controlling market share proliferates.

RIOT has a significant competitive advantage in a market where scale means everything, with its recent acquisition of Whinstone leapfrogging its hash rate expansion. I would jump on this trade today before the window of opportunity for this rare high-growth value-play disappears.

Profit Regardless of Market Direction