PriceSmart, Inc. has seen its stock price tank over 14% since the warehouse club company posted its fourth-quarter and fiscal 2018 financial results on October 25. The big drop off is likely due to PriceSmart’s sinking bottom-line estimates and the resignation of long-time CEO Jose Luis Laparte.

PriceSmart, which is headquartered in San Diego, is the largest operator of membership warehouse clubs in Central America and the Caribbean. The company posted fiscal fourth-quarter revenues of $777.9 million, which marked a 6% jump from the year-ago period’s $733.5 million. However, comparable store sales climbed just 0.2%.

Meanwhile, PriceSmart’s operating income fell from $30.8 million in Q4 of 2017 to $27.2 million. The firm also announced that its CEO and president Jose Luis Laparte will resign, effective November 16. Laparte took over as chief executive in July 2010 and oversaw a period of great success in terms of stock price movement from that time until PSMT stock hit its all-time high at the end of 2013.

Choosing a new CEO could end up lifting PriceSmart, but investors have clearly reacted negatively so far. The company currently operates 41 warehouse clubs in 12 countries and one U.S. territory, with 3 million cardholders. This includes seven locations in Colombia and Costa Rica, along with five in Panama. Looking ahead, the company expects to open its 44th warehouse club in the fall of 2019.

Moving on, we can see that PriceSmart stock was once a high-flyer. With that said, shares of PSMT have plummeted over 40% in the last five years, compared to the S&P 500’s nearly 58% surge.

PriceSmart stock is down roughly 19% since the start of the year, driven by its post-fourth quarter earnings release selloff. Shares of PSMT closed regular trading at $69.77 per share on Monday, which marked a roughly 26% downturn from its 52-week high of $94.45 per share. 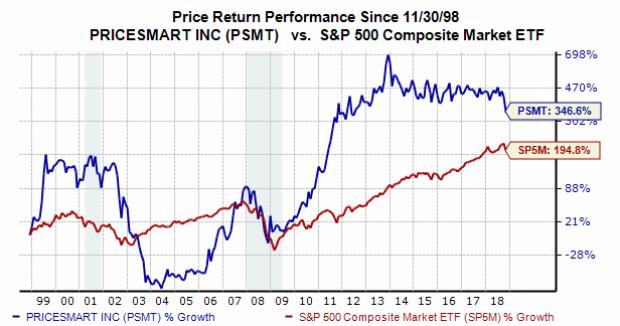 Now that we have covered some of PriceSmart’s recent news, it’s time to take a look ahead. Our current Zacks Consensus Estimate is calling for the firm’s quarterly revenues to climb 3.7% to reach $795.30 million. The company’s fiscal 2019 revenues are projected to hit $3.32 billion, which would mark a 4.7% jump from 2018.

Moving onto the bottom end of the income statement, PSMT’s adjusted Q1 earnings are expected to sink by 29.7% to hit $0.52 per share. Plus, PriceSmart’s Q2 EPS figure is projected to slip by 4.5%.

We should note that PSMT has seen some negative earnings revision activity over the last 30 days. The company’s consensus estimates have also dropped off significantly during this same stretch for Q1 and Q2, as well as for its current fiscal year.

PriceSmart is currently a Zacks Rank #5 (Strong Sell) based on its negative earnings revision activity. The company also rocks a “D” grade for Value and an “F” for Momentum in our Style Scores system. Furthermore, PriceSmart has missed our quarterly earnings estimates in four out of the last six quarters.

Bear of the Day: Astronics (ATRO)