Oil prices have obviously been on the move. There are several reasons why. Among them, general inflationary pressures, the conflict in Europe, and increased demand from consumers. For the average American, it can feel like a tax. If you’re looking for a way to get some of that revenue back, just go ahead and invest in oil companies. That’s the story with today’s Bull of the Day, Marathon Oil (MRO - Free Report) . 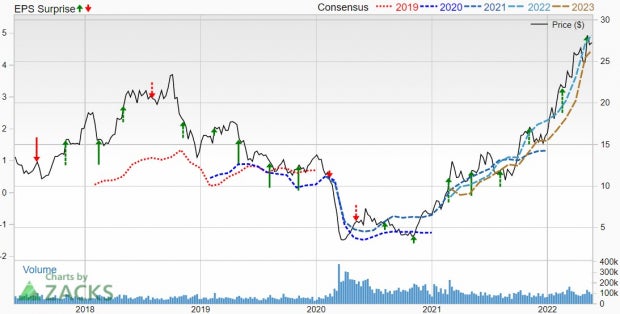 Marathon is currently a Zacks Rank #1 (Strong Buy). The reason for the favorable Zacks Rank is that over the course of the last 60 days, eight analysts have increased their earnings estimates while only one has dropped them. For next year, nine analysts have upped the ante while only a single analyst has cut estimates. The bullish behavior has pushed up our Zacks Consensus Estimates for the current year from $2.83 to $4.94 while next year’s is up from $2.04 to $4.46.

The moves have helped underpin a rally in the stock that has taken it from under $4 in late 2020 to over $27 now. A quick look at the Price, Consensus, and EPS Surprise Chart reveals the strong trends in both earnings and the stock price.

Bull of the Day: Albemarle (ALB)