Companies in the Semiconductor – General industry are at the forefront of the ongoing technological revolution based on HPC, AI, automated driving, IoT and so forth. These semiconductors also enable the cloud to function and help analyze the data into actionable insights that can be used by companies to operate more efficiently.

The pandemic led companies to ramp up technology investments in order to stay operational when it was unsafe for us to go to work or meet people. But since this meant that a lot of infrastructure was built out in advance, analysts currently expect demand to slow down in the near future. Longer-term trends continue to favor digitization, cloud, AI, etc., which will drive strong demand for semiconductors.

This is not a great place to invest in right now, but STMicroelectronics and Texas Instruments look relatively attractive.

The Zacks Semiconductor-General Industry is a stock group within the broader Zacks Computer and Technology Sector. It carries a Zacks Industry Rank #197, which places it in the bottom 22% of more than 250 Zacks industries.

The group’s Zacks Industry Rank, which is basically the average of the Zacks Rank of all the member stocks, indicates that near-term prospects aren’t too bright. Our research shows that the bottom 50% of the Zacks-ranked industries underperforms the top 50% by a factor of 1:2.

An industry’s positioning in the top 50% of Zacks-ranked industries is normally because the earnings outlook for the constituent companies in aggregate is encouraging. The opposite is true for stocks in the bottom 50% of industries. In this case, the aggregate earnings estimate for 2022 while displaying an improving trend in the last few months, is up a mere 2.3% from the year-ago level. The aggregate earnings estimate for 2023 is down 17.9% from last year.

Tracking the performance of the Zacks Semiconductor – General Industry over the past year shows that the industry has traded higher than both the broader Zacks Computer and Technology Sector and the S&P 500 index. 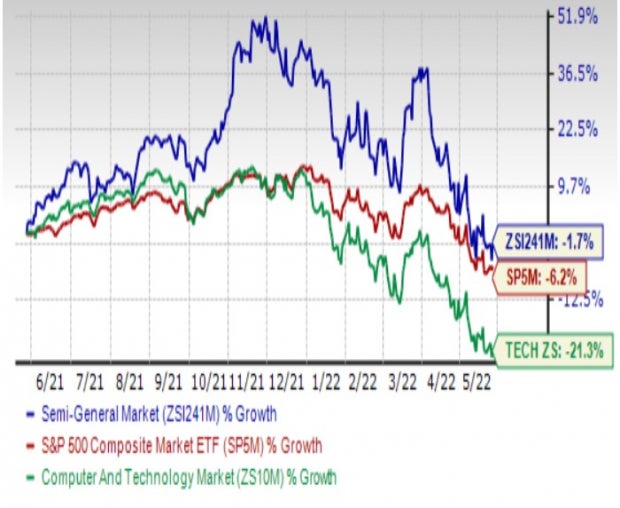 On the basis of forward 12-month price-to-earnings (P/E) ratio, which is a commonly used multiple for valuing semiconductor companies, we see that the industry is currently trading at 22.3X, which is its lowest multiple over the past year. However, the S&P 500 trades at 17.4X while the sector trades at ’s 20.3X, so the industry appears overvalued in both these comparisons. 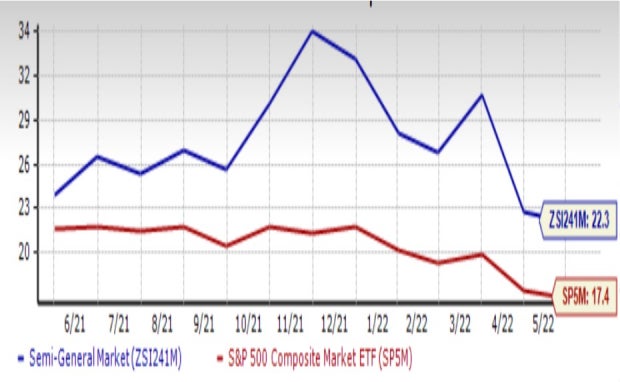 STMicroelectronics continues to see strong demand across all except the imaging product line and all markets except China (because of pandemic-induced shutdowns). Favorable mix and strong pricing remain positive for profitability. Given its exposure to the automotive market, the replenishment of inventories across the automotive supply chain and the ongoing electrification and digitalization are positives, despite the lower-than-expected number of cars produced.   Industrial, the other significant end market for STMicroelectronics is currently being driven by factory automation, power and energy applications, as well as building and home control. Industrial electrification and digitalization are the main trends accelerating the increase in semiconductor content.

STM beat the Zacks Consensus Estimate for the fourth quarter by 11.3%. In the last 30 days, the current year EPS estimate of this Zacks Rank #3 (Hold) stock increased 13 cents (4.1%).

The shares of the company are up just 0.2% over the past year, mainly because of the pressure they have been under since the beginning of this year and particularly, since March. 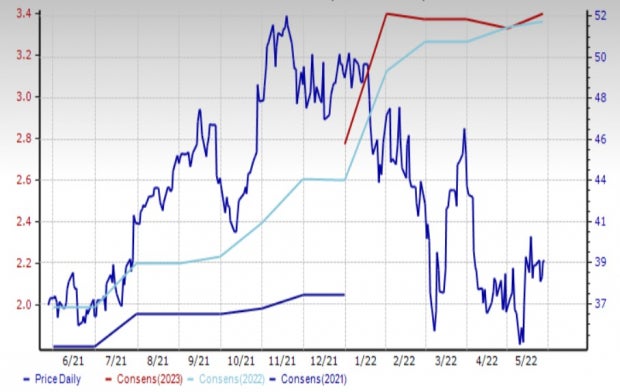 Texas Instruments has significant exposure to the industrial and automotive markets, where the semiconductor shortage is driving strong demand and pricing strength. But like STM, the company also sees some impact from China’s pandemic-related shutdowns. TI is known for operating a flexible manufacturing model (including its 300mm facilities) that includes both internal capabilities and external sources, thus making it a bit of a defensive play in downcycles. But the secular growth prospects in its served markets coupled with the current chip shortage is driving the company to increase capacity. Those extra costs notwithstanding, Texas Instruments continues to generate solid cash flows. It also returns cash to investors through regular share repurchases and dividends. This is one of the steadiest performing companies and continues to deliver, quarter upon quarter.

Shares of this Zacks Rank #3 company are down 7.9% over the past year, mainly due to the broad market weakness. 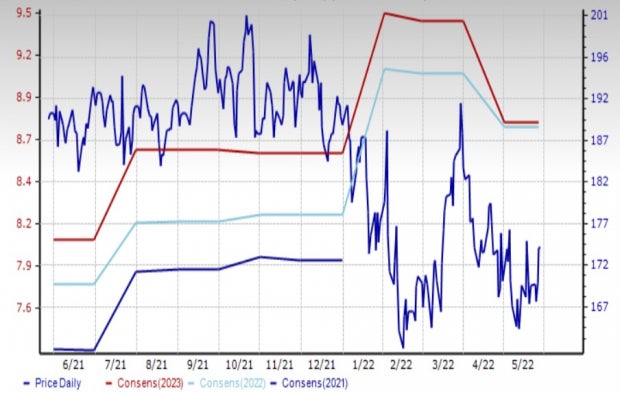 Domestic Auto Industry in a Fix: 2 Stocks Still Worth Considering