3 Broadcast Radio & TV Stocks to Watch in a Prospering Industry

The Zacks Broadcast Radio and Television industry has been benefiting from rising demand for streaming content amid an increasing rate of cord-cutting. Industry participants like Warner Bros. Discovery (WBD - Free Report) , Fox Corporation (FOXA - Free Report) and Gray Television (GTN - Free Report) are benefiting from a huge spike in digital content consumption. Diversified content offerings, which are original, regional, short and suitable for small screens (smartphones and tablets), improved Internet speed and penetration, and technological advancement are benefiting the industry participants. As monetization and revenues in terms of ad-spend continue to be subdued, profit protection and cash management with greater technology integration have gained strategic significance and are expected to aid these companies in driving the top line in the near term.

The Zacks Broadcast Radio and Television industry comprises companies offering entertainment, sports, news, non-fiction and musical content over television, radio and digital media platforms. These companies majorly derive revenues from the sale of television and radio programs, advertising slots as well as subscriptions. Notably, these industry players are increasing their spending on research and development as well as sales & marketing in order to stay afloat in an era of technological advancements with increased demand for VR and Internet Radio among audiences. The industry is likely to remain focused on sustenance at current levels along with a renewed emphasis on flexibility, which would accelerate the move to a variable cost model and reduce fixed costs.

4 Broadcast Radio and Television Industry Trends to Watch Out For

Shift in Consumer Preference a Key Catalyst: To adapt to the changes in the industry, companies are coming up with varied content for over-the-top (OTT) services in addition to linear TV. Additionally, they are adding OTT services to their content portfolios. The availability of streaming services on a wide range of platforms is helping such services easily reach a global audience. It is also helping them to expand their international user base, which in turn, attracts advertisers to their platforms, thereby boosting ad revenues. Moreover, the use of services to help advertisers measure their ROI and enhance their use cases is expected to benefit advertisers and industry participants. Also, major leagues and events such as NFL, NHL, Olympics, European Games, EPL and elections attract significant ad dollars. The recent resumption of live sports events after delays and cancellations over the past year is expected to boost advertiser demand.

Increased Digital Viewing Aids Content Demand: Many industry participants who are either launching their own OTT services or acquiring other OTT services are banking on user insights to deliver the right content. Increased digital viewing is making consumer data easily available to companies, thereby allowing them to apply AI and machine-learning techniques to create/procure targeted content. The move not only boosts user engagement but also lets industry participants raise the prices of their services at an appropriate time without the fear of losing subscribers.

Coronavirus Hurts Production and Ad Demand: Industry participants are bearing the brunt of coronavirus-induced macroeconomic woes. Advertising is a major source of revenues for this industry, which has been badly hit by the coronavirus. Recovering yet low ad demand and reduced spending are expected to hurt the top line in the near term. Moreover, the industry players are facing stiff competition from tech and social media companies for ad dollars. This has been a major impediment to growth.

Low-Priced Skinny Bundles Hurt Revenues: Increase in cord-cutting has forced industry participants to offer “skinny bundles.” These services, which are available through the Internet, often contain fewer channels than a traditional subscription and therefore are cheaper. The move is in line with changing consumer viewing dynamics as growth in Internet penetration and advancements in mobile, video and wireless technologies have boosted small-screen viewing. The alternative services are expected to keep users glued to their platforms, thereby increasing the need to produce more content. However, the low-priced skinny bundles are likely to dampen top-line growth.

The Zacks Broadcast Radio and Television industry is housed within the broader Zacks Consumer Discretionary sector. It carries a Zacks Industry Rank #92, which places it in the top 37% of more than 250 Zacks industries.

The industry’s position in the top 50% of the Zacks-ranked industries is a result of a positive earnings outlook for the constituent companies in aggregate. Looking at the aggregate earnings estimate revisions, it appears that analysts are optimistic on this group’s earnings growth potential.

The Zacks Broadcast Radio and Television industry has underperformed the broader Zacks Consumer Discretionary sector and the S&P 500 Index over the past year. 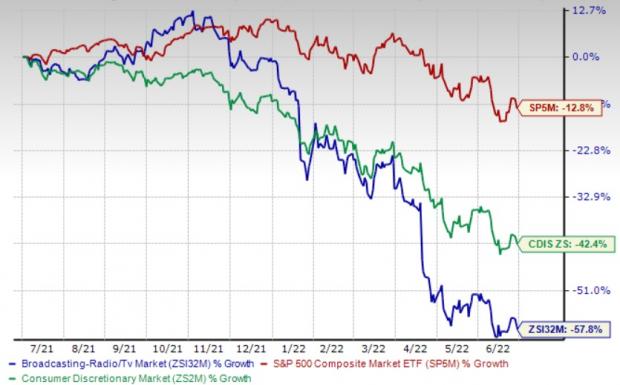 On the basis of trailing 12-month EV/EBITDA (Enterprise Value/ Earnings before Interest Tax Depreciation and Amortization), which is a commonly used multiple for valuing Broadcast Radio and Television stocks, the industry is currently trading at 16.52X versus the S&P 500’s 12.19X and the sector’s 9.17X.

The Zacks Consensus Estimate for 2022 earnings has remained steady at $5.27 per share over the past 60 days. Grey Television’s shares are down 16.2% year to date. 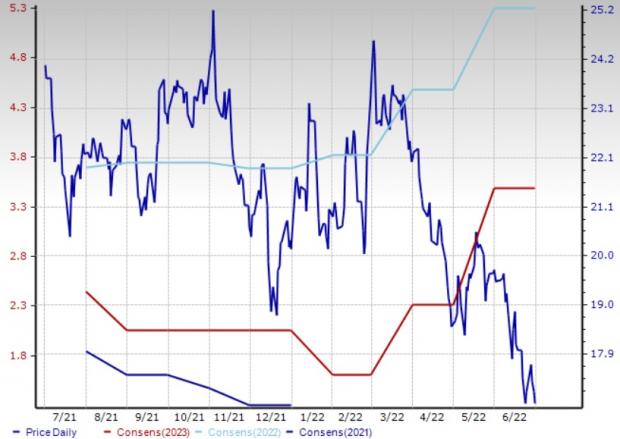 Fox: This New York-based company is riding on the growing demand for live programming. The robust adoption of Fox News and Fox Business Network (FBN) is expected to drive the user base in the near term. This Zacks Rank #3 (Hold) company generates a major portion of advertising revenues from live programming, which is relatively immune to the rapidly intensifying competition from subscription-based video-on-demand services. 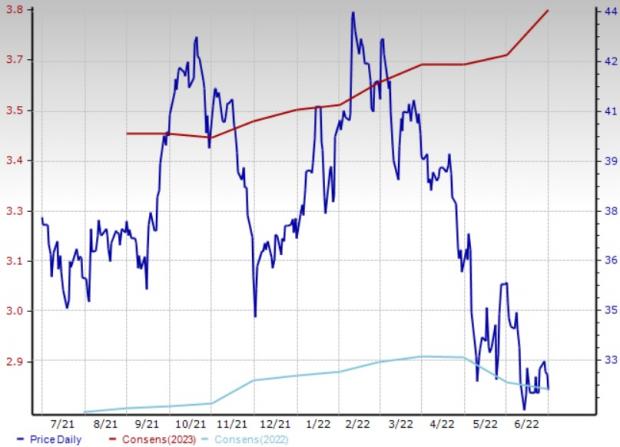 Expanding sports coverage based on partnerships with the likes of PGA TOUR, Tiger Woods and Olympics is a major growth driver for Discovery. Further, recovery in advertising spending, primarily in the international markets, is a major positive.

Markedly, the stock has declined 43% year to date. Notably, the Zacks Consensus Estimate for its 2022 earnings has remained steady at $1.51 per share over the past 30 days. 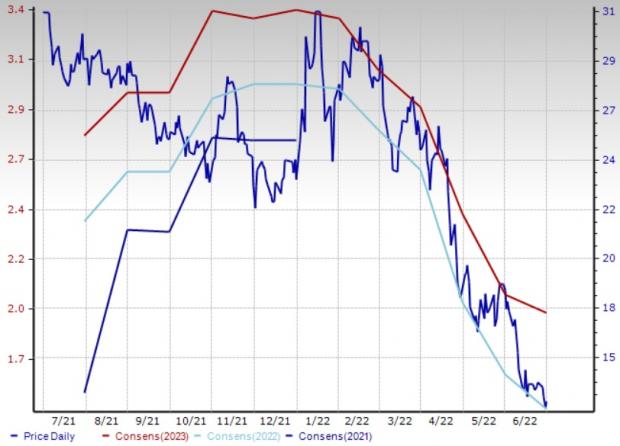 3 Stocks to Bet On in an Upbeat Auto Retail Industry