Bull of the Day: Intel (INTC)

Intel Corporation (INTC - Free Report) has been a chipmaking powerhouse for decades after it officially became the world’s largest semiconductor supplier in the early 1990s. Today’s market is more crowded and Intel has faced some serious setbacks. But Intel is coming off an impressive quarter and its Q4 and full-year projections look strong.

Intel announced earlier in November that its board approved a $15 billion increase in its stock repurchase program. Right off the bat, this likely signals that Intel executives believe INTC stock is undervalued. Plus, it helps create more value for shareholders as the relative ownership stake of each investor increases.

Meanwhile, Intel posted strong third quarter financial results at the end of October. The company’s revenues surged 19% to $19.16 billion, which not only topped expectations but marked an all-time Q3 record. Some of Intel’s more buzz-worthy segments, such as IoT and its Mobileye autonomous vehicle unit, both achieved record revenue.

On the other side, the company’s adjusted quarterly earnings soared 39% to $1.40 per share. Intel also raised its fourth-quarter earnings and revenue outlook.

Investors should note that Intel has delayed the launch of its next-generation chips, which has helped some of its rivals, including firms like Advanced Micro Devices (AMD - Free Report) . “We continue to make good progress on 10-nanometer,” interim CEO Robert Swan said on the company’s Q3 earnings call. “Yields are improving, and we're on track for 10-nanometer-based systems on shelves during the holiday 2019 selling season.”

Wall Street will continue to monitor Intel’s progress on its 10nm products that are expected to be a crucial part of its future. And before we move onto more of Intel’s fundamentals, we should also note that Amazon (AMZN - Free Report) , which is one of Intel’s biggest server CPU clients, just unveiled its own server processors for its cloud-computing division. Amazon said the move will help save the company money. However, Intel is expected to remain a major supplier of chips for Amazon’s cloud servers and high-end computing going forward.

Shares of Intel are up roughly 10% over the last year, which outpaces the S&P 500’s 2.1% climb and its industry’s 3% decline. With that said, INTC stock has plummeted 12% in the past six months as part of the larger market downturn driven by the likes of Apple (AAPL - Free Report) and other tech giants.

Yet, shares of Intel have climbed 7% in the last month. Intel stock closed regular trading Wednesday at $48.86 per share, which marked a roughly 15% downturn from its 52-week high of $57.60 per share. 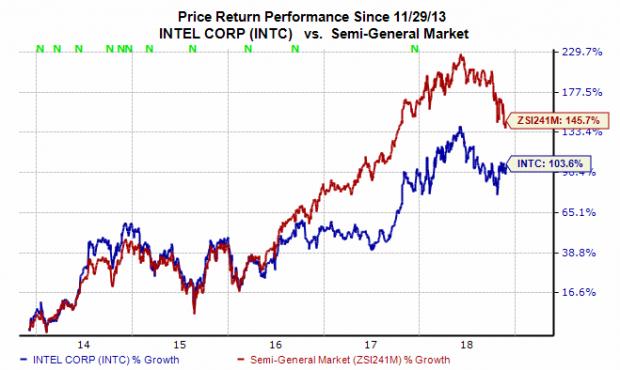 Moving on, Intel is currently trading at 10.5X forward 12-month Zacks Consensus EPS estimates, which represents a discount compared its industry’s 13.3X average and the S&P’s 16.X—Nvidia (NVDA - Free Report) is currently trading at 24.1X. Over the last year, INTC stock has traded as high as 14.8X, with a one-year median of 13.1X.

More importantly, Intel stock currently rests right near its five-year low. Therefore, investors should be able to say with some confidence that INTC’s valuation picture appears rather attractive at its current level.

Looking ahead, Intel’s Q4 revenues are projected to jump 11.5% to $19.01 billion, based on our current Zacks Consensus Estimate. The chipmaker’s full-year revenues are expected to climb 13.5% to $71.2 billion.

Investors should also note that Intel’s earnings outlook picture has turned far more positive recently with its Q4 estimate up $0.13 per share over the last 60 days. Meanwhile, the company’s full-year earnings estimate has jumped by $0.40 during this same stretch. 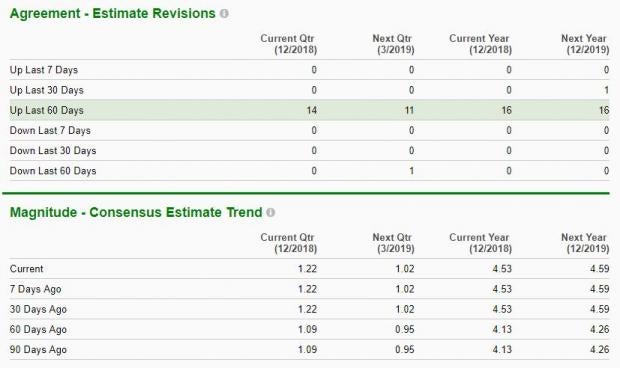 Intel is currently a Zacks Rank #1 (Strong Buy) based largely on its recent earnings estimate revision trends. INTC also rocks an overall “A” VGM score. Therefore, Intel looks as though it might be a solid buy at this point given its top and bottom-line growth prospects, coupled with its current valuation picture.

With that said, Intel has faced major setbacks on its vital 10nm roll out. Plus, chip stocks have been historically cyclical. But Intel is a dividend payer that also sits well below its 52-week high.

Bull of the Day: On Deck Capital (ONDK)