Spectrum Brands (SPB - Free Report) , a Zacks Rank #5 (Strong Sell) stock, is a branded consumer products company. SPB operates globally through three segments: Home and Personal Care; Global Pet Care; and Home and Garden. The company sells home appliances under recognized brands such as Black and Decker and George Foreman. Its pet care products include food, training, and health and grooming items under names such as Nature’s Miracle and Wild Harvest. In addition, SPB offers outdoor insect and weed control solutions under brand names like Rid-A-Bug and The Ant Trap. Spectrum Brands Holdings was incorporated in 2009 and is headquartered in Middleton, WI.

As a general rule of thumb, we want to target stocks in the top-performing industries as historical research has shown that roughly half of a stock’s future price appreciation is due to its industry grouping. We therefore want to avoid stocks in the bottom 50% of all Zacks Ranked Industries.

Candidates in the worst-performing industry groups and sectors can often represent good shorting opportunities, as their industry performance provides a headwind to any potential rally attempts. While individual stocks have the ability to outperform even when included in poor-performing industries, their industry association serves as a headwind for any potential rallies. SPB is swimming against the current and the stock is confirming this notion as it continues to make a series of lower lows.

The consumer products company has missed earnings estimates in three of the past four quarters. Earlier this year, SPB reported a fiscal Q1 loss of $-0.06 per share, a -220% miss versus the $0.05 consensus estimate. SPB’s lone beat over the last year came in the company’s fiscal second quarter, when it surpassed the $0.40/share estimate by just one cent.

Over the last four quarters, Spectrum Brands has posted an average earnings miss of -61.77%. The company is not only consistently missing EPS estimates, they are doing so by a wide margin. When you’re missing consensus estimates by that amount over time, you’re going to be fighting against the current when it comes to the stock price. Consistently falling short of earnings estimates is a recipe for underperformance, and SPB is no exception.

Future consensus earnings estimates are falling along with the stock. For the fiscal third quarter, analysts have slashed their EPS estimates by 34.43% in the past 60 days. The Zacks Consensus Estimate is now $0.40/share, which translates to a -74.52% earnings regression compared to the same quarter a year ago. Sales are expected to decline -17.7% to $957 million. Falling earnings estimates are always a concern, but a decline of this magnitude is a big red flag. If the company continues its recent streak of earnings misses, more pain will likely be ahead for the stock.

As illustrated below, SPB is in a sustained downtrend. Notice how the stock plunged below both the 50-day (blue line) and 200-day (red line) moving averages and is making a series of lower lows. It’s also important to point out that both moving averages are sloping downward – a good sign for the bears. 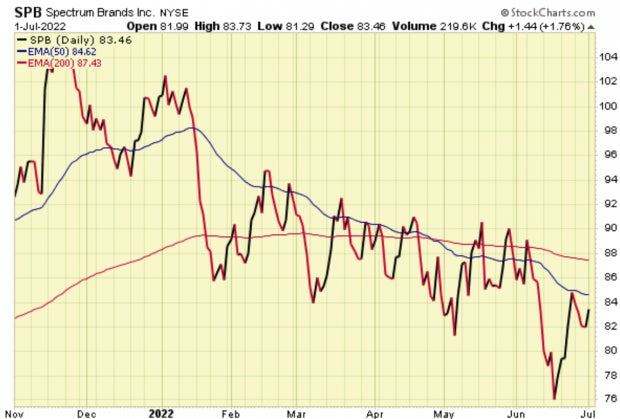 The death cross, a technical pattern in which a stock’s 50-day moving average crosses below the longer-term 200-day moving average, occurred earlier this year. The stock has fallen over 20% from its peak last year and is showing no signs of a bottom.

Even with the recent decline, Spectrum Brands is relatively overvalued, irrespective of the metric used:

Our Zacks Style Scores illustrate a deteriorating investment picture for SPB, as the company is rated a second-worst possible ‘D’ in our Value category and has an overall ‘C’ VGM score. Recent earnings misses signal more trouble on the horizon. Falling future earnings estimates are a big red flag and need to be respected. These will likely serve as a ceiling to any potential rallies, nurturing the stock’s downtrend.

The fact that SPB is included in a bottom-performing industry group and as well as a bottom-tier sector simply adds to the growing list of concerns. Investors will want to steer clear of an overvalued SPB until the situation shows major signs of improvement.