Activision Blizzard (ATVI - Free Report) , a Zacks Rank #5 (Strong Sell), resides in the Zacks Toys – Games – Hobbies Industry, which currently ranks in the bottom 25% of all Zacks Industries. Due to its unfavorable Zacks Industry ranking, we expect it to underperform the market over the next three to six months.

Activision Blizzard is a leader in video game development and an interactive entertainment content publisher, most well-known for Call of Duty.

Over the last year, ATVI shares have struggled immensely, declining approximately 16% in value and underperforming the S&P 500 by a wide margin. 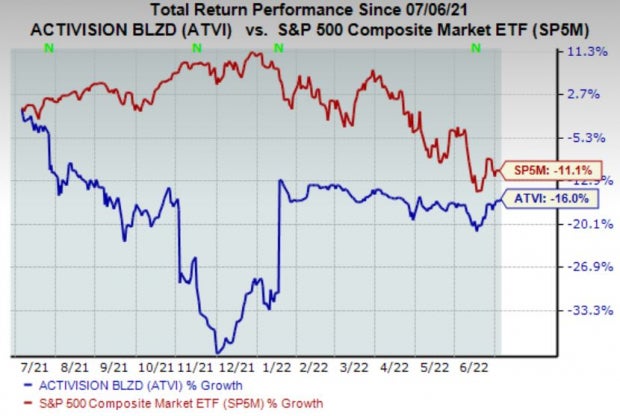 As we can see, there was a sharp move upward in January due to the news of Microsoft acquiring the company.

The company has recently struggled, reporting top and bottom-line results under expectations in its latest two earnings releases. Regarding the bottom-line, ATVI reported quarterly EPS of $0.38 in its latest quarter, missing the Zacks Consensus Estimate of $0.73 by a concerning 48%.

In fact, the average EPS surprise over the last four quarters has been -7.7%.

Pivoting to the top-line, quarterly sales results of $1.5 billion in its latest quarter missed the $1.8 billion estimate by nearly 18%. It was the company’s second consecutive revenue miss, with the other one also being in the double-digits at 11%.

ATVI’s valuation levels appear a bit stretched, further displayed by its Style Score of a D for Value. Its 31.6X forward earnings multiple is undoubtedly pricey and is well above its five-year median value of 27.1X.

Analysts have extensively dialed back their earnings estimates over the last 60 days with a 100% revision agreement percentage. For the upcoming quarter, the $0.45 per share estimate reflects a disheartening 50% decrease in earnings from the year-ago quarter.

Additionally, the $2.82 per share estimate for the current fiscal year represents a nasty 25% decline in earnings year-over-year.

Top-line projections show softening as well. For the upcoming quarter, the Zacks Consensus Sales Estimate of $1.5 billion reflects a 21% decrease from year-ago quarterly sales of $1.9 billion.

ATVI shares have been the victim of a double-digit valuation slash over the last year. This, paired with the earnings picture softening, paints a grim picture for the company within the short term.

The company is a Zacks Rank #5 (Strong Sell) and a stock that investors will be better off staying away from for now.

Instead, investors should pivot to stocks that either carry a Zacks Rank #1 (Strong Buy) or Zacks Rank #2 (Buy) – the odds of reaping considerable gains are much higher within the companies that carry these ranks.