3 Tech Titans With Hefty Acquisitions in 2022

The market’s performance as of late has been stellar. After a tough first half to start 2022, investors have thoroughly enjoyed the rally.

Although the majority of headlines throughout the year have been negative, there have been many positive ones as well, such as acquisition news.

Below is a chart illustrating the year-to-date share performance of all three companies while blending in the S&P 500 as a benchmark.

Companies aim to spur growth and increase size through acquisitions. Bigger is better, as small companies don’t have the cost-saving advantages that larger companies possess.

Let’s dig a little deeper into each company’s acquisition and examine the expected benefits.

Alphabet (GOOGL - Free Report) , the Google parent, is one of the most innovative tech companies in the world, with its Google Cloud platform finding significant success. The company is so deeply intertwined within the web that it feels impossible to imagine the internet without it.

Earlier in the year, Alphabet announced plans to acquire Mandiant in a deal valued at $5.4 billion, or $23 per share. Mandiant is a dynamic cyber defense and response solutions provider, utilizing its Mandiant Advantage software as a service cloud-based platform.

The acquisition is expected to complement Google Cloud’s strengths in security. GOOGL plans to enhance its security offerings with the deal, delivering an end-to-end security operations suite with more capabilities to assist its cloud customers.

Google Cloud has experienced supercharged growth – since 2018, Google Cloud revenue has soared by a remarkable 231%.

Alphabet is known for generating immense revenue, and that’s precisely what projections allude to; for the company’s current fiscal year, revenue is forecasted to come in at $237 billion, a rock-solid 12% year-over-year uptick. 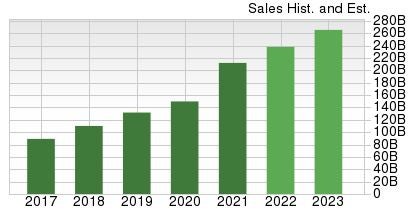 Microsoft (MSFT - Free Report) , another tech titan in the space, has been one an incredible investment over the last five years. As of late, the company’s gaming segment has proved to be a solid contributor to its top-line, and Microsoft wants to capitalize.

In an effort to bolster its stance in the gaming industry, Microsoft revealed its plans to purchase Activision Blizzard (ATVI - Free Report) for a massive $68.7 billion.

Activision Blizzard is a leader in video game development and an interactive entertainment content publisher, well-known for titles including Call of Duty and World of Warcraft.

In addition, the company’s bottom-line is in excellent health; for MSFT’s current fiscal year (FY23), the Zacks Consensus EPS Estimate resides at $10.14, good enough for a 10% year-over-year uptick. 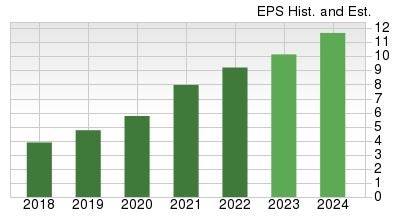 AMD announced its acquisition of Pensando, a company with a leading distributed services platform, in a deal valued at $1.9 billion. With AMD looking to bolster its Data Center Solution capabilities, it seems like a perfect match.

Pensando states that its programmable packet processor provides up to 13x better performance than its rivals’ similar products. Its processor controls how workloads move through hardware infrastructure, bouncing tasks off the CPU whenever able, considerably increasing efficiency.

AMD’s growth prospects are stellar. Earnings are forecasted to soar a remarkable 56% in FY22, and the company’s top-line looks to register a 55% uptick. 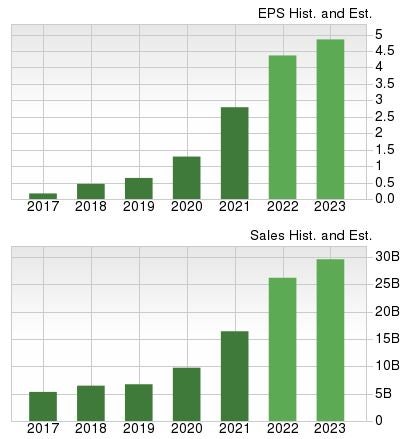 While the majority of market news has been adverse throughout the year, there have still been some announcements worth celebrating, such as all three of the above companies’ acquisitions.

Acquisitions allow companies to get their hands on more expertise and technology, providing them with the flexibility needed to innovate continuously. After all, if companies don’t adapt, the consequences could be severe.

In addition, acquisitions are generally a sign of strong financial health. Growth is the name of the game, and these three companies are just playing along.

These Stocks Rally in Both Bull and Bear Markets