Powerful 'Buy' Signal Has This Energy Play at All-Time Highs

Investing with the overall trend is an important requirement for profitable stock investing. We’ve all heard the phrase “the trend is your friend”, but investing in the direction of the trend can truly help reduce timing risk for investors.

Limiting purchases to stocks that are in a price uptrend can make all the difference between winning and losing portfolios, particularly in years such as this one. It often pays to allow price to dictate buying and selling decisions, rather than trying to predict which direction a stock will take in the future.

Employing a trend-following system can also help investors gravitate toward the best opportunities. The stock market is dynamic, whereby leading stocks and industry groups are constantly changing. This year, we’ve witnessed the energy sector dominate returns as these companies have seen their earnings bolstered by higher energy prices. While the sector has come down off the peak, one energy company has gone on to buck the trend and print new all-time highs.

It is far more profitable to own stocks of companies that produce commodities than the commodities they produce. In the following example, we’ll illustrate a return comparison of a producer versus its underlying commodity, which in this case is coal.

Consol Energy’s return year-to-date? 202% - more than double that of coal prices. We can see in this example that an investment in a stock that produces the commodity generated a much greater return than an investment in the underlying commodity itself.

And as we zoom out a bit, notice the powerful cup-with-handle pattern (highlighted in green) that has propelled the stock to new all-time highs. Even as the energy sector has pulled back over the last month, CEIX has continued its bullish run. 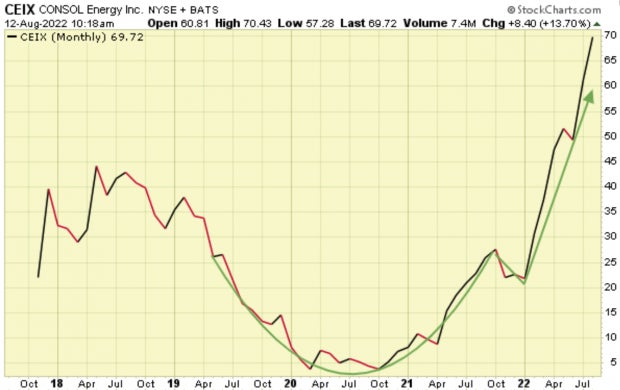 Consol Energy has exceeded earnings estimates in three of the past four quarters. The coal producer most recently delivered Q2 EPS last week of $3.42/share, an 86.89% beat over the $1.83/share estimate. CEIX has posted a trailing four-quarter average earnings surprise of 15.75%, aiding the stock’s return over the past year.

Analysts have raised their full-year EPS outlook by +0.74% in the past 60 days. The Zacks Consensus Estimate now stands at $9.55/share, a staggering 363.59% growth rate relative to last year.

Make sure to put CEIX on your watchlist if you haven’t already done so.