Exxon’s outlook remains impressive even as oil prices cool. Plus, XOM’s valuation and dividend payout help make it worth considering as part of a diversified long-term portfolio and during the exuberant stock market rebound.

Exxon is one of the world’s largest publicly traded energy providers and chemical manufacturers, with a diverse portfolio of offerings that help drive modern economies. XOM runs upstream operations, with oil and natural gas exploration and development around the world. The firm is also a leading refiner and marketer of petroleum products. These segments are poised to remain Exxon’s lifeblood for the foreseeable future.

Exxon’s executive team is, of course, more focused than ever on the future. These efforts include its product solutions segment that aims to help reduce greenhouse gas emissions and plastic waste by “developing more sustainable products such as lower-emission fuels, chemical performance products and next-generation lubricants and plastics.”

Exxon is also actively investing in hydrogen technology, biofuels, and other lower-emission fuels. On top of that, XOM continues to make progress on the carbon capture and storage fronts.

The Oil and Energy Boom

Oil and energy experienced a rough stretch during the 2010s as oil and natural gas production in the U.S. boomed. Part of the energy sector’s decline was due to the large increase in supply, driven by the advent of hydraulic fracturing (fracking). At the same time, the push toward renewable energy saw some on Wall Street avoid investing in oil and gas.

The so-called lost decade for oil and gas companies forced Exxon and others to reevaluate every aspect of their businesses, slimming down operations to run more efficiently than ever. The cost-cutting measures are now paying off in a huge way amid rebounding oil and energy prices.

Exxon is investing in a lower-carbon future and the green energy boom appears here to stay. Yet, the comeback off the covid lows and the huge boom in 2022 helped cement the critical roles crude and natural gas play in the global economy.

Oil and natural gas will likely continue to be some of the backbones of economies around the world for decades to come. And the Russian invasion of Ukraine highlighted just how important Exxon and other titans are, as supplies struggle to meet growing global demand.

Exxon and others benefitted from rising oil and energy prices amid the huge rebound in demand as the U.S. and other economies roared back to life. Travel, including air travel, has already mounted a serious comeback and broader energy demand is attempting to return to pre-covid levels. 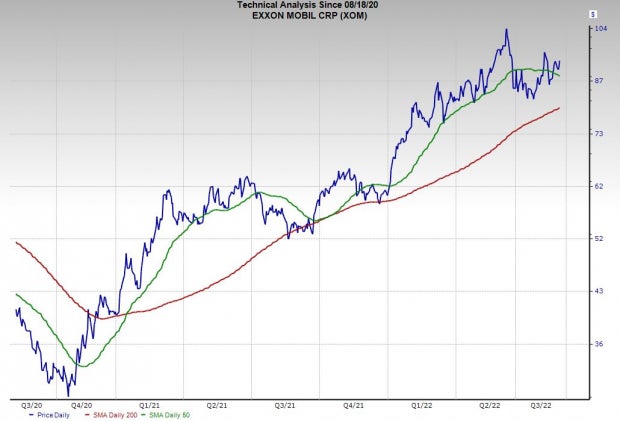 Exxon is the largest U.S. oil company with a market cap approaching $400 billion. XOM reported strong growth in 2021 and historic strength in first-half of 2022, driven by soaring oil and energy prices that saw crude climb to $120 a barrel at one point.

Exxon posted record quarterly profit in the second quarter, with its adjusted Q2 earnings up 276% to $4.14 per share, driven by record refining margins.

XOM’s FY22 and fiscal 2023 consensus earnings estimates extended their march higher following its impressive results on July 29. The company’s FY22 EPS estimate is now up 21% over the past 60 days, with FY23 over 13% higher. XOM’s bottom-line positivity helps it land a Zacks Rank #1 (Strong Buy) at the moment.

At the moment, Exxon’s sales and earnings are projected to pull back off these levels in 2023. But the expected YoY dip hardly signals a huge economic slowdown.

Exxon’s Oil and Gas -Integrated–International industry sits in the top 12% of over 250 Zacks industries. Exxon’s stellar 2021 helped it repay about $20 billion in debt, or most of the total debt it borrowed during the pandemic downturn.

The company’s ratio of net debt to capital dropped to 13%, which should help it thrive even as oil hovers around $90 a barrel.

The reduced debt load and high margins are also helping the firm return tons of value to shareholders. XOM said earlier this year it would triple its share repurchases, while slightly increasing its oil-field spending and production.

XOM did drop rather significantly off its early June highs of $105 per share to around $83 in the middle of July. Exxon has bounced back to around $94 a share, which still offers 8% upside vs. its current Zacks consensus price target. And the stock has found strong support at some key technical levels over the last year.

Despite its climb, Exxon is trading at a 40% discount to its year-long highs at 8.3X forward 12-month earnings. This also marks a 25% discount to its year-long median and right near its lows not only over the past 12 months but over the last 10 years. The nearby chart showcases its strong valuation, with the covid demand evaporation creating that strange vertical section in 2020.