Recession Fears and the Earnings Outlook

The Fed has been in tightening mode for a while now, but the unequivocally tough message since Jackson Hole took concrete shape after the recent FOMC meeting. Everyone in the markets appears to have finally ‘received the memo,’ with those looking for the central bank to pivot, finally accepting the inevitable, at least for now.

The pain that the Fed Chair warned us of in Jackson Hole was already a reality of life for key parts of the economy like housing, cryptos, SPACs, the M&A/IPO markets and much more. The bitter medicine that the Fed is determined to administer will spread the pain all around, further diminishing the odds of the so-called ‘soft landing.’

One anguished analyst from one of the money-center banks described the outlook for the U.S. economy in the wake of the recent Fed meeting as having one foot in the grave and the other on a banana peel.

I don’t think the economic outlook is really that dire, given the multi-decade low unemployment rate, rock-solid household and corporate balance sheets and a well-capitalized financial system. I am not suggesting that these sources of strength will stop the U.S. economy from falling into an economic downturn, but rather that these foundational strengths will help it navigate these headwinds better.

Most recessions are caused by the Fed, with the primary culprit being the central bank’s inability to accurately gauge, in real-time, the extent of tightening needed to curtail aggregate demand in the economy. The Fed’s tougher posture increases the odds of that history repeating itself.

That said, if we do get into a recession, it will most likely be of the garden variety type, and not what we experienced in the global financial crisis. Driving this somewhat sanguine view of the economy are the aforementioned foundational strengths.

For context, keep in mind that when I was in graduate business school in the late 1990s, economic texts defined ‘full employment’ in the 4% to 5% unemployment rate range, significantly higher than the ‘pain’ implied by the recent September FOMC dot plot.

All of this has direct earnings implications, as estimates for the coming periods get trimmed.

To get a sense of what is currently expected, take a look at the chart below that shows current earnings and revenue growth expectations for the S&P 500 index for 2022 Q3 and the following three quarters. 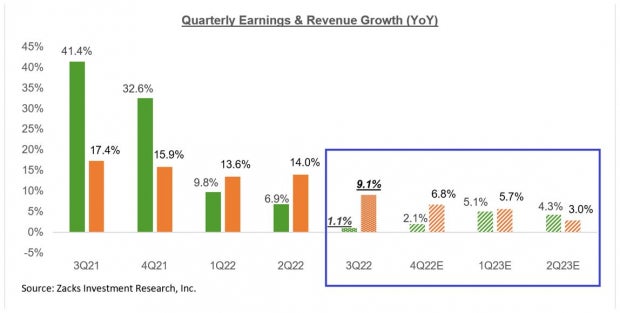 Analysts have been lowering their estimates since the quarter got underway, as the chart below shows. 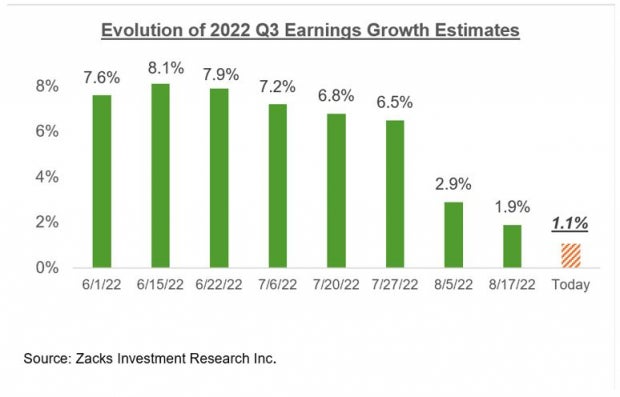 Q3 estimates have come down for all sectors, except Energy and Autos, with the biggest declines in Consumer Discretionary, Basic Materials, Consumer Staples, Technology, and Construction.

In the aggregate, 2022 Q3 earnings estimates for the S&P 500 index have been cut by -6.3% since mid-June. If we look at the revisions trend excluding the Energy sector where estimates are still going up, aggregate Q3 estimates have declined by -8.4% since mid-June.

These aren’t modest cuts to estimates, but rather towards the higher end of the historical range. Keep this in mind as you hear or read analysts warning us about the coming estimate cuts.

The key takeaway here is that estimates have already been coming down. Yes, there may be some more cuts ahead, but to suggest that earnings estimates have to massively come down to reach a ‘fair’ level implies that we are projecting a global financial crisis type of economic event on the horizon. I don’t think we are headed in that direction for the reasons I stated earlier.

As such, I strongly believe that the bulk of the negative estimate revisions is likely behind us. We are closer to the end than the beginning. 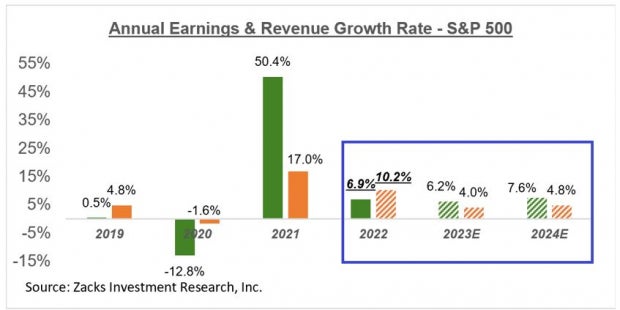 The +6.9% earnings growth expected for the index this year drops to +0.4% once the Energy sector’s contribution is excluded.

The chart below shows how the aggregate bottom-up earnings total for 2023 on an ex-Energy basis has evolved lately. 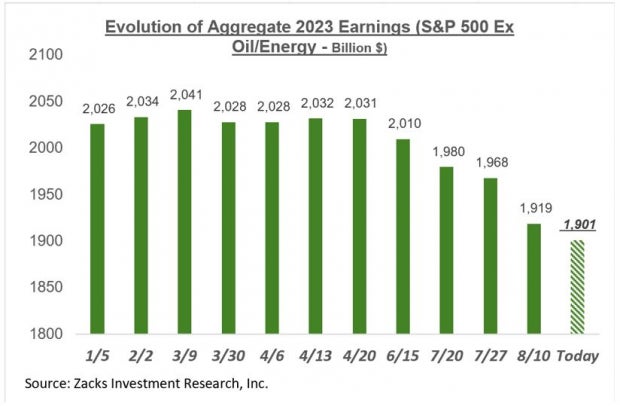 All of these early reports are from companies with fiscal quarters ending in August, which we count as part of our Q3 tally. We have another 5 S&P 500 members on deck to report results this week, including Micron (MU - Free Report) and Nike (NKE - Free Report) .

Total Q3 earnings for these 10 index members that have reported already are up +3.1% from the same period last year on +13.5% higher revenues, with 60% beating EPS estimates and 50% beating revenue estimates.

The comparison charts below put the results from these 10 index members in a historical context.

The first set of comparison charts show how the Q3 earnings and revenue growth pace stack up relative to what we had seen from the same group of 10 companies in other recent periods.

The charts below compare the EPS and revenue beats percentage for these 10 index members relative to what we had seen from this same group of companies in other recent periods.

It has been a rough going for the 10 index members that have reported already, as we saw with the Adobe report and the FedEx pre-announcement. But as bad as these reports were, there were also reassuring reports from the likes of Costco and General Mills. In other words, it’s too early to tell how the Q3 earnings season will unfold, but we are undoubtedly off to a rough start.

For a detailed look at the overall earnings picture, including expectations for the coming periods, please check out our weekly Earnings Trends report >>>>How Earnings Estimates Are Evolving Amid Inflation & Higher Rates