KB Home (KBH - Free Report) is facing the highest mortgage rates in 20 years. As a result, this Zacks Rank #5 (Strong Sell) is expected to see falling earnings next year.

KB Home is one of the nation's largest homebuilders. It builds in 47 markets from coast to coast.

A Beat in the Third Quarter

It was the second earnings beat in a row.

It was also a record third quarter, with year-over-year growth in revenue, margins and diluted earnings per share. Total revenue rose 26% to $1.84 billion.

Then what is going wrong for it to be a Zacks Rank #5 (Strong Sell)?

“The long-term outlook for the housing market remains favorable. However, the combination of rising mortgage interest rates, ongoing inflation and other macro concerns has caused many prospective buyers to pause on their homebuying decision," said Jeffrey Mezger, CEO.

The analysts are pessimistic as rates continue to rise and sales slow.

4 estimates were lowered for 2022 in the week since the company reported earnings, pushing the Zacks Consensus down to $9.73 from $10.19.

That's still earnings growth of 60.8%, however, as KB Home made $6.05 last year. It will still deliver its big backlog.

Shares of KB Home have sunk this year as mortgage rates have risen and are down 39.7% year-to-date. 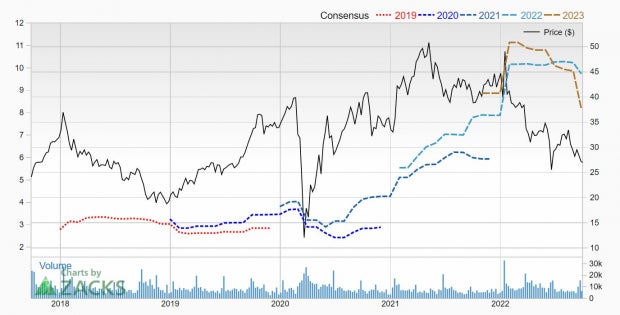 But it's a stunning reversal in the shares given that it's still reporting record quarters thanks to pandemic demand.

Even with the estimates being cut, KB Home shares are dirt cheap. It's trading with a forward P/E of just 2.6. That's among the lowest P/Es I've seen on a homebuilder this cycle.

However, investors who are interested in the homebuilders might want to wait on the sidelines for stabilization in mortgage rates and the economy. It looks like a challenging few months ahead for the homebuilders.