Papa John’s and other companies benefited from the stay-at-home covid boost over the last few years, as well as a willingness from consumers to eat out during a period of economic growth and positivity.

PZZA’s earnings revisions have been trending in the wrong direction lately amid a shifting economic and consumer spending landscape. Papa John’s executive team last quarter pointed to higher labor costs and commodity prices as a reason for its subdued outlook, alongside lower international sales, specifically “softening economic conditions in the UK.” 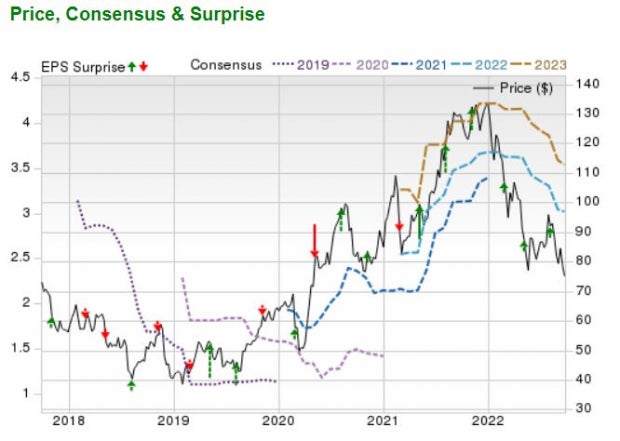 The pizza maker’s FY22 and FY23 consensus estimates have dropped 6% and 7.5%, respectively over the last 60 days and slightly more if we go back a bit farther. Zacks estimates call for PZZA’s 2022 revenue to climb by 2% and then pop around 5% in FY23. These estimates follow 14% revenue growth last year and 12% in FY20.

Papa John’s is projected to see its adjusted earnings slip by 15% in 2022 to $2.99 per share, before bouncing back to just under its FY21 total next year. The company’s overall downward earnings estimate revisions help it land a Zacks Rank #5 (Strong Sell) at the moment.

Papa John’s shares have fallen over 40% in 2022 even as its broader industry dropped just 14%. PZZA’s 2022 tumble roughly matches its rival Domino’s, with Papa John’s now down 9% over the last two years and DPZ 22% lower.

Wall Street appears worried about the possibility of pizza delivery fatigue and the sustained challenges from many other restaurants who have found success through food delivery apps such as Uber Eats (UBER - Free Report) . All told, investors might want to stay away from Papa John’s stock right now amid slowing consumer spending, high inflation, and growing non-pizza competition in the at-home delivery industry.

Bear of the Day: FedEx (FDX)