Align Technology, Inc. (ALGN - Free Report) is the company behind Invisalign. Align grew its revenue at an impressive rate over the last 10-plus years, and the firm's clear aligners have permanently reshaped the orthodontics industry.

Align now faces tough-to-compete against periods and a rapid slowdown in consumer spending. The company fell short of Q3 estimates in late October and its earnings outlook is fading alongside its stock price.

Align’s advanced clear aligner system has shaken up the orthodontics space over the last 20-plus years, as people look for viable alternatives to traditional metal braces. Align works hand-in-hand with dentists and orthodontists who help customers through the entire process from start to finish. ALGN’s success has inspired competitors to enter the market, including SmileDirectClub (SDC - Free Report) .

Align has helped doctors treat roughly 14 million patients with its Invisalign system, and it has expanded its reach to include wider digital services. On top of that, ALGN has slowly found success with younger customers who might have otherwise used traditional metal braces. 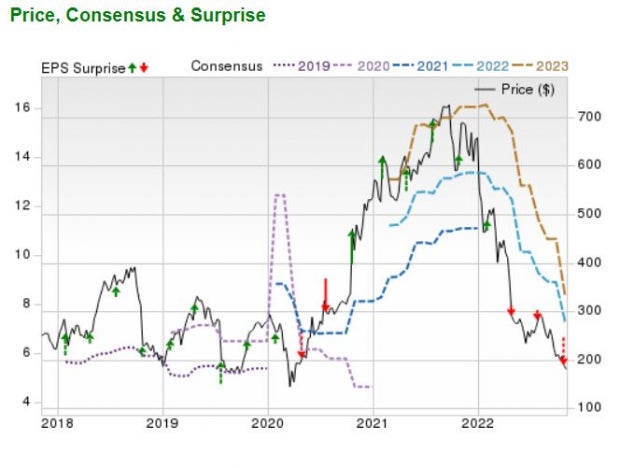 ALGN posted 60% revenue growth in 2021 and it averaged 25% sales growth during the five-year stretch between FY16 and FY20. Align now faces very difficult to compete against periods of growth, including the covid rebound surge that saw customers spend big on everything from homes to straightening their teeth.

Align missed our Zacks EPS estimates by 38% on October 26, as its revenue fell 12% YoY. Inflation, rising interest rates, currency headwinds, and other broad-based economic factors are tugging at ALGN’s expansion and margins. These factors are also making consumers far less willing to shell out money to straighten their teeth during these times of economic uncertainty.

Align’s FY22 revenue is projected to fall roughly 5% YoY to $3.77 billion, based on Zacks estimates. The company’s adjusted earnings are expected to tumble 35% to $7.32 per share. ALGN’s consensus earnings estimates tumbled once again following its Q3 report to help it land a Zacks Rank #5 (Strong Sell) right now.

The company’s Medical - Dental Supplies industry is in the bottom 17% of over 250 Zacks industries right now and ALGN lands an overall “D” VGM grade. Align stock, like many others, soared too high too fast during the post-lockdown surge. ALGN is now down around 75% from its 2021 peaks and closed regular trading Friday at $180.93 a share.

Some investors might want to keep Align on their watchlists with it now trading at 26.2X forward earnings. This nearly matches the Medical Products space that it had previously traded at a huge premium to and comes in below its decade-long median.

Still, Align shares have been prone to wild up-and-down moves even before Covid-19. Overall, investors might want to stay away from the stock for now given the ongoing economic uncertainty.