Bear of the Day: PulteGroup (PHM)

PulteGroup is the nation's third largest homebuilder. It operates in 24 states and in over 40 major markets. It's brands include Centex, Pulte, Del Webb, DiVosta, John Wieland Homes and Neighborhoods, and American West.

It's sales consist of 32% first-time buyers, 43% to move up and 25% active adult. It's Del Webb and DiVosta brands are there to serve the baby boomers as they head towards retirement.

An Earnings Miss in the Third Quarter

This was only the second earnings miss in the last 5 years, with the other one in 2021.

Given the changing market conditions due to rising mortgage rates, PulteGroup elected to terminate a number of pending land transactions and wrote off $24 million of deposits and preacquisition expenses associated with the deals.

Analysts Cutting Earnings Estimates for 2022 and 2023

PulteGroup's headline report looks solid because they are still delivering out of their big backlog from before rates rose.

But analysts have been cutting estimates over the last 30 days.

PulteGroup shares are down 20.3% year-to-date which is worse than the S&P 500, which has fallen 15.8%. But with mortgage rates jumping over 7%, it's not surprising that investors have jumped out of the homebuilder stocks this year. 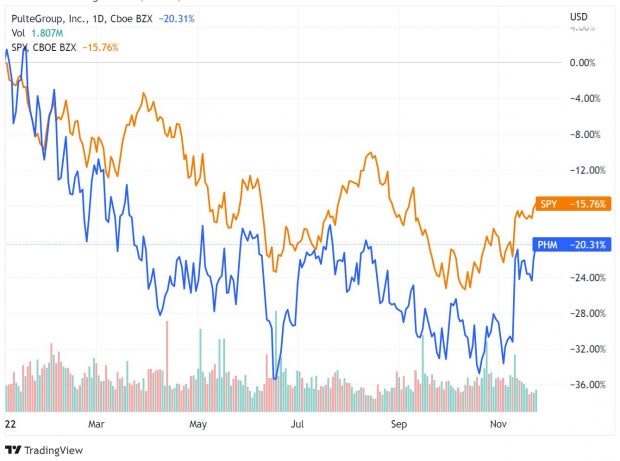 Shares are dirt cheap. PulteGroup has a forward P/E of just 4.3. But with those earnings expected to decline sharply next year, that makes it a value trap.

PulteGroup does pay a dividend, which currently yields 1.4%. It also has a share repurchase program. In the third quarter, it repurchased 4.4 million shares, or 2% of its common shares, for $180 million.

With mortgage rates remaining elevated, and a possible recession looming, it may be too early to dive back into the homebuilders. Watch the earnings estimates for a turnaround.

Bear of the Day: Upstart (UPST)