Adidas AG (ADDYY - Free Report) is a global designer, developer, and marketer of athletic and sports lifestyle products. The company offers footwear, apparel, and accessories under the Adidas brand. ADDYY sells its products through approximately 2,200 retail stores; mono-branded franchise stores; and wholesale and e-commerce channels. Adidas was founded in 1920 and is based out of Germany.

The sportswear company has recently been in the news after breaking ties with celebrity Kanye West. Adidas has launched an investigation into allegedly inappropriate behavior by Kanye while the company was working with the musician to develop and sell the Yeezy sneaker line. The end of the partnership has left Adidas facing a large revenue shortfall as well as internal complaints about the celebrity’s behavior.

Adidas has been severely underperforming the market over the past year. A Zacks Rank #5 (Strong Sell) stock, ADDYY experienced a climax top in August of last year and has been in a price downtrend ever since. The stock has hit a series of 52-week lows throughout most of this year and represents a compelling short opportunity given a temporary move higher amid general market strength.

ADDYY is a component of the Zacks Shoes and Retail Apparel industry group, which currently ranks in the bottom 8% out of approximately 250 industries. Because this industry is ranked in the bottom half of all Zacks Ranked Industries, we expect it to underperform the market over the next 3 to 6 months. Note how this group has underperformed the market at nearly every turn this year: 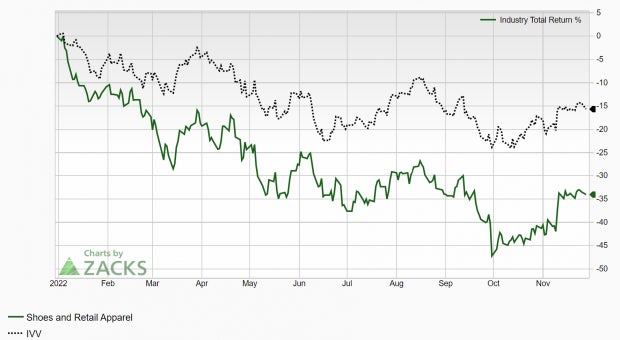 Candidates in the bottom half of industry groups can often represent solid potential short candidates. While individual stocks have the ability to outperform even when included in poor-performing industries, their industry association serves as a headwind for any potential rallies.

Despite the stock’s poor performance this year, ADDYY is still relatively overvalued, irrespective of the valuation metric used:

ADDYY fell well short of earnings estimates in the previous quarter. The footwear giant reported Q3 EPS earlier this month of $0.17/share, missing the $0.47 consensus estimate by -63.83%. A wide miss of this nature is troubling and speaks to uncertainty regarding the upcoming quarters. Last year, Adidas reported earnings in the third quarter of $1.38/share on revenues of $6.78 billion. This is the type alarming, negative trend that the bears like to see.

Analysts have been slashing earnings estimates downward as of late. For the current quarter, estimates have been reduced -785.71% over the past 60 days. The Q4 Zacks Consensus EPS Estimate now stands at a loss of -$1.44/share, translating to a -523.53% earnings regression relative to the same quarter last year. Sales are expected to fall -1.61% to $5.78 billion. 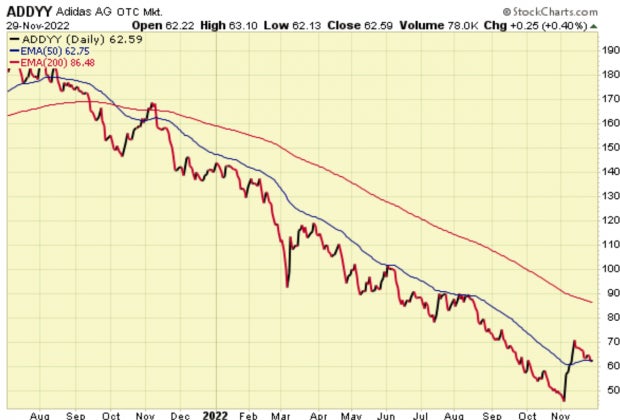 While not the most accurate indicator, ADDYY has also experienced what is known as a ‘death cross’, wherein the stock’s 50-day moving average crosses below its 200-day moving average. ADDYY would have to make a serious move to the upside and show increasing earnings estimate revisions to warrant taking any long positions in the stock. The stock has fallen more than 55% this year alone.

A deteriorating fundamental and technical backdrop show that this stock is not set to print new highs anytime soon. The fact that ADDYY is included in one of the worst-performing industry groups provides yet another headwind to a long list of concerns. The recent earnings miss along with falling future earnings estimates will likely serve as a ceiling to any potential rallies, nurturing the stock’s downtrend.

Our Zacks Style Scores depict a weakening outlook for this stock, as ADDYY is rated a second-worst ‘D’ in our Value category and ‘C’ for our overall VGM score. Potential investors may want to give this stock the cold shoulder, or perhaps include it as part of a short or hedge strategy. Bulls will want to steer clear of an overvalued ADDYY until the situation shows major signs of improvement.