The overall picture that emerged out of the Q3 earnings season is one of stability and resilience, even as the negative revisions trend accelerated.

We are not suggesting that corporate earnings are great, but they aren’t bad either. Many in the market feared an earnings cliff that would force management teams across many industries to provide downbeat guidance. Target (TGT - Free Report) was one such operator with disappointing results. Many others were in the Walmart (WMT - Free Report) camp and posted impressive results.

Not much growth was expected given where we are in the economic cycle. But the actual growth coming through the results was ever so slightly better than expected. It is this performance relative to expectations rather than the absolute level of earnings or the growth pace that is of relevance to the market.

Looking at expectations for 2022 Q4 and beyond, they are getting reset lower, as we have been pointing out for a while now. Analysts have been steadily cutting their estimates for some time. We saw this in the run up to the start of the Q3 earnings season and the trend continues with respect to estimates for the current period (2022 Q4) and full-year 2023.

The charts below show how earnings growth expectations for 2022 Q4, as a whole and on an ex-Energy basis, have evolved in recent weeks.

The chart below shows how the expected aggregate total earnings for full-year 2023 have evolved on an ex-Energy basis. 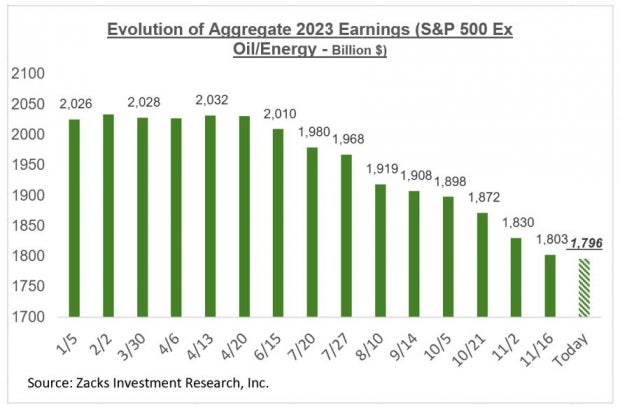 As we have consistently been pointing out, aggregate S&P 500 earnings outside of the Energy sector peaked in mid-April and have been steadily trending down ever since.

The chart below that provides a big-picture view of earnings on a quarterly basis. The growth rate for Q3 is on a blended basis, where the actual reports that have come out are combined with estimates for the still-to-come companies. 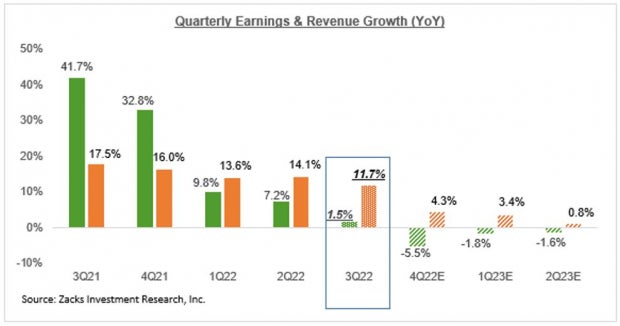 The chart below shows the overall earnings picture on an annual basis, with the growth momentum expected to continue. 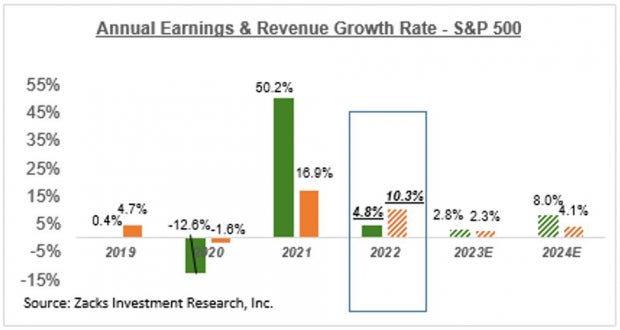 As you can see above, earnings next year are expected to be up only +2.8%. This magnitude of growth can hardly be called out-of-sync with a flat or even modestly down economic growth outlook. Don’t forget that headline GDP growth numbers are in real or inflation-adjusted terms while S&P 500 earnings discussed here are not.

As mentioned earlier, 2023 aggregate earnings estimates on an ex-Energy basis are already down by more than -11% since mid-April. Perhaps we see a bit more downward adjustments to estimates over the coming weeks, after we have seen Q3 results. But we have nevertheless already covered some ground in taking estimates to a fair or appropriate level.

This is particularly so if whatever economic downturn lies ahead proves to be more of the garden variety rather than the last two such events. Recency bias forces us to use the last two economic downturns, which were also among the nastiest in recent history, as our reference points. But we need to be cautious against that natural tendency as the economy’s foundations at present remain unusually strong.