The past year has been tough on most Americans’ wallets. While it has slowed down recently, inflation has led to a significant decrease in purchasing power for consumers. Gasoline, housing, food, and other items of necessity have risen drastically amid the War in Ukraine and supply chain issues. Meanwhile, U.S. household debt stands at more than $16.5 trillion – the highest on record. Despite inflation leveling off to some degree, the effects still linger as most struggle. It is safe to say that in the current economic climate, most consumers are looking to avoid fine dining and instead opting for fast casual, lower cost dining.

Though the Retail-Restaurants group is ranked 153 out of the 250 industries tracked by Zacks, many of the stocks have clawed there way back from bear market lows and are drastically outperforming the S&P 500 over the past six months: 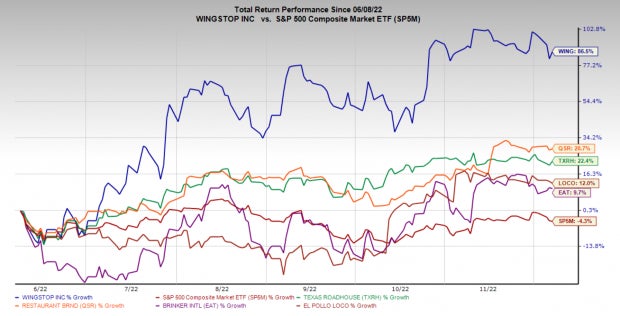 The returns in some top-performing fast-casual stocks are as follows:

As you can see, the group is firing on all cylinders. However, WING is flying above the rest. Below are five reasons why:

1.)         Chicken Prices are Falling: In 2021, chicken processors were caught flat-footed by the abrupt recovery in demand after the initial pandemic shock. Fast forward to the present day, and supply has increased as chicken suppliers have begun to catch up. As the owner and franchisee of more than 1,600 chicken wing-focused restaurants, the fall in chicken prices is a significant tailwind for the company.

3.)         Relative Strength: Relative to the S&P 500 Index and the group, WING has outperformed. Strength begets strength.

4.)         Continued Revenue Growth Expected: According to Zacks Estimates, revenue growth is slated to continue growing over the next year.

5.)         Bullish Chart Pattern: WING is forming a bull flag and getting support at its 50-day moving average.

Pictured: WING is forming a bull flag and attempting to get support at its 50-day moving average.

3 Top Stocks Already Up More Than 10% In December