Of late, the Zacks Oil and Gas - Exploration and Production - Canadian industry has been pegged back by sliding commodity prices, uncertainties related to slowing global economic growth and inflationary pressures. Despite macro challenges posing a direct impact on energy demand, we think the space still has fuel left in the tank, especially for the operators that target growth opportunities and operating efficiency initiatives. We advise investors to focus on Canadian Natural Resources (CNQ - Free Report) , Ovintiv (OVV - Free Report)   and Baytex Energy (BTEGF - Free Report) .

Tumbling Commodity Prices: With market participants concerned that the central bank’s rate-hiking campaign to fight persistently high inflation would trigger an eventual recession, oil has been caught up in a selloff even as the war between Russia and Ukraine continued to drag on. Moreover, demand has also shrunk in China — the world’s biggest consumer of crude — as the country struggles with a periodic surge in COVID cases. As a result, the price of WCS crude — the Canadian benchmark — has come down sharply in recent months. After reaching a 14-year high of over $100 per barrel in March, the commodity has now tapered off to around $60 per barrel. Natural gas realizations have taken a beating too, with abundant supply and weather woes limiting demand. The declining oil and gas prices are set to impact the fortunes of the domestic E&P players as they are now getting less for their products.

Concerns About Economic Growth: Canadian energy companies have been experiencing rising production costs in the form of increased expenses related to steel, manufactured goods, services and labor. The inflationary environment, together with supply-chain tightness, is not only pushing costs higher but also affecting their capital programs. Apart from being hard to ignore, escalation in expenses is also drowning out the benefits of any commodity price increase. In our view, the inflation-associated headwinds will continue to challenge growth and margin numbers with little chance of a quick resolution. Finally, what this means is that the central bank will be persistent with its aggressive policy of raising rates to stem inflation. This may lead to a rough road for oil/gas equities. In particular, worries about weaker energy demand due to the threat of recession (spurred by rising interest rates and slowing consumer spending) might jeopardize the commodity’s ascent.

Takeaway Constraints Plague Producers: Energy consultant IHS Markit sees oil production in Canada surging by some 900,000 barrels per day during 2020-2030. Despite this impressive output growth, the country's exploration and production sector has remained out of favor, primarily due to the scarcity of pipelines. In short, pipeline construction in Canada has failed to keep pace with rising domestic crude volumes — the heavier sour variety churned out of the oil sands — resulting in an infrastructural bottleneck. This has forced producers to give away their products in the United States — Canada’s major market — at a discounted rate. As it is, Canadian heavy crude is inferior to the higher-quality oil extracted from shale formations in the United States and is more expensive to transport and refine. Following U.S. President Joe Biden’s revocation of TC Energy’s contentious Keystone XL pipeline and the company’s subsequent termination of the project, Canadian oil sands producers will have to wait a little longer for the takeaway capacity issue to be resolved.

The Zacks Oil and Gas - Canadian E&P is a seven-stock group within the broader Zacks Oil - Energy sector. The industry currently carries a Zacks Industry Rank #224, which places it in the bottom 11% of more than 250 Zacks industries.

The group’s Zacks Industry Rank, which is basically the average of the Zacks Rank of all the member stocks, indicates challenging near-term prospects. Our research shows that the top 50% of the Zacks-ranked industries outperforms the bottom 50% by a factor of more than 2 to 1.

The industry’s position in the bottom 50% of the Zacks-ranked industries is a result of a negative earnings outlook for the constituent companies in aggregate. Looking at the aggregate earnings estimate revisions, it appears that analysts are becoming pessimistic about this group’s earnings growth potential. While the industry’s earnings estimates for 2022 have gone down 21.4% since August last year, the same for 2023 have fallen 20.5% over the same timeframe.

Despite the dim near-term prospects of the industry, we will present a few stocks that you may want to consider for your portfolio. But it’s worth taking a look at the industry’s shareholder returns and current valuation first.

The Zacks Oil and Gas - Canadian E&P has fared better than the Zacks S&P 500 composite over the past year but has underperformed the broader Zacks Oil – Energy sector over the same period.

Stocks to Watch For

Baytex Energy: An energy producer based in Western Canada, Baytex focuses on a high-quality and diversified oil portfolio across multiple plays, spanning Peace River, Duvernay, Lloydminster and Viking. The company is also active in the Eagle Ford shale. Banking on its strong execution and disciplined capital allocation, BTEGF is on track to generate substantial free cash flow in this commodity upcycle. Baytex is also relentlessly working to improve its leverage ratios and enhance shareholder returns.

Headquartered in Calgary, Alberta, BTEGF delivered an 84.6% beat in Q3. The 2022 Zacks Consensus Estimate for Baytex indicates 21.9% earnings per share growth over 2021. BTEGF, carrying a Zacks Rank #3 (Hold), has seen its stock go up 36.4% in a year. You can see the complete list of today’s Zacks #1 Rank (Strong Buy) stocks here. 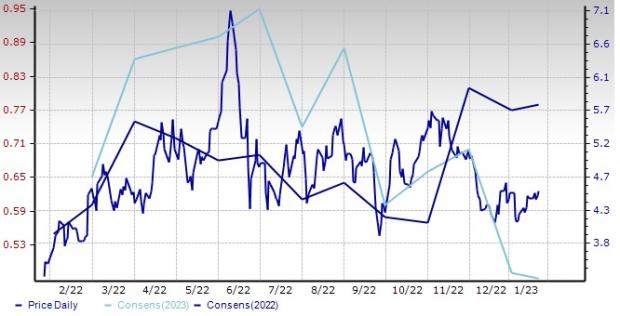 Notably, CNQ beat the Zacks Consensus Estimate for earnings in each of the last four quarters. The company has a trailing four-quarter earnings surprise of 14.5%, on average. Canadian Natural, with a Zacks Rank of 3, has seen its shares gain 22.5% in a year. 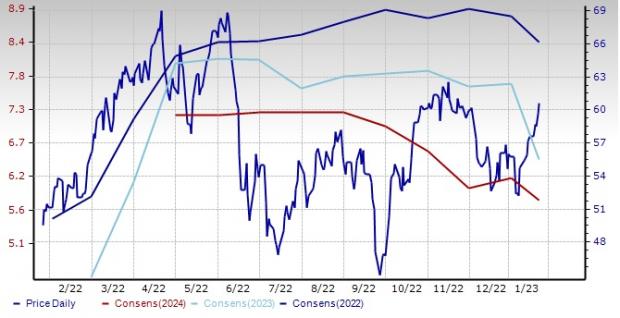 Headquartered in Denver, CO, Ovintiv has a projected earnings growth rate of 68.8% for 2022. OVV’s expected EPS growth rate for three to five years is currently 26.5%, which compares favorably with the industry's growth rate of 20%. Ovintiv, a Zacks Rank #3 stock, has seen its shares go up 33.8% in a year. 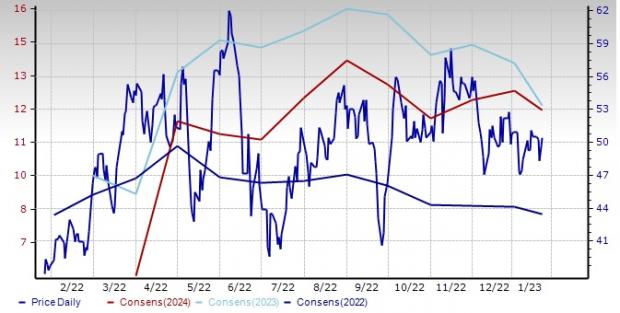