The earnings focus lately has been on the Retail sector and this week’s reporting docket keeps the spotlight firmly on the space. Wal-Mart’s strong earnings reports reconfirms that consumers are in good shape, but you wouldn’t reach that conclusion if you just looked at the stock market performance of the major department stores.

The chart below shows the one-year stock market performance of the Zacks Department Store industry relative to the S&P 500 index. 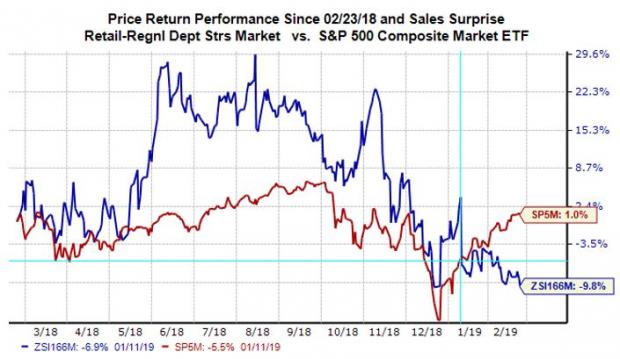 The group’s earlier momentum in 2018 wasn’t a reflection on improving underlying fundamentals, but rather a combination of over-sold conditions and easier comparisons. The fundamental back drop for the group - characterized by imbalance between falling foot traffic, excess capacity and secular shift towards digital sales - still remains challenging.

Earnings estimates for department store operators have been steadily down, as you can see in the chart below (green line represents forward 12-month EPS estimate for the group). 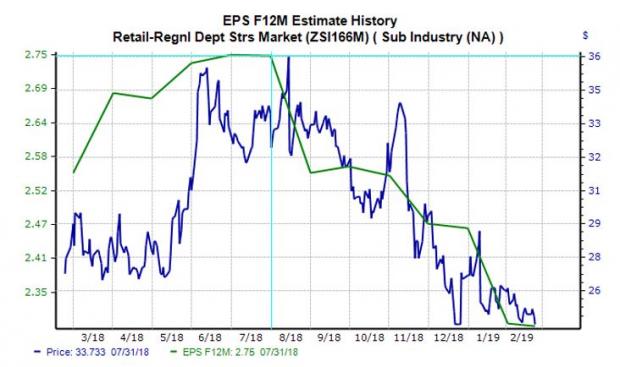 Given the group’s recent stock market performance, coupled with the steadily lowered earnings estimates, it will likely not take much for Macy’s (M - Free Report) , Nordstrom (JWN - Free Report) and others to regain some affection from the market.

We have more than 650 companies coming out with quarterly reports this week, including 39 S&P 500 members. The Retail and Utilities sectors are the only ones that have a sizable number of reports still to come and this week brings in plenty of reports from these sectors.

Monday, February 25th: Potbelly and Shake Shack are reporting after the market’s close on Monday. The government shutdown likely had a material impact on both of these operators as they have material DC footprint. In addition to the shutdown effect, trends in labor inflation, unit growth and outlook for the current period will be the key issues for both of these operators.

Tuesday, February 26th: Macy’s and Home Depot HD are notable earnings releases in the morning session, while Planet Fitness (PLNT - Free Report) and Weight Watchers WTW will be the interesting plays after the market’s close.

Macy’s and the broader department store space has been struggling lately all over again, with the stock totally sitting out the post-Christmas market rally. Macy’s shares are down -18.8% this year, lagging the Zacks Department Store industry’s -7.3% decline and +10.6% gain for the S&P 500 index since the start of the year. Given the steady negative revisions to estimates, it wouldn’t take much for the company come out with a positive surprise. The stock has been down big after each of the last two quarterly releases.

Weight Watchers shares have been struggling lately, with the stock down -22% this year and almost -60% in the past year. But with analysts still cutting their estimates, the worst may not be over for the company.

Best Buy shares have done better than the market this year, with the stock up +14.2% this year, but it has lagged the market over the past year. Estimates have been stable ahead of this release, with the electronics retailer expected to earn $2.57 per share on $14.7 billion in revenues, representing year-over-year change of +6.2% and -4.2%, respectively.

Lowe’s shares have done better than rival Home Depot this year as well as the past year, with the stock up +14.9% this year vs. +11.9% for Home Depot. Few surprises are expected from Lowe’s in this release as management had provided full-year outlook at the time of the analyst meeting back in December. But overall sentiment on Lowe’s as well as Home Depot appears have improved lately, following a very difficult second half of 2018 when macro worries about housing, mortgage rates and the economy weighed on the group.

Square shares still remain below the September 2018 high, but they have made impressive gains lately, up +35.1% this year and +69% over the past year. The company has been very successful in providing ancillary services to its customers, with continued growth in transaction-based revenues key to how the market receives this earnings release, more than actual revenue and EPS numbers. Modestly weaker growth on this count was the major reason for the market’s relative disappointment with the last quarterly release. But with the stock this up, it will be hard to satisfy expectations.

Thursday, February 28th: Gap GPS and Nordstrom will be the notable reports coming out after the market’s close on Thursday. As has been the case with Macy’s, Nordstrom and Gap shares have been under pressure as well, though both of these retailers have done better than Macy’s this year.

We now have Q4 results from 445 S&P 500 members or 89% of the index’s total membership. With another 39 index members on the docket to report results this week, we will have seen Q4 results from almost 97% of all companies.

Total earnings for these index members that have reported already are up +12.7% from the same period last year on +7.2% higher revenues, with 67.4% beating EPS estimates and 61.8% beating revenue estimates.

The table below shows the current scorecard. 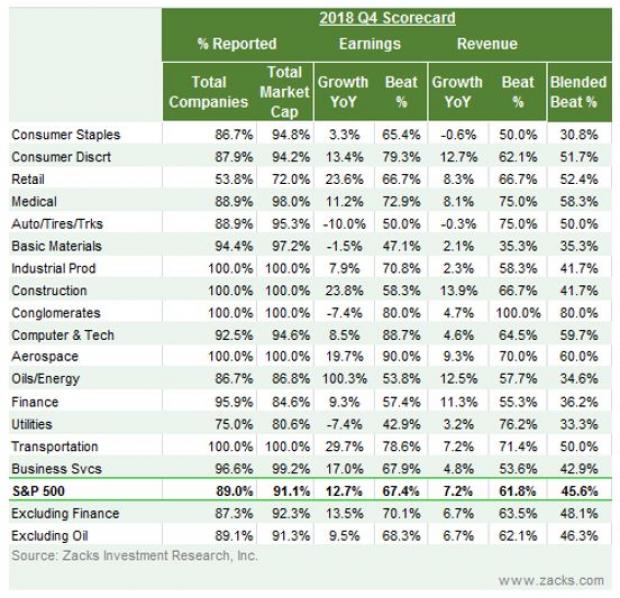 As we have been pointing since the start of this earnings season, the picture that emerged from the Q4 earnings season is not great, but it is not as bad either.

The comparison chart below puts this Q4 growth deceleration in a historical context for these index members. 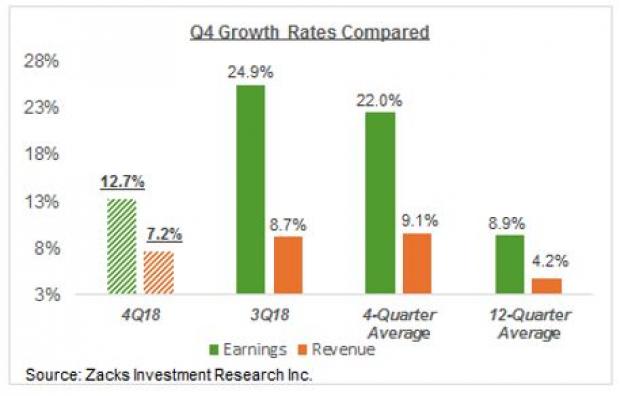 The comparison chart below puts the Q4 blended beats percentage in a historical context. 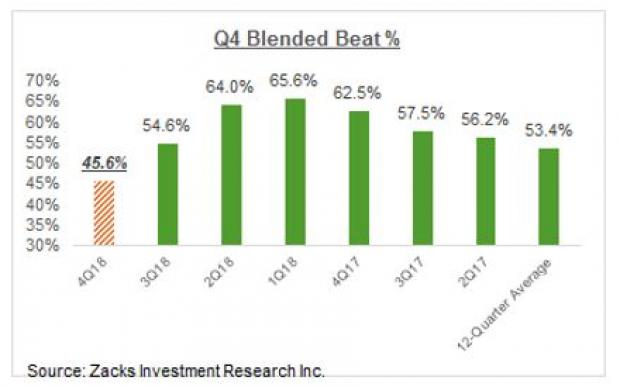 Third, estimates for 2019 Q1 and full-year 2019 are coming down in a major way, with the Q1 growth rate now in negative territory and Q2 barely positive.

The chart below shows how estimates for 2019 Q1 have evolved since late-November 2018. 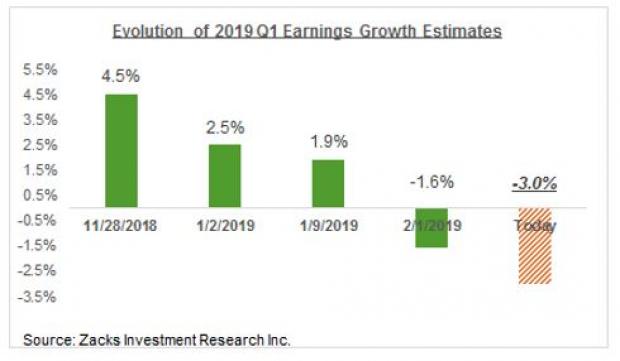 Negative revisions to 2019 Q1 estimates are along the same lines that we saw ahead of the start of the Q4 earnings season as well. Estimates for full-year 2019 have been coming down as well, as the chart below shows. 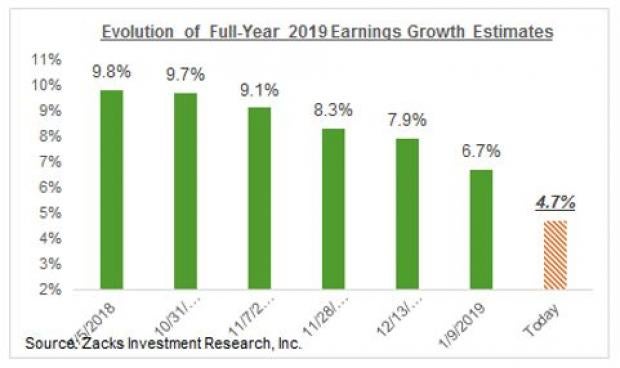 For Q4 as a whole, combining the actual results from the 445 index members that have reported with estimates for the still-to-come companies, total earnings for the S&P 500 index are expected to be up +13.5% from the same period last year on +6.8% higher revenues, which would follow the +25.7% earnings growth on +8.4% higher revenues in 2018 Q3.

The table below shows the summary picture for Q4, contrasted with what was achieved in the preceding earnings season. 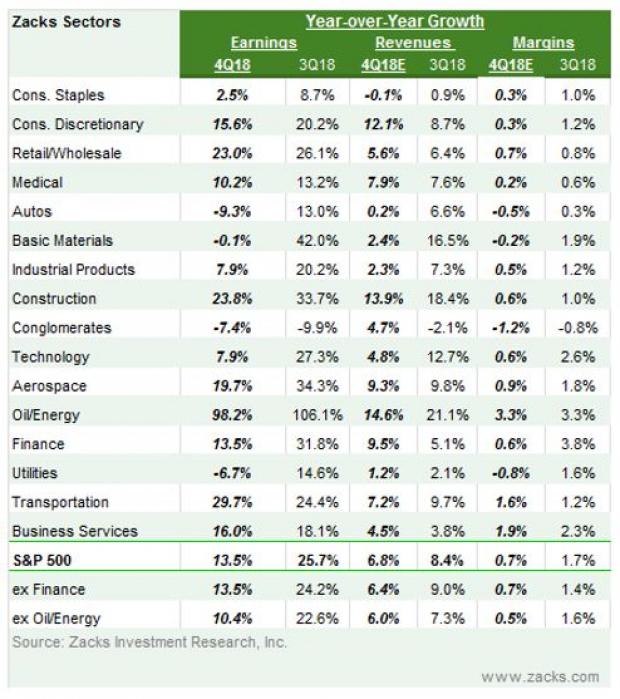 The chart below shows Q4 earnings and revenue growth expectations contrasted with what is expected in the following three quarters and actual results in the preceding 4 quarters.

As you can see in the chart below, the growth pace is expected to decelerate materially from what we saw in the first three quarters of the year. 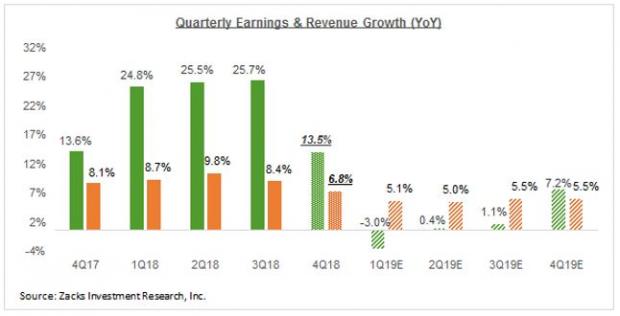 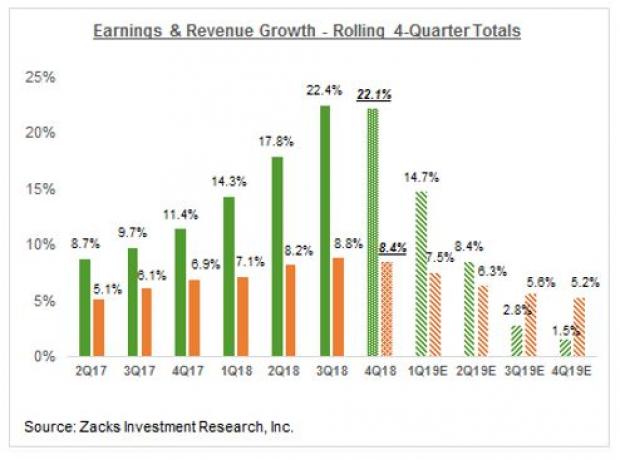