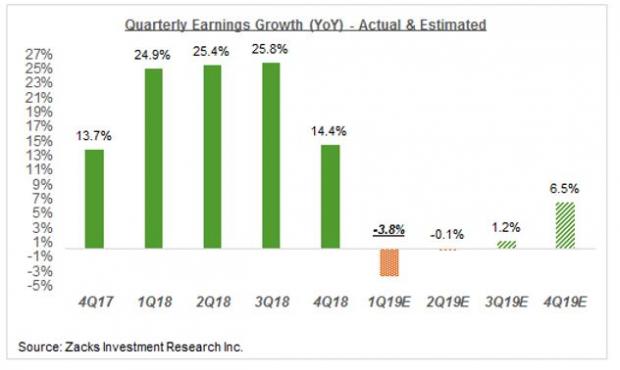 We shouldn’t take this recession talk too seriously, however. The reason is that the negative growth in the first half of the year is solely because of very tough comparisons. In other words, the base period for 2019 Q1 growth is 2018 Q1, when earnings received a huge boost from the tax-cut legislation. You can see this in the expanded version of the above chart that shows all four quarters of 2017 as well. 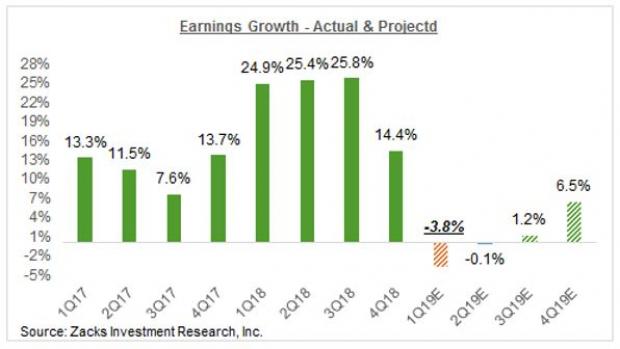 The lower corporate tax rates that showed up in earnings for the first time in 2018 Q1, the base year for 2019 Q1, boosted profitability through margin expansion. As such, we are up against some tough comparisons in 2019. 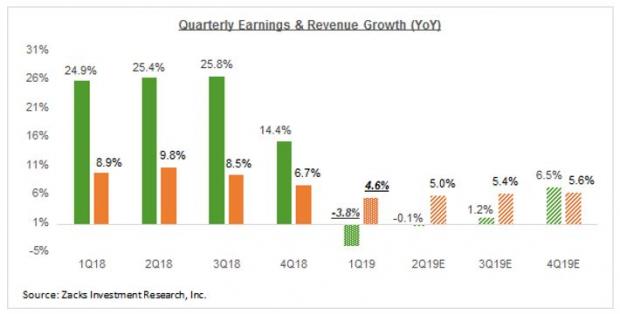 That’s not correct as there are legitimate reasons to be wary of the earnings picture. The earnings growth trajectory would be challenged and difficult even without the issue of the aforementioned tough comparisons as the global economic growth backdrop has become less favorable and cyclical rises in transportation, logistics, payroll and other expenses are squeezing margins. As a result, analysts steadily lowered their estimates for 2019 Q1 as well as full-year 2019, as you can see in the chart below. 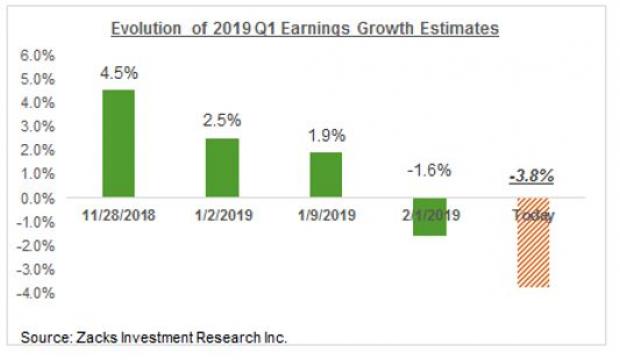 The weak guidance from Nike (NKE - Free Report) , FedEx (FDX - Free Report) , Adobe (ADBE - Free Report) , Oracle (ORCL - Free Report) and others in this reporting cycle suggests that we will likely see a replay of what we experienced the last earnings season that pushed estimates lower. We will be keeping a close eye on how estimates for 2018 Q2 evolve as companies report Q1 results and share their outlook for Q2 and beyond.

Total earnings for the S&P 500 index are expected to be down -3.8% from the same period last year on +4.6% higher revenues. If actual 2019 Q1 earnings growth turns out to be negative, it will be the first earnings decline since the second quarter of 2016.

Driving the expected Q1 earnings decline is broad-based margin pressures across all major sectors, with net margins for the index of 11% down from 12% in the year-earlier and 11.8% in the preceding quarter. The Utilities sector is the only one that is expected to have unchanged net margins in 2019 Q1 relative to the year-earlier period, with margins expected to be lower for all of the remaining 15 sectors.

Q1 earnings growth is expected to be negative for 9 of the 16 Zacks sectors, with double-digit earnings declines for 5 sectors, including Energy and Technology. For the Technology sector, Q1 earnings are expected to be down -10% from the same period last year on +3% higher revenues and 270 basis points compression in net margins.

For the Finance sector whose members will be in the first round of Q1 releases, total earnings are expected to be up only +0.8% on +6.5% higher revenues. 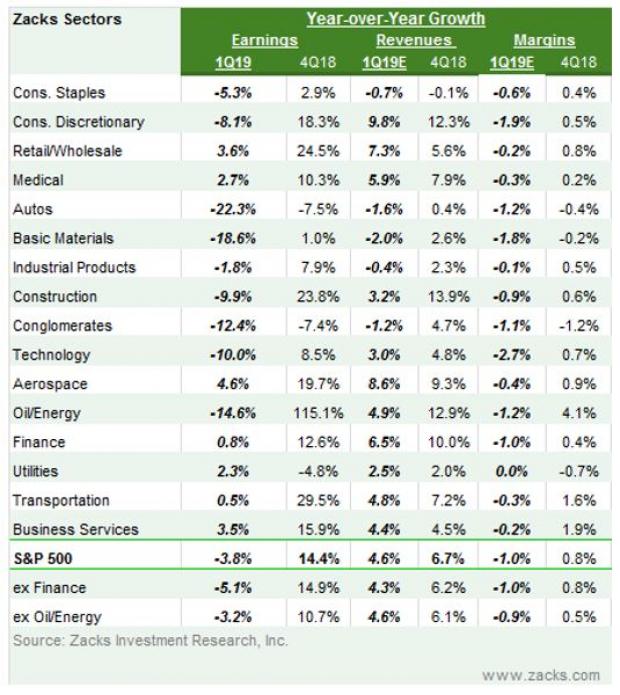 The market will start paying attention to the start of the earnings season following the quarterly reports from JPMorgan (JPM - Free Report) and Wells Fargo (WFC - Free Report) on April 12th. But these bank earnings reports will not be the first of the Q1 earnings season, as the reporting cycle has actually gotten underway already, with results from 20 S&P 500 members out. All of these early reports, which includes a few bellwethers like FedEx (FDX - Free Report) , Nike and others, have fiscal quarters ending in February, which we count as part of our March-quarter tally.

For the 20 S&P 500 members that have reported Q1 results already, total earnings are down -11% from the same period last year on +4.2% higher revenues, with 75% beating EPS estimates and 50% beating revenue estimates.

The Q1 growth for these 20 index is tracking notably below what we had seen in the recent past and positive revenue surprises appear also to be on the weak side, as the comparison charts below show.

It is premature to draw any firm conclusions from this admittedly small sample of Q1 results, but it is nevertheless a weak start to the reporting season.

For an in-depth look at the overall earnings picture and expectations for Q1, please check out our weekly Earnings Trends report >>>> Margin Pressures Weigh on Earnings Growth