What to Expect from Bank Earnings?

Bank stocks have done reasonably well lately, contrary to general perception of the group as a laggard and victim of the dovish Fed outlook. The chart below shows the year-to-date stock market performance of the Zacks Major Banks industry relative to the S&P 500 index and the Zacks Finance sector. 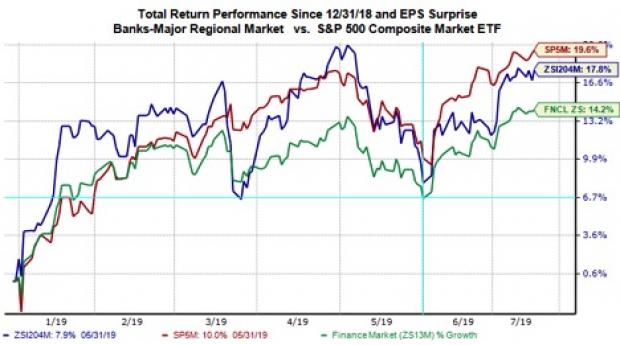 The blue line in the chart represents the Zacks Major Banks industry, which includes Citigroup (C - Free Report) that reports on Monday July 15th and JPMorgan (JPM - Free Report) and Wells Fargo (WFC - Free Report) that report on Tuesday July 16th. The recent most catalyst for the group turned out to be the late-June completion of the Fed’s ‘stress test’ (officially called Comprehensive Capital Analysis and Review or CCAR) that allowed these players to return ever increasing amounts to shareholders through cash dividends and buybacks.

The Dodd-Frank legislation in the wake of the 2008 crisis made banks better capitalized and more stringently regulated. The goal was to make this important part of the economy safer and less prone to riskier behavior. Banks have become boring as a result, almost like utilities, with many of the major industry players promising juicy dividend yields (JPMorgan currently yields 3.2%).

The group’s earnings performance has been good; not great, but good. On most key operating metrics, bank performance was been very strong in recent quarters and we will most likely see a repeat performance this earnings season as well.

Key parts of the market’s worry list for banks include the interest rate backdrop and its related implications for the broader economy. With the current U.S. economic expansion on the verge of becoming the longest in history, many in the market justifiably worry about the duration and stability of the economy’s growth trajectory.

Keep in mind that banks are cyclical businesses engaged in lending and other activities like investment banking, money management, and trading that are always at the mercy of the economic cycle. Banks not only experience low demand for its services when the economic cycle turns down, but the quality of its existing assets (its loan portfolio) also goes down as its customers’ credit profiles weaken.

The Fed’s recent dovish tilt is aimed at forestalling worries about trade and global growth from bleeding into business and market sentiment. The momentum in stock and other asset prices suggests that it is working, even though it is prompting cuts to earnings estimates for  banks.

Total Q2 earnings for the Zacks Major Banks industry that includes Citi, JPMorgan, Wells Fargo and other major industry players are expected to be down -5.4% from the same period last year on +0.2% higher revenues. This would follow the +2% earnings growth on +0.8% higher revenues for the group in Q1.

The table below shows Q2 expectations for the constituent industries of the Finance sector, contrasted with what was reported in Q1 and what is expected for Q3. Please note that the Major Banks industry represents the biggest slice of the Finance sector, accounting for almost 45% of the sector’s total earnings.

The decline is primarily a function of tough comparisons, with the year-earlier tally reflecting one-time boost from the tax cut legislation.

The chart below puts the Finance sector’s Q2 earnings and revenue growth expectations in the context of where growth has been and where it is expected in the coming periods. 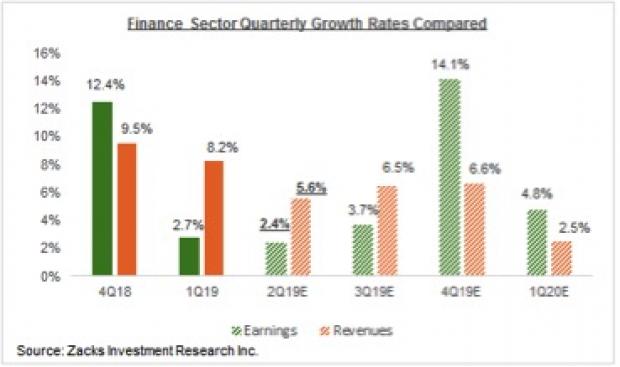 The Q2 earnings season really gets going with Monday’s Citigroup report, but the reporting cycle has actually gotten underway already with results from 24 S&P 500 members. All of these earlier results are from companies for their fiscal quarters ending in May, but those reports get counted as part of the Q2 tally.

As you can see in the chart below of weekly reporting schedule for S&P 500 companies, the Q2 reporting cycle front-end loaded, with the bulk of the repots coming out in the next three weeks.

The table below shows the notable companies reporting results each day this week.

The chart below shows Q2 earnings and revenue expectations in the context of where growth has been in recent quarters and what is expected in the next few periods. 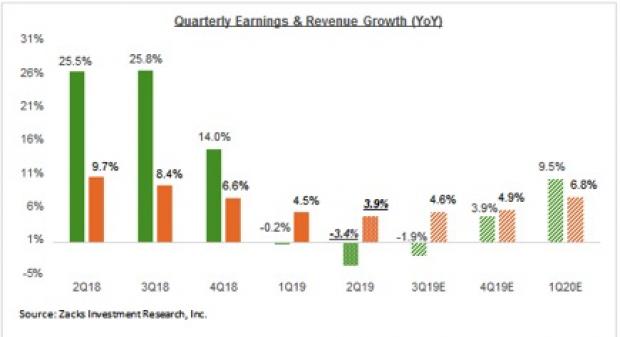 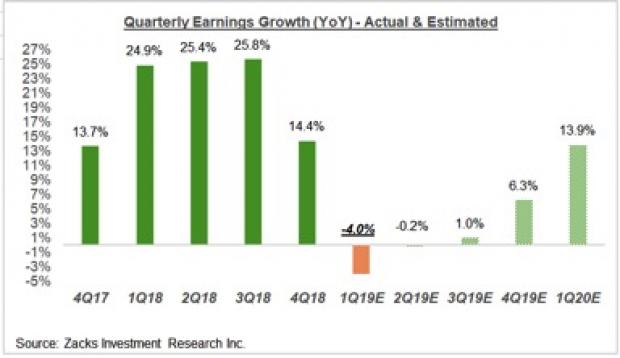 We shouldn’t take this recession talk too seriously, however. The reason is that the negative growth in the first half of the year is solely because of very tough comparisons. In other words, the base period for 2019 Q1 growth is 2018 Q1, when earnings received a huge boost from the tax-cut legislation. The lower corporate tax rates that showed up in earnings for the first time in 2018 Q1, the base year for 2019 Q1, boosted profitability through margin expansion. As such, we are up against some tough comparisons in 2019.

It is hard to look for aggregate trends from this small sample of reports. But growth is unsurprisingly on the weak side, but positive EPS surprises appear to be tracking higher at this stage.

For an in-depth look at the overall earnings picture and expectations for Q2 and beyond, please check out our weekly Earnings Trends report from July 10th.