iRobot (IRBT - Free Report) shares are down significantly in 2019 and have plummeted roughly 19% since it reported its second-quarter financial metrics on Tuesday, July 23. The downturn came despite the fact that the household robot maker posted better-than-expected earnings results. So, it’s time to see why iRobot is Wednesday’s Bear of the Day.

The Bedford, Massachusetts-based company posted earnings of $0.25 a share. This crushed our $0.03 a share Zacks Consensus Estimate, but it did mark a significant downturn from the year-ago period’s EPS of $0.37. Meanwhile, iRobot’s sales climbed roughly 15% to $260.2 million, which fell just short of our projection.

The reason for iRobot’s decline stems from the firm’s exposure to the U.S. and China trade war. Last quarter, the robotic vacuum maker said that it would slowly move production of some of its “more easy to build products” outside of China to help fight tariffs worries. Executives claimed that the efforts would help iRobot create better long-term supply chain flexibility.

But Wall Street doesn’t seem satisfied yet. And this disappointment comes with good reason, since the firm lowered its 2019 guidance on the back of trade-related setbacks. “Although we achieved our U.S. revenue target in the second quarter, we believe that the direct and indirect impacts of the ongoing U.S.-China trade war and the recently implemented 25% tariffs are likely to constrain U.S. market segment growth in the second half of the year below our expectations at the start of 2019,” the company wrote in prepared remarks last week.

We will get into iRobot’s updated guidance and our estimates, which are far worse. But it’s worth reviewing IRBT’s price movement over the last serval years to help better understand what’s going on.

Investors can see that shares of iRobot have been on a roller coaster ride over the past 24 months and are now down 6% in the last 52-weeks. This lags its industry’s roughly 3% climb over the last year and the S&P 500’s 6% expansion. 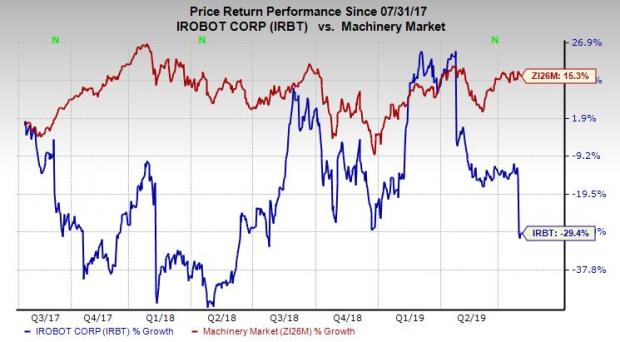 It is worth noting that iRobot’s full-year 2019 revenues are expected to climb 11.6% to hit $1.22 billion, with fiscal 2020’s sales figure projected to jump 13.5% higher than our current-year estimate.

However, we can also see just how far the household robot firm’s earnings estimates have fallen in the last seven days.

iRobot’s recent negative earnings estimate revision activity has dropped IRBT to a Zacks Rank #5 (Strong Sell). Coupled with its low rank, iRobot currently holds “D” grades for Value and Momentum, along with an “F” for Growth in our Style Scores system.

The company’s long-term business model likely remains strong despite the current setbacks as the household robotics market is still largely untapped. And the firm’s Roomba vacuums and Braava mops will soon be joined by iRobot’s Terra robot lawn mower. Nonetheless, the firm’s near-term outlook appears rough, which means it might be best just to keep an eye on iRobot for now.