Read MoreHide Full Article
I last wrote of GW Pharmaceuticals as the Bull of the Day in late July before their Q2 earnings report last week. Now that those numbers have "wowed the crowd," it's definitely time to update one of the most exciting growth stories in medicine right now.
Also since that report, which describes the company's 20-year history of cannabis-derived medicine R&D, I bought the stock for my TAZR Trader portfolio. Here was the trade alert I gave my members on August 1...
Portfolio is buying GW Pharmaceuticals between $155 and $160 with an X% allocation. ***See both my Fundamental and Technical notes below first.***
Fundamental View: I told you I had this one on my radar and I think now is the time to start a position ahead of earnings next Tuesday. And on Monday, the Piper Jaffray analyst Danielle Brill raised her Q2 sales projections for Epidiolex from $43M to $50M based on their scripts tracking data. Average analyst price targets are now over $200 based on the blockbuster sales growth potential ($1-2 billion) of the only FDA-approved cannabis-derived drug maker, who also happens to have a 20-year track record of innovation and a burgeoning pipeline.
Technical View: In April, the stock filled the Feb earnings gap in the low $150s and that's when we bought in HCare Innovators and rode to new highs on the May earnings rally above $185. The stock has risk now to test the low $150s again so you can be patient here and let it come to you. And we've got the 200-day down at $153ish, just above the April low of $151. I think the stock drifting lower now is just sifting out weaker hands (maybe in sympathy with a crushing of the marijuana stocks) and setting up for a potential sling-shot move on earnings once the growth trajectory is confirmed.
Well, on Aug 6, GW Pharma delivered a bigger sales beat for Epidiolex, the first FDA-approved cannabis-derived drug, than even the most optimistic analysts were projecting.
GWPH crushed the sales number for the treatment of two rare forms of pediatric epilepsy with $68 million vs. consensus of $45M.
And the stock was actually up over 10% in after hours that night to nearly $170.
With a morning dip under $160 on Aug 7, I told my people it was another prime opportunity to add shares. The next day, the stock went to $175.
Here was the update I gave that night...
GW Pharma Wows 'Em Again with Epidiolex Launch Momentum
Analysts are busy raising estimates and price targets (PT) after this big sales beat. Here's a sample...
Morgan Stanley: Analyst David Lebowitz raised his 2019 Epidiolex sales estimate to $291M from $165M after GW Pharmaceuticals report sales that "easily exceeded consensus" in the drug's second full quarter on the U.S. market. The analyst, who noted that significant adoption from adult patients continues and management continues to anticipate dose to increase as physicians become more comfortable administering, raised his price target on GW Pharmaceuticals shares to $238 and keeps an Overweight rating on the stock.
Oppenheimer: Analyst Esther Rajavelu raised her price target for GW Pharmaceuticals to $239 from $234 after the company reported Epidiolex revenues higher than estimates, representing 104% sequential growth, driven by new patients, favorable reimbursement, and increasing use among adult epilepsy patient in the quarter. The analyst reiterates an Outperform rating on the shares.
Stifel Nicolaus analysts raised their price target in a nominal gesture to $228 from $227. The team led by Paul Matteis was not that surprised by the sales beat given their extensive physician survey work that I shared with you last week. Here is a summary of their call...
They reiterate their Buy rating on impressive 2Q19 Epidiolex sales of $68MM, which were ~50% better than consensus of $44MM. Looking ahead they raise their 3Q/4Q Epidiolex estimates, and remain optimistic that the launch can continue to beat expectations into the latter half of the year as they believe management's guidance is conservative.
And here's the BofA/ML note, reiterating their $218 PT... 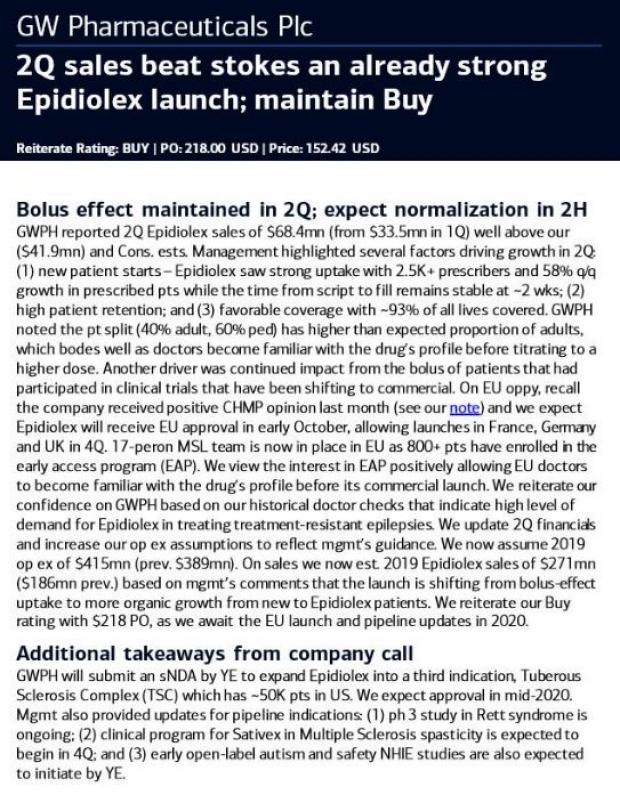 Bottom line: With a $5 billion market cap and sales quickly accelerating to over $500 million in the next year -- representing triple-digit growth -- GW Pharma and Epidiolex are on their way to blockbuster status. I don't think the stock trades for under $5 billion for very long so look for your entries during this selloff.
Disclosure: I own GWPH shares for the Zacks TAZR Trader.
Looking for Stocks with Skyrocketing Upside?
Zacks has just released a Special Report on the booming investment opportunities of legal marijuana.
Ignited by new referendums and legislation, this industry is expected to blast from an already robust $6.7 billion to $20.2 billion in 2021. Early investors stand to make a killing, but you have to be ready to act and know just where to look.
See the pot trades we're targeting>>