Traditional Retail is Far from Dead

The Macy’s report Wednesday morning served as the last straw for a market already spooked by yield-curve inversion fears and further escalation in the never-ending trade issue. Macy’s numbers were truly atrocious, with the company not only missing estimates, but also lowering guidance for the rest of the year.

The market promptly punished Macy’s for its results and saw the company’s performance as a sign of things to come from other operators in the space who are on deck to report results in the next few days. As a result, the market meted out equal-opportunity punishment to Nordstrom (JWN - Free Report) , Kohl’s (KSS - Free Report) and other retailers. This added to these stocks’ existing woes, as you can see in the year-to-date performance chart of Macy’s vs. Nordstrom vs. the S&P 500 index. 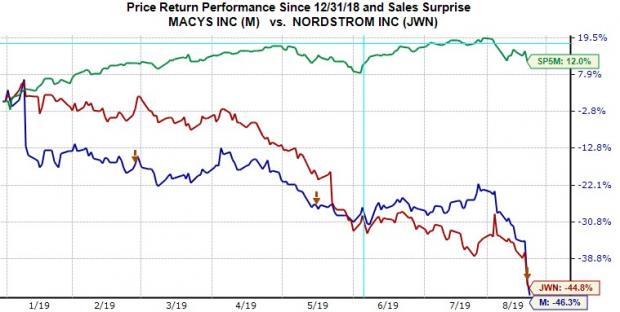 The Wal-Mart report Thursday morning didn’t contain even a whiff of the issues that Macy’s management was whining about on Wednesday. The retail giant not only handily beat estimates, but actually guided higher. The internals of the Wal-Mart report reconfirmed my long-held confidence in the company as offering the most credible challenge to Amazon (AMZN - Free Report) in the space.

So, which of these two companies are true representatives of the traditional retail space?

I strongly believe that the answer to this question has got to be Wal-Mart. We know that households are spending; we saw that in the better than expected July Retail Sales numbers that also came out Thursday morning. In fact, there is little disputing the fact that the consumer spending backdrop in the U.S. remains one of the brightest spots on the global economic scene. This may change in the future, as market bears continue telling us, citing yield-curve inversions, the trade overhang and many other issues.

But with a tight labor market pushing wages higher, even as inflation remains muted, there is simply no evidence of the longest U.S. expansion in history coming to an end. There will be a recession at some stage in the future, that’s just the reality of economics. It isn’t on the horizon presently, inversions notwithstanding.

So, what’s going on with Macy’s?

I am no expert of the retail space and have no idea how the company needs revive its fortunes. But there is no doubt in my mind that Macy’s problems are of its making. In other words, this is a company-specific problem. What this means is that it may not be fair to treat Nordstrom, Kohl’s, and others with the same brush.

The comparison charts below put these results in a historical context:

We try to look at the sector’s aggregate growth picture on an ex-Amazon basis given the online retail giant’s growing heft. But that isn’t much of an issue in the Q2 numbers, as Amazon’s earnings were up only +3.6% in the period.

For more details about the Q2 earnings season and evolving expectations for the coming quarters, please check our weekly Earnings Trends report.