What to Expect from Q3 Earnings Season with Big Banks Set to Report?

The Finance sector dominates this week’s line up of earnings reports, with a representative cross section of the space’s representatives on deck to come out with September-quarter results. These include the big money-center operators like JPMorgan JPM to brokers like Goldman Sachs GS, and regional players like PNC Financial PNC.

This week’s line up of reports has enough representation from other major sectors to give us a good flavor of what to expect the rest of this reporting cycle. Outside of the Finance sector, we will get to see results from Netflix NFLX, Schlumberger SLB, Johnson & Johnson JNJ, IBM (IBM - Free Report) and the major railroad operators. In total, we have more than 100 companies reporting quarterly results this week, including 52 S&P 500 members.

Regular readers know that we count results from the 23 S&P 500 members that have already reported their fiscal quarters ending in August as part of the Q3 tally. This means that we will have seen Q3 results from about 15% of the index’s total membership by the end of this week. And as you can see in the chart below of weekly reporting calendar, the Q3 earnings season is fairly front-end loaded, particularly for the S&P 500 index.

Total earnings for the aforementioned 23 S&P 500 members that have already reported their fiscal quarters ending in August and get counted as part of the Q3 tally are down -12.7% from the same period last year on +3.5% higher revenues, with 87% beating EPS estimates and 60.9% beating revenue estimates.

The chart below compares the results from these 23 index members with what we had seen from the same group in other recent periods.

It is hard to draw any useful conclusions from the results thus far, with the pronounced earnings decline primarily a function of tough comparisons at Micron MU whose Q3 earnings were down -86.7% on -42.3% lower revenues. That said, the proportion of companies beating revenue estimates are relatively on the lower side.

For Q3 as a whole, total earnings for the index are expected to decline -5% from the same period last year on +4.2% higher revenues, with 11 of the 16 Zacks sectors expected to have lower earnings compared to the year-earlier period, including the Tech sector.

Tough comparisons to last year when growth was boosted by the tax cut legislation were all along expected to weigh on earnings growth in 2019. Moderating U.S. economic growth and notable slowdowns in other major global economic regions are having a further negative impact. Uncertainty about the global trade regime and a growing resort to tariffs are not helping matters either. 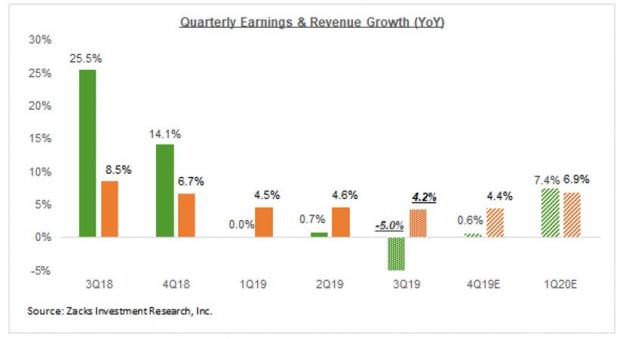 The table below shows the summary picture for 2019 Q3, contrasted with what was actually achieved in the preceding period. 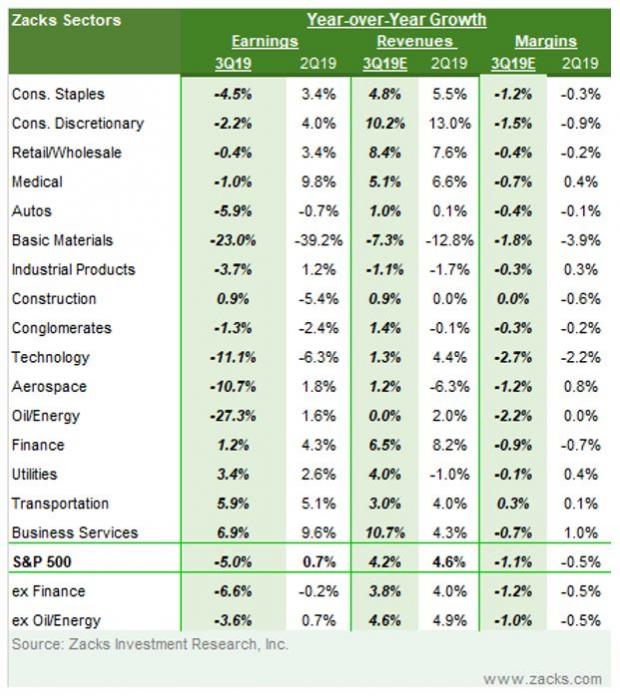 Total Q3 earnings for the Zacks Major Banks industry that includes JPMorgan, Wells Fargo WFC and other major industry players are expected to be down -9.4% from the same period last year on +0.3% higher revenues.

The table below shows the Finance sector’s Q3 earnings and revenue growth expectations at the medium-industry level relative to the space’s actual results in the preceding period and expectations for next quarter.

Bigger year-over-year declines at Wells Fargo and Bank of America BAC are driving most of the industry’s growth weakness in Q3, but the other players are expected to have at best flat earnings relative to the year-earlier period. 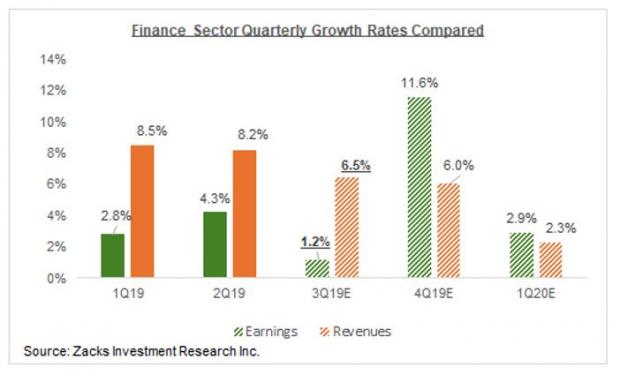 It is the weak Tech growth that is a major drag on the aggregate Q3 earnings growth rate for the S&P 500 index deeper into negative territory. The Tech sector is the biggest earnings contributor in the S&P 500 index, bringing in 22.9% of the index’s total earnings in the forward 4-quarter period. Excluding the Tech sector’s drag, total earnings growth for the remainder of the index would be down only -3.1% (-5% with Tech included).

Driving the Tech sector’s weak earnings growth expectation for the quarter is Apple AAPL and the broader semiconductor space. For Apple, September quarter earnings are expected to be down -9.4% on -0.9% lower revenues. 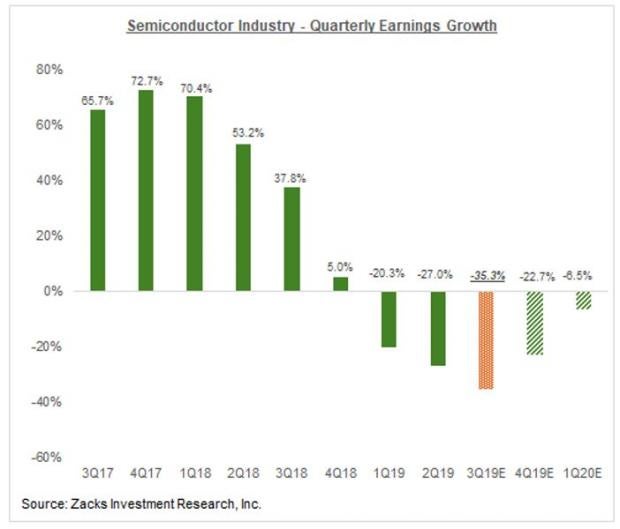 The expectation is that the year-over-year declines bottom in Q3 and start improving from next quarter onwards, which is expected to help improve the sector’s growth picture, as the chart below shows. 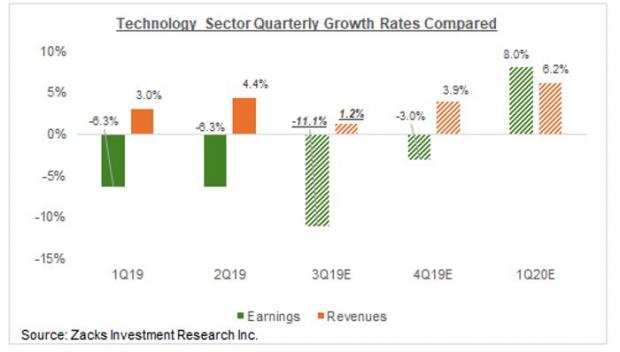 For an in-depth look at the overall earnings picture and expectations for Q3, please check out our weekly Earnings Trends report >>> Start of Q3 Earnings Season