Stockbrokers used to have it made in the shade. Prior to 1975, all brokers charged exactly the same commissions to their customers to trade stocks. Their firms had memberships to the exchanges and they were they exclusive gatekeepers. Individual investors were a captive audience; If you wanted to invest, your only choice was to pay a commission to a stockbroker.

Fixed commissions meant big profits for brokers and their firms, but they also meant that the cost of executing trades could significantly eat into investors’ profits, especially on small trades.

On May 1st 1975 – long known as “May Day” in the industry – the Securities and Exchange Commission mandated that brokers stop charging fixed fees and compete for business on the basis of price, paving the way for the modern discount broker.

While many “full-service” brokers continued to charge large commissions (National Association of Securities Dealers regulations formerly allowed for commissions of up to 5% of the value of the trade), ex-stockbroker Charles Schwab was building a company that catered to investors who didn’t want advice, but simply trade execution and account services – and lower commissions.

The popularity of the internet in the mid-1990s massively increased investor access to the financial markets. For the first time, investors could access trading venues almost directly from the comfort of their own homes and without ever talking to another person. Eventually, that access would extend to smartphones and other devices, allowing trading from literally anywhere in the world.

Dozens of competing online discount brokers ensured healthy price competition and commissions fell below $10/trade. Since most of the matching of buyers and sellers happened electronically rather than on a physical trading floor, their variable cost per trade was almost zero. Once brokerage firms had the necessary connectivity in place, orders could be entered and filled with little or no human assistance.

Although these firms all developed different platforms that appealed to customers in different ways, if all a customer wanted to do was buy or sell shares of a stock, there were numerous choices available  that all functioned the same basic way. The industry had become largely commoditized.
Interactive Brokers (IBKR) took commissions from low, to very low, to non-existent when they eliminated trading commissions on stock and ETF trades altogether in September for customers who use its bare-bones IBKR Lite platform.

The rest of the big discount brokers were forced to follow suit or else risk losing their customers to no-cost trading.

(Side note: Interactive Brokers started as an options market making firm called “Timber Hill” that executed much the same strategy in options markets, tightening bid-ask spreads until trading was unprofitable for thousands of small market-makers who were forced out of business. It’s a theme…)

TD Ameritrade (AMTD - Free Report) is one of the firms that has been forced to match the move into zero commissions. They’ve spent heavily in the past two decades to build an extensive collection of trading services meant to appeal to a wide range of investor – from neophytes all the way to professional individual traders.

While the brokers are counting on interest rate spreads (which remain quite wide), commissions on other types of trades like futures and options and various other fees for revenues, TD Ameritrade is likely to lose more revenue than many competitors.

While Charles Schwab (SCHW) will give up about 5% of revenues as a result of the new commission structure, TD Ameritrade stands to lose up to 16%.

The new commission structure won’t be apparent in results for the current quarter, but estimates for next quarter have fallen 9% since the commission war began. AMTD is a Zacks Rank #5 (Strong Sell).

Commoditization of core goods and services and subsequent price wars are among the most destructive forces for the earnings of any business. The online discount brokerage industry is suffering mightily right now and TD Ameritrade looks to be getting just about the worst of it. Investors would be wise to avoid the online brokers altogether until the smoke settles. 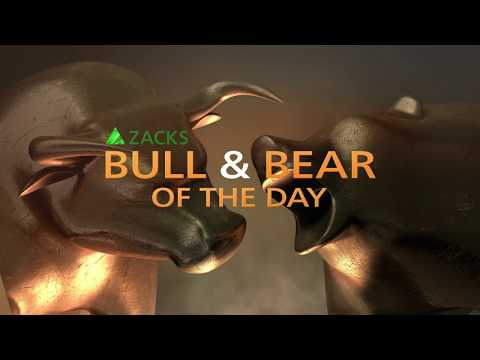 Bear of the Day: The Children's Place (PLCE)