We here at Zacks are always talking about the Zacks Rank, which harnesses the power of earnings estimate revisions. But that doesn’t mean we don’t care about the top line!

The Sales & Earnings Growth Winners screen looks for companies with strong sales and a Zacks Rank of #1 (Strong Buy) or #2 (Buy), as well as a Zacks Style Score of A or B for growth. But that’s not all, because this screen also seeks out effective management via ROE and good liquidity via the current ratio.

That’s a lot of parameters. But the stocks that pass the test are strong and stable growth picks. We’ve highlighted three below:

So how much have shares of online vehicle auctions leader Copart (CPRT - Free Report) gained so far this year?

Nope. In the end, shares of this company are up 75% year to date!

That performance is all the more impressive when you consider that the Auction & Valuation Services space is in the Top 7% of the Zacks Industry Rank with an advance of nearly 60%. So it takes A LOT to outperform this area in 2019.

CPRT has accomplished this with positive surprises in 13 of the past 15 quarters. Meanwhile, the company is also strengthening its footprint in key international markets, such as the U.K. and Germany.

In the fiscal fourth quarter report (its fiscal year ends in July), the company announced earnings per share of 60 cents. The result beat the Zacks Consensus Estimate by more than 5% and improved nearly 43% from last year.

Since that was its fourth quarter, we can also tell you how it performed for the entire year. Fiscal 2019 earnings of $2.25 beat our consensus by 4 cents and improved from last year’s $1.73.

Meanwhile, revenue of $2 billion was inline with expectations and up from $1.8 billion in the previous year.

CPRT will report again on November 19. 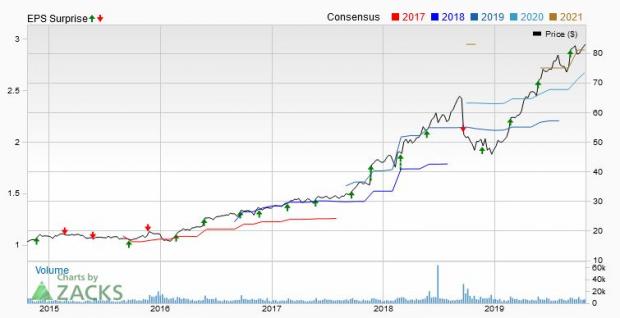 It’s the 21st century! We can’t be expected to go to yoga class in some raggy old shorts. What are we…barbarians?

That’s where Lululemon (LULU - Free Report) first gained attention. They understood that people would shell out tons of money for clothes that they’re going to sweat in.

But the athleisure world has become much more than yoga. If you take a look at LULU’s website today, you’ll also see undergarments, sweaters and winter jackets.

And it doesn’t look to be slowing down.

In its fiscal second quarter release, LULU reported earnings per share of 96 cents, which was more than 35% better than the previous year. That marked a positive surprise of 7.9%.

LULU attributed the solid results to its “Power of Three” growth pillars, which are production innovation, omni-guest experience and market expansion.

As a result, the Zacks Consensus Estimate for the fiscal year ending in January 2020 is up 2.2% over the past two months. Likewise, analysts have boosted expectations for next fiscal year (ending January 2021) by 1% in that time.

LULU will report again on December 5. 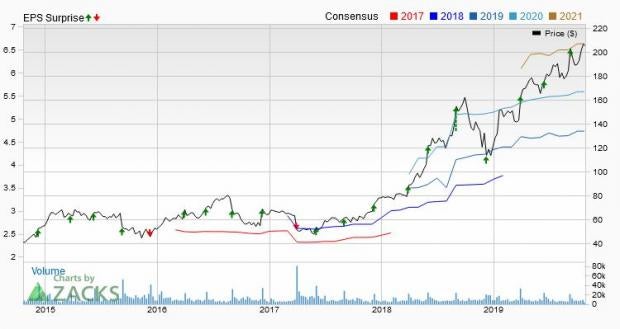 Ever since spinning off from Agilent Technologies back in 2014, KeySight Technologies (KEYS - Free Report) has been making it look easy.

This electronic design & test instrumentation systems company has beaten earnings estimates in 5 straight quarters and, more impressively, in 14 of the past 15 quarters. And the one quarter that didn’t positively surprise was a meet, so there are no misses in all that time.

The Electronics – Measuring Instruments industry is in the Top 4% of the of the Zacks Industry Rank with a year-to-date return of approximately 48%. But KEYS has easily outperformed its space by gaining more than 66% in 2019.

The company is launching new solutions in some of the hottest and growthiest areas, such as 5G and IoT. It also has collaborations with Qualcomm, Xilinx and AT&T, which further aids in its robust 5G portfolio.

In its fiscal third quarter report, KEYS announced earnings per share of $1.25, which trounced last year’s 89 cents and beat the Zacks Consensus Estimate by more than 22%.

Over the past four quarters, it is amassed an average positive surprise of nearly 19%.

Revenue of $1.08 billion also topped our expectations while also improving 8% from last year. This performance was driving by growth across most of its end markets as it “continued to capture a significant portion of the demand we see in the marketplace”.

Earnings estimates for this fiscal year (ending this month) are up 8.5% in three months to $4.59 per share.

Analysts have boosted next fiscal year’s outlook by 7.5% in that time to $4.90. That number also suggests year-over-year improvement of nearly 7%. 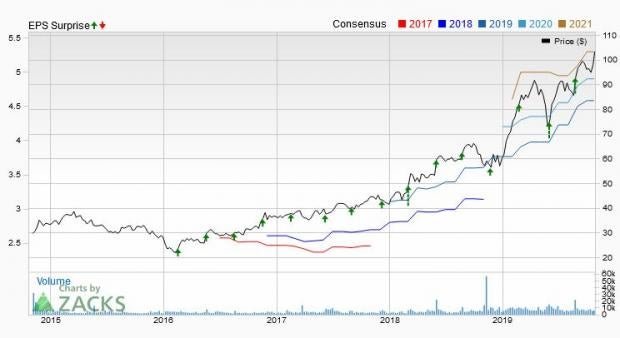 Tesla (TSLA) Rally Is More Than A Short Sqeeze