Caterpillar (CAT - Free Report) stock has been pretty volatile over the last year amid the U.S.-China trade war and growing economic uncertainty. Last week, the global construction and mining equipment giant fell short of both top and bottom-line estimates and lowered its forecast.

Caterpillar’s Q3 fiscal 2019 revenue slipped 6% from the year-ago period and easily missed our quarterly projection, while adjusted earnings dipped 8% and also fell short estimates. The last time the firm’s sales fell against the prior-year quarter was the fourth quarter of 2016.

Worse still, CAT lowered its full-year profit outlook to between $10.90 and $11.40 per share, from its previous range that was at the low end of $12.06 to $13.06. The company’s updated forecast comes as its dealers pull back on purchases amid increasing uncertainty.

The Deerfield, Illinois-based company, which sells its industrial-level equipment in nearly 200 countries, is widely regarded as a global economic bellwether, alongside Boeing (BA - Free Report) and others. And despite the fact that the S&P 500 hit new highs on Monday and the U.S. Federal Reserve is expected cut its benchmark interest rate on Wednesday afternoon, Caterpillar appears to be in a rough position at the moment.

CAT continues to try to navigate rising tariff-relate costs. On the positive side, President Trump seems more optimistic that the U.S. and China will be able to reach a more substantial trade deal. Nonetheless, the global economy appears to be slowing down and manufacturing PMIs continue to slip.

Meanwhile, the International Monetary Fund recently said it expects the global economy to grow at its slowest pace since 2009. “In the fourth quarter, we now expect end-user demand to be flat and dealers to make further inventory reductions due to global economic uncertainty,” CEO Jim Umpleby said in prepared remarks.

“Caterpillar’s improved lead times, along with these dealer inventory reductions, will enable us to respond quickly to positive or negative developments in the global economy in 2020.” 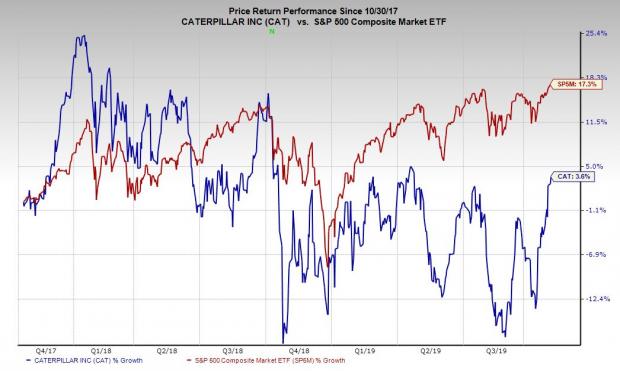 Despite Caterpillar’s disappointing Q3 and the larger macroeconomic factors at play, CAT stock is up 12% in the last month to crush the S&P 500’s 2.2% movement. In fact, the company’s shares have jumped nearly 6% since it posted its quarterly results on October 23.

CAT stock is also up well above both its 50 and 200-day moving averages, for those who pay attention to technicals, thanks to its recent climb. But we can see how up and down Caterpillar stock has been, which means a pullback could possibly be on the horizon.

Moving on, our current Zacks Consensus Estimates call for the company’s fourth quarter sales to slip 4.6% to hit $13.69 billion. This projected downturn, coupled with its recent Q3 performance is expected to push its full-year fiscal 2019 sales down by 0.82%.

Peeking further ahead, Caterpillar’s Q1 fiscal 2020 sales are expected to fall 6.4%, with fiscal 2020’s revenues expected to come in 3.5% below our current-year projection.

Caterpillar has also missed our quarterly earnings estimates in three out of the last four quarters and has seen its consensus earnings estimates sink heavily. CAT is a Zacks Rank #5 (Strong Sell) stock right now that holds “D” grades for Value, Growth, and Momentum in our Styles Scores system.

CAT does pay a dividend and boasts a solid yield of 2.94% at the moment. And clearly the firm is likely poised to return to growth, but the global economic picture is out of its hands.

Investors still interested in the broader Manufacturing - Construction and Mining space, which rests in the bottom 32% of our 255 Zacks industries, might instead consider #2 (Buy)-ranked The Manitowoc Company, Inc. (MTW - Free Report) .