Sure, peanut butter is great all by itself… but it's so much better when you add some jelly! The same is true for Law & Order, Hall & Oates, and Batman & Robin.

And let’s not forget about the combination of the Zacks Rank and the Zacks Style Scores!

The Zacks Rank is the best way to harness the power of earnings estimate revisions, and it could definitely be your sole tool in picking stocks. However, you could also use it as the foundation of a more detailed decision-making process by adding Style Scores.

That's why we have a screen called Zacks Building Blocks.

By using the Zacks Rank and the Style Scores together, along with several other stock assessment metrics, you can get a more manageable list of names with a great chance of significantly outperforming the market.

Below are three names that recently passed the test. Click here to see the full list and the parameters.

If it’s OK to look like a lumberjack without ever picking up an axe, then there’s no problem in looking like a cowboy without ever riding a horse.

Boot Barn Holdings (BOOT - Free Report) is a western-themed apparel and footwear company that certainly caters to people with a direct relationship to that lifestyle, but you don’t open more than 200 stores in 33 states and soar 130% YTD by selling just to rodeo and country music fans.

Instead, the company is at the forefront of a growing specialty retail field with annual sales nearing $1 billion… and it plans to wrangle a good amount of that market.

In its fiscal second quarter, BOOT reported earnings per share of 24 cents, which doubled last year’s result and beat the Zacks Consensus Estimate by 20%.

It also expects same-store sales of about 6.5% instead of the previous 6%. Plus, the plan is to open or acquire 25 stores in the fiscal year.

Needless to say, analysts appreciated what they heard. The Zacks Consensus Estimate for this fiscal year (ending March 2020) advanced 6% in the past 7 days to $1.77 per share.

In other words, analysts expect earnings growth of more than 19% for next fiscal year over this one. 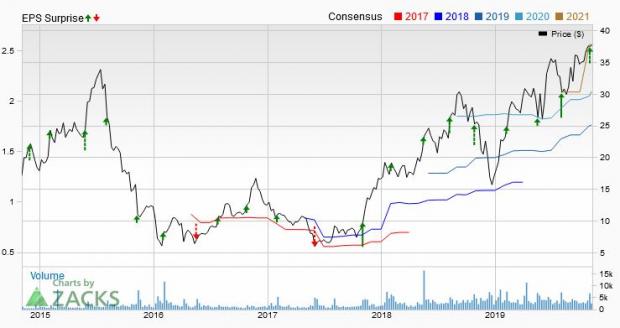 If you think WellCare Health Plans Inc. (WCG) was good on its own, then just wait until it merges with Centene to form one of the premier managed care enterprises with a focus on government sponsored programs.

It’s expected to close in the first half of next year and will make the new company a leader in Medicaid, Medicare and the Health Insurance Marketplace.

WCG has jumped nearly 23% this year, which easily outperforms its highly-ranked industry of Medical - HMOs.

In its third-quarter report last week, total revenues reached $7 billion. That was nearly 5% better than the Zacks Consensus Estimate and improved more than 41% from last year.

WCG just reported its 19th straight quarter with a positive surprise, as earnings per share of $5.50 beat the Zacks Consensus Estimate by 40%! It also improved 65.2% from last year.

Over the past four quarters, the company has an average surprise of 17.3%.

WCG doesn’t offer a guidance due to its pending merger with Centene, but that hasn’t stopped the analysts from making moves. 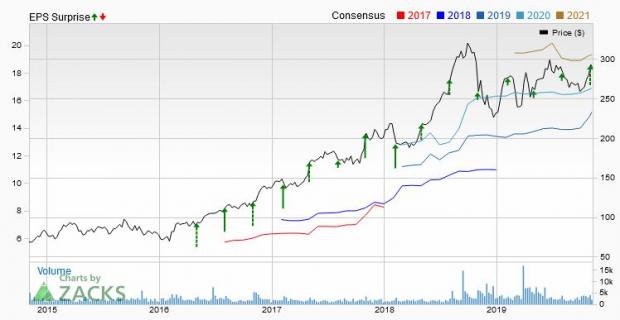 Let’s cut right to the chase, OK? Take a look at the graph for CDW Corp. (CDW - Free Report) below.

Now THAT’s a chart! The stock has beaten the Zacks Consensus Estimate for 9 straight quarters and hasn’t missed in years. Plus, its price moved mostly higher that entire time.

In fact, CDW is up more than 64% year-to-date, which trounces its highly-ranked industry’s gain of around 18% in that time. By the way, the Computers – IT Services industry is in the Top 22% of the Zacks Industry Rank.

CDW is a leading provider of integrated IT solutions to business, government, education and healthcare customers. In other words, it’s part of a space that’s expected to reach $1.088 trillion in 2020 (according to Gartner) from $993 billion in 2018.

Given its robust product portfolio and frequent product refreshes, we believe that CDW is in a good position to benefit from this growth opportunity… and its recent third-quarter report provides ample evidence.

Earnings per share of $1.70 were nearly 20% better than the previous year. It also beat the Zacks Consensus Estimate by 7.6%, which brought its four-quarter average surprise to 9.1%.

Revenue of $4.91 billion improved 12.2% from last year and beat the Zacks Consensus Estimate of $4.64 billion.

CDW enjoyed growth across all its end markets, especially in small business, government and healthcare.

This growth in end markets, along with its broad-based portfolio and hot IT spending environment, are tailwinds for CDW moving forward.

The strong quarter led to a sharp increase in earnings estimates over the past 7 days. The Zacks Consensus Estimate for this year is up 2% to $5.98 in that short period of time.

Analysts have boosted next year’s estimate by 2.5% to $6.52, which also suggests year-over-year improvement of 9%. 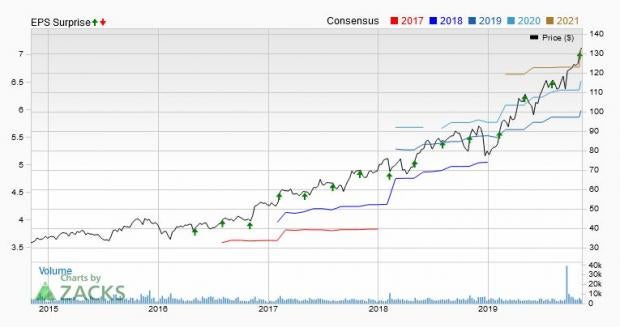