Gap (GPS - Free Report) and its subsidiaries are another victim of the retail apocalypse. This firm is doing so poorly that it is spinning off its only growing brand Old Navy so that it doesn’t sink with the rest of the ship. Gap is down roughly 37% so far this, underperforming the already dismal retail apparel sector. Analysts' pessimism continues towards this falling stock, pushing it into a Zacks Rank #5 (Strong Sell). 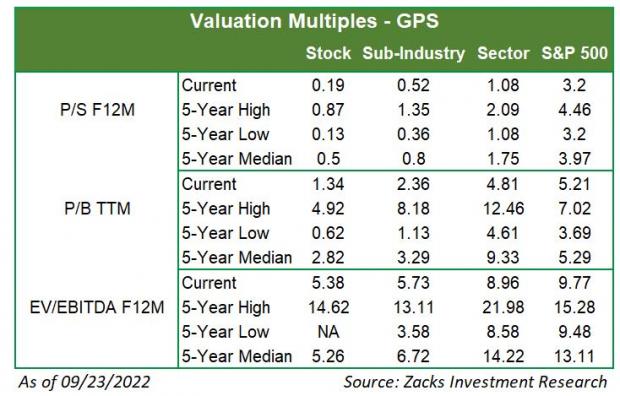 Gap Inc. includes Banana Republic, Gap, Athleta, and Old Navy, which is in the process of being spun off as its own company. This firm has had a very disappointing last year, with the past 4 quarters illustrating a topline decline. This most recent quarter demonstrated the worst Q3 profitability since 2012, as this firm falls into the depths of the retail apocalypse.

Even just looking at this company’s investor relations page, you can tell that there are more significant issues with the company. Everything is disorganized and aesthetically displeasing. It isn’t intuitive, and finding the most recent earnings press release took a hunt. This illustrates this firm’s archaic practices that have led them to where they are today.

Every segment this last quarter declined year-over-year, margins are thinning, and everything is pointing to a dying company. Guidance was further lowered, and comparable sales are expected to be down in the mid-single digits. This negative narrative is only going to decline further once the growing Old Navy is completely divested.

Management’s sentiment was very negative, and the interim CEO Robert Fisher said: “We are not pleased with the third quarter results,” something you rarely see from a company head in an earning press release. This is a sign of major systemic issues within the company that I don’t believe will be easily managed.

Robert Fisher just became Gaps interim CEO one month ago after Art Peck stepped down from his position following a very disappointing last 4.5 years in the job. The company has lost 59% of its value in the previous 5 years, and unless the business makes significant systemic changes to its operations, I fear that the firm will not stay afloat much longer.

Gap and Banana are higher end brands but have been forced to substantially discount their prices in order to get customers in the door. This has set a precedent in the market for these brands, and consumers will now only purchase them when they are severely discounted. This is cutting the firm’s ability to profit.

This stock has been a falling knife for some time now, and the continued negative earnings justify its downward trajectory. I would stay away from these shares as they have fallen victim to the retail apocalypse.

Bear of the Day: Baozun (BZUN)