The Zacks Mining - Gold industry primarily comprises big and small companies that are engaged in gold extraction from mines of widely varying types and scale. Notably, gold mining is a long and complex process. Significant exploration and development to evaluate the size of the deposit followed by assessment of ways to extract and process the ore efficiently, safely and responsibly precedes actual mining. On average, it takes between 10-20 years for a gold mine to produce material that can be refined.

Let us take a look at the three major themes in the industry:

The group’s Zacks Industry Rank, which is basically the average of the Zacks Rank of all the member stocks, indicates bright prospects in the near term. The Zacks Mining- Gold Industry, which is a 32-stock group within the broader Zacks Basic Materials Sector, currently carries a Zacks Industry Rank #43, which places it at the top 17% of 256 Zacks industries. Our research shows that the top 50% of the Zacks-ranked industries outperforms the bottom 50% by a factor of more than 2 to 1.

Looking at the aggregate earnings estimate revisions, it appears that analysts are gradually gaining confidence in this group’s earnings growth potential. In the past year, the industry’s earnings estimates for the current year have been revised upward by 43%.

The Mining- Gold Industry has outperformed both the S&P 500 Index and the Basic Material sector in a year’s time. While the stocks in the industry have collectively advanced 47.2%, the S&P 500 has rallied 17.7%. Meanwhile, the sector has dipped 1.1%.

On the basis of forward 12-month EV/EBITDA ratio, which is a commonly used multiple for valuing gold-mining companies, we see that the industry is currently trading at 6.8X compared with the S&P 500’s 12.2X and the Basic Material sector’s forward12-month EV/EBITDA of 5.8X. This is shown in the charts below.

The prospects of a dwindling supply looms large on the gold-mining industry. Meanwhile, demand will remain strong driven by India and China. The technology sector is also driving demand for the yellow metal. Lower mined gold supply, higher demand and geopolitical tensions are likely to drive prices north, which bode well for gold-miners.

Kirkland Lake Gold Ltd. KL: This Toronto, Canada-based company sports a Zacks Rank #1. The Zacks Consensus Estimate for earnings for fiscal 2019 has improved 13% over the past 90 days. The Zacks Consensus Estimate for fiscal 2019 projects year-over-year growth of 97.1%. The company beat estimates in the trailing four quarters by 11.12%, on average. Shares of this company have surged 82% in the past year. 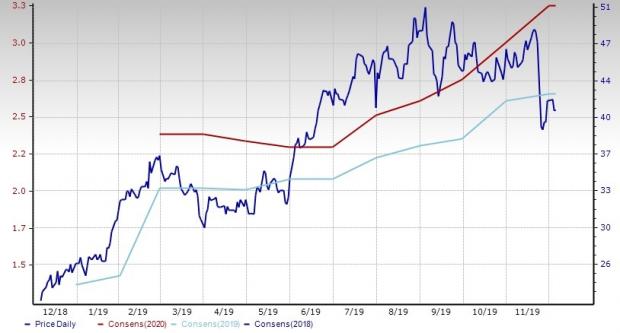 Yamana Gold Inc. AUY: This Toronto-based company flaunts a Zacks Rank #1. The Zacks Consensus Estimate for earnings for fiscal 2019 has gone up 71% over the past 90 days. The company beat estimates in the trailing four quarters by 100%, on average. Shares of the company have surged 74% in a year’s time. 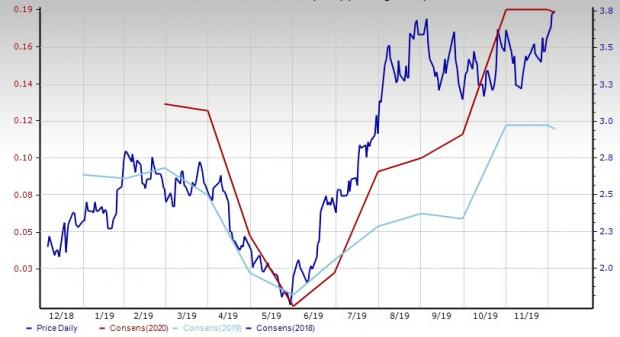 Franco-Nevada Corporation (FNV - Free Report) : This Toronto, Canada-based company is a Zacks Rank #2 stock. The Zacks Consensus Estimate for earnings for fiscal 2019 has improved 8% over the past 90 days. The Zacks Consensus Estimate for fiscal 2019 projects year-over-year growth of 45.3%. The company beat estimates in the trailing four quarters by 11.75%, on average. Shares of the company have appreciated 39% in the past year. 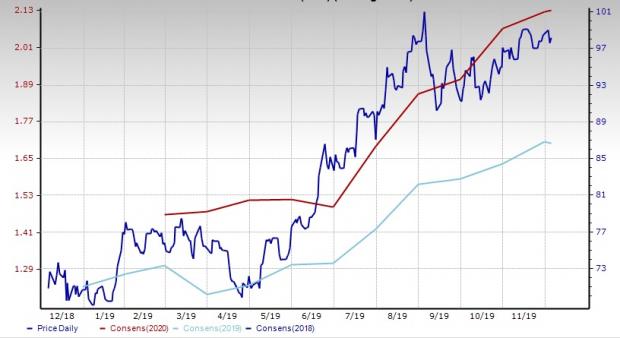 B2Gold Corp. BTG: The Zacks Consensus Estimate for fiscal 2019 earnings of this Vancouver, Canada-based company has improved 15% over the past 90 days. The estimate suggests growth of 43.75% over the prior fiscal. The company beat estimates in the trailing four quarters by 11.31%, on average. The stock carries a Zacks Rank #2. Its shares have gone up 48% over the past year. 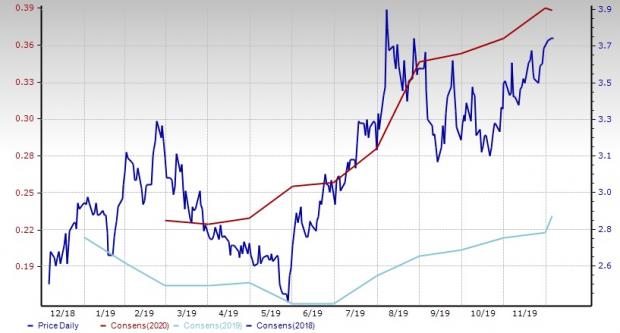