Shares of Red Robin Gourmet Burgers, Inc. (RRGB - Free Report) have plummeted since the firm posted a larger-than-expected Q3 loss early last month. The recent downturn is part of a much larger decline that comes as the burger chain’s sales slide, which even prompted an attempted takeover.

Red Robin is a casual restaurant company best known for its burgers and fries and boasts roughly 560 mostly-suburban locations across the U.S. and Canada. The firm’s quarterly sales have fallen for six straight periods amid a quickly changing retail and restaurant landscape. Plus, chief executive Denny Marie Post retired abruptly in early April.

The recent downturn and leadership change saw private-equity firm Vintage Capital offer to pay $40 a share to buy Red Robin in June. Vintage also called on Red Robin to launch a review of strategic alternatives. The buyout price represented a nearly 60% premium compared to where RRGB stock was trading at the time.

Since then, Red Robin hired Paul J.B. Murphy III to take over as CEO, effective October 3. The company also in early September said it was focused on executing its own “strategic plan to restore growth and improve profitability.” Plus, Red Robin announced that it rejected Vintage’s proposal because it “undervalues” the firm “and is not in the best interests of all shareholders.” 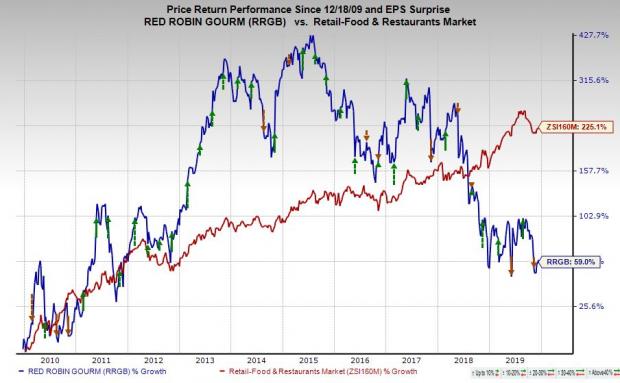 With this in mind, Red Robin has increased its spending to help lower wait times. RRGB has also rolled out its new in-restaurant table management software to lower ticket times, improve tableside service, and handle larger volumes during peak hours. On top of that, Red Robin has tried to expand its online-ordering business and ramp up its carry-out, delivery, and catering sales.

Investors can see in the chart above just how rough things have gotten for Red Robin recently. In fact, the stock has tumbled roughly 50% in the past two years, while its industry has surged 25%. Much of this downturn came in 2018, with RRGB down just 12% in the last 12 months, but it has been a wild ride in 2019, with massive swings.

RRGB is currently trading at roughly $27.50 per share, well off its 52-week highs of over $36. Despite the downturn, Red Robin’s valuation has actually soared to all-time highs. RRGB is currently trading at 36.6X forward 12-month earnings estimates, which marks a premium compared to its industry’s 24.2X average and its own three-year median of 19.9X.

Our current Zacks Consensus Estimates call for Red Robin’s fourth-quarter revenues to slip 0.77%, with its full-year fiscal 2019 sales expected to fall 1.7% to $1.32 billion. Peeking further ahead, the company’s 2020 sales are projected to sink an additional 2.1%, which would represent three straight years of declining revenues.

RRGB also holds “D” grades for both Growth and Momentum in our Style Scores system. And Red Robin doesn’t pay a dividend to help offset its slide. Therefore, investors still interested in the restaurant industry might instead want to check out Zacks #2 (Buy)-ranked Chipotle Mexican Grill CMG or Wingstop Inc. WING.

Bear Of The Day: Lazard (LAZ)