Tilly's TLYS is a retail stock that has soared since it topped our quarterly estimates at the start of December. Plus, TLYS shares are trading under $15, which might make it an attractive prospect for some investors.

Tilly’s is a trendy clothing, footwear, and apparel retailer geared toward teenagers and young adults. The firm is inspired by “West Coast fashion” and competes against the likes of Urban Outfitters URBN, Zumiez (ZUMZ - Free Report) , and American Eagle AEO. Tilly’s sells products from Vans VFC, Adidas ADDYY, and many other brands and closed the third quarter with roughly 230 total stores across 33 states.

As we mentioned at the outset, the Irvine, California-headquartered firm topped our Q3 estimates on both the top and bottom line. Management highlighted the fact that it posted its 14th straight quarter of flat to positive comp sales.

With this in mind, TLYS saw its third-quarter fiscal 2019 comps, including e-commerce sales, pop 3.1%, which marked continued strength from the year-ago period’s 4.3% growth in the vital retail metric. Meanwhile, overall sales jumped 5.4% to reach $154.8 million.

Overall, the retail industry looks to be in a solid position as the likes of Target TGT and others continue to prove they can thrive in the Amazon AMZN age. Plus, the U.S. and China have reportedly reached a phase one trade deal that will see the U.S. not roll out new tariffs on consumer-facing goods, which would have included apparel.

Perhaps more importantly, U.S. unemployment rests at 50-year lows and the holiday shopping period is projected to be strong. “Based on our results during Thanksgiving weekend through Cyber Monday, we believe we are well positioned to continue our momentum during the Holiday season,” Tilly’s CEO Ed Thomas said in prepared Q3 remarks. 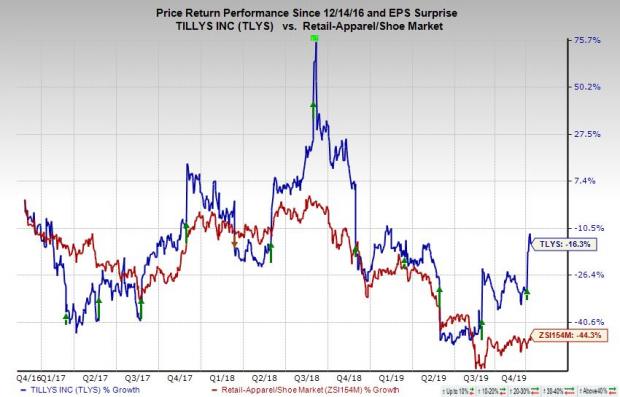 Investors can see in the chart above that Tilly’s revenues have climbed steadily since the firm went public in 2012. The company’s earnings have not been as steady and fell during its first few years as a public company. But this has changed over the last several years.

However, TLYS stock has also been on a wild ride, having climbed from under $6 per share in July of 2016 to as high as $23 a share in September 2018. With this in mind, Tilly’s stock has surged 55% in the last six months, which includes back-to-back bottom-line beats. And its post-Q3 release surge helped it quickly jump above its 50 and 200-day moving averages.

TLYS stock is currently trading at 13.3X forward 12-month Zacks earnings estimates. This marks a slight premium compared to the Retail-Apparel/Shoe Market’s—which has tumbled—11.5X average, as it has for much of the past three years. Despite its impressive climb over the last six months, TLYS is trading far below its three-year high of 33.4X and at a discount against its 17.5X median.

In fact, Tilly’s holds an “A” grade for Value in our Style Scores system at the moment to help it earn an overall “A” VGM score. And the Retail - Apparel and Shoes industry that it calls home also rests in the top 12% of our more than 250 Zacks industries.

Both of these figures would easily top the last three years of annual sales growth, of which 2018 clocked in at the highest, up 3.7% from 2017.

At the bottom end of the income statement, TLYS adjusted fourth quarter earnings are projected to pop 11.1% to hit $0.30 per share, with full-year fiscal 2019 expected to climb 10%. The firm’s Q1 FY 2020 EPS figure is then expected to pop from $0.02 in the prior-year quarter to $0.05 per share, with its full-year earnings projected to jump another 4.8%.

Tilly’s has also received positive earnings estimate revisions recently, with the largest percentage changes coming for its current period and Q1 2020. This helps TLYS earn a Zacks Rank #1 (Strong Buy) at the moment.

TLYS is currently trading at around $12 per share and has been somewhat volatile. But Tilly’s certainly appears to present some intriguing fundamentals and might be worth taking a deeper look at.