Bull of the Day: Spotify (SPOT)

Shares of Spotify (SPOT - Free Report) have surged 35% in the last three months and it crushed Q3 Wall Street estimates, posting surprise positive earnings. Spotify has also continued to expand its paid subscriber base in a crowded streaming music market and focused on new ways to grow.

Spotify helped jump start the paid streaming music space back in 2008 that has helped reinvigorate a music industry that long feared illegal downloads would take over. In fact, streaming represents roughly 80% of recorded music sales, according to industry reports, and Spotify is the world’s largest streaming music company.

Spotify beat Q3 2019 top and bottom line estimates at the end of October and reported adjusted earnings of +$0.41 per share, which destroyed our Zacks estimate that called for a loss of -$0.40 per share.

The streaming music powerhouse also posted its 8th consecutive quarter of positive free cash flow. And SPOT saw its total monthly active users jump 30% to 248 million, which outpaced the high end of its own guidance.

More importantly, the company’s vital Premium Subscribers—who pay monthly fees for ad-free music—surged 31% to 113 million. The growth was driven by the continued success of its $14.99 a month Family Plan and the $4.99/month Student Plans. This user expansion has helped curb some of Wall Street’s worries that Spotify’s much larger tech titan peers, including Apple (AAPL - Free Report) and Amazon (AMZN - Free Report) would make things far harder on the much smaller firm.

Apple Music has grown in popularity, but luckily for Spotify the iPhone giant hasn’t tired to undercut its pricing models with both their individual premium plans coming in at $9.99 per month. Meanwhile, Amazon’s premium streaming music service hasn’t gained as much steam as Jeff Bezos might have hoped. Meanwhile, Google (GOOGL - Free Report) and Pandora (owned by Sirius XM Holdings Inc. (SIRI - Free Report) are part of a larger group of third-tier players.

Overall, Spotify has been able to grow in the crowded and lucrative streaming music space compared to its rivals. Last quarter, Spotify said, “relative to Apple, the publicly available data shows that we are adding roughly twice as many subscribers per month as they are. Additionally, we believe that our monthly engagement is roughly 2x as high and our churn is at half the rate.” Spotify boasted similar claims about its superiority to Amazon.

Investors should also note that Spotify has invested heavily in its podcast business over the last year and it is now the second-largest player in the growing market behind only Apple. SPOT plans to increase its podcast unit to help bring in more advertising dollars as the division only accounts for 10% of its ad revenue. It is worth noting that 90% of the company’s total revenue currently comes from its non-ad supported Premium business.

But the Stockholm-headquartered firm’s paid-users still hear ads through podcasts that have ads as part of their own separate business model. “We continue to see exponential growth in podcast hours streamed (up approximately 39% Q/Q) and early indications that podcast engagement is driving a virtuous cycle of increased overall engagement and significantly increased conversion of free to paid users,” Spotify wrote in prepared Q3 remarks.

Clearly, Spotify is still a growth stock, with its valuation still pretty out of whack as it spends to expand. But Wall Street seems okay with its focus on expansion in a crowded and growing space. Meanwhile, SPOT holds a “B” grade for Growth in our Style Scores system and it is part of an industry that rests in the top 30% of our more than 250 Zacks industries. 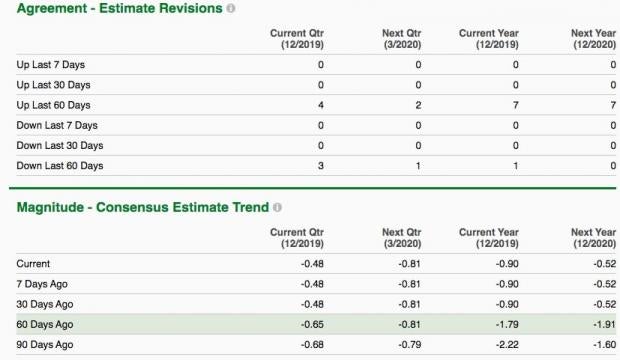 For reference, Spotify’s full-year fiscal 2018 revenue climbed 28.5%, which shows that the firm’s top-line growth is expected to churn along at a solid pace.

At the bottom end of the income statement, the firm’s adjusted quarterly earnings are projected to tumble from +$0.41 per share to -$0.48. Plus, Spotify’s full-year earnings are expected to sink from -$0.60 to -$0.90 a share as it spends on expansion. Then, peeking ahead, SPOT’s fiscal 2020 adjusted EPS figure is projected to improve significantly to a -$0.50 loss.

We can also see just how much more positive Spotify’s adjusted earnings outlook appears. The firm’s full-year fiscal 2019 estimate is up 50% in the last 60 days and 73% over this same stretch for 2020.

Spotify’s strong upward earnings revision trends help the firm earn a Zacks Rank #1 (Strong Buy) at the moment. SPOT does face tough competition, but growth-focused tech investors might want to take a bite out of Spotify because of its ability to thrive in an industry that looks poised to expand for years to come. 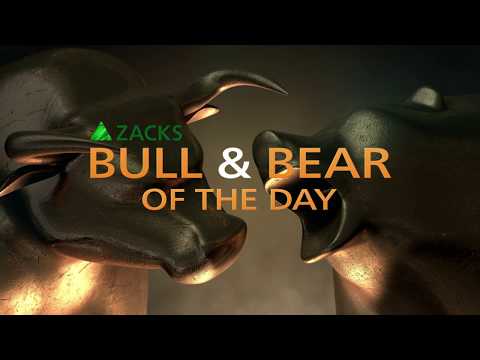 Bull Of The Day: The Rubicon Project (RUBI)