It is still early going in the Q4 earnings season, with results from only 44 S&P 500 members out already. As is typically the case, the Finance sector has a heavy presence in the sample of results at this stage. As such, it may be a little premature to start looking for enduring trends.

Unsurprisingly, the Q4 results aren’t materially different from what was expected and what we had seen in the first three quarters of the 2019. There was no expectation of any meaningful improvement on the growth front; there had been no earnings growth in the first three quarters of the year and Q4 was expected to be no different. This reflected the tough comparisons to 2018 when results were boosted by the tax-cut legislation.

That said, we are starting to see clear signs of momentum on the revenue side in the Q4 results that we have seen already. This could very well be a head fake and a reflection of our desire to look for ‘green shoots’ in the earnings landscape, but it is nevertheless clearly present in the data.

This revenue momentum is showing up in a bigger proportion of companies beating top-line estimates and the revenue growth rate modestly ticking up relative to what we had seen in the first three quarters of 2019, as you can see in the charts below that compare the results from the 44 S&P 500 members that reported through Friday, January 17th to results from the same group of companies in the first three quarters of the year.

We will share the complete Q4 earnings season scorecard a little later, but let me explain here what these two charts are showing. The left-hand chart is comparing the revenue growth rate for the 44 index members with what we had seen from the same group of companies in the first three quarters of the year. The right-hand chart is showing the proportion of these 44 index members beating revenue estimates.

We are not trying to cherry-pick the period by restricting the comparison to 2019 only. Including data from 2018 or even earlier periods may not be truly comparable given the one-off impact of the tax-cut legislation. That said, we do show the expanded comparisons to earlier periods a little later in this write-up.

This could all change as more earnings data comes in this week; we have almost 150 companies on deck to report results this week, including 40 S&P 500 members. This week’s reports will bring in companies beyond the Finance sector, with Netflix (NFLX - Free Report) , Johnson & Johnson (JNJ - Free Report) , Proctor & Gamble (PG - Free Report) , Intel (INTC - Free Report) and a number of airlines and railroad operators on the docket.

For the 44 S&P 500 members that have reported Q4 results already, total earnings or aggregate net income is down -3.8% from the same period last year on +3.9% higher revenues, with 75% beating EPS estimates and 70.5% beating revenue estimates.

The comparison charts below put these results in the context of what we this same group of 44 index members have been reporting in other recent periods. The first set of charts compare the beats percentages while the second set does a similar comparison for Q4 earnings and revenue growth rates.

For the Finance sector, we now have Q4 results from 38.6% of the sector’s total market cap in the S&P 500 index. Total earnings for these Finance companies are up +0.1% from the same period last year on +5.9% higher revenues, with 75% beating EPS estimates and 87.5% beating revenue estimates.

The charts below put the sector’s Q4 results in a historical context.

The aforementioned revenue momentum is very much visible in the Finance results, as you can see if you focus just on the orange bars in the above charts.

Looking at Q4 expectations as a whole, combining the actual results that have come out with estimates for the still-to-come companies, total earnings (or aggregate net income) for the S&P 500 index are expected to be down -3.1% from the same period last year on +3.5% higher revenues, with 10 of the 16 Zacks sectors expected to have lower earnings than the year-earlier period. 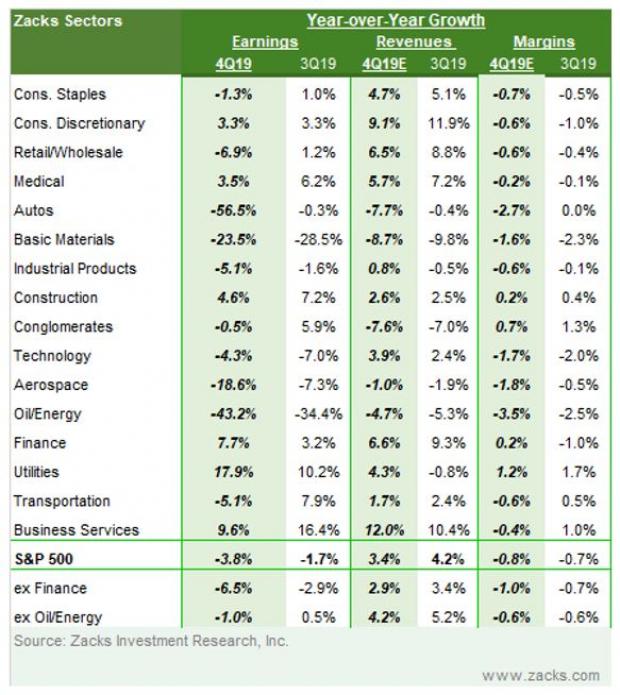 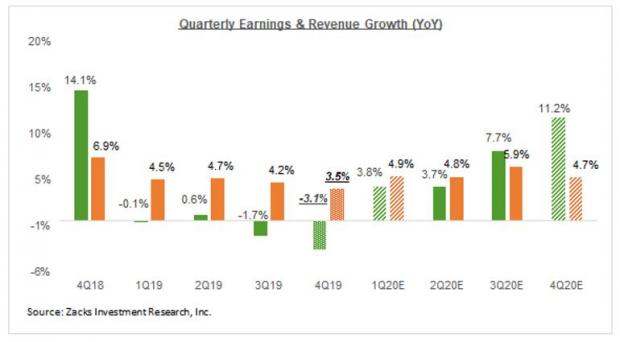 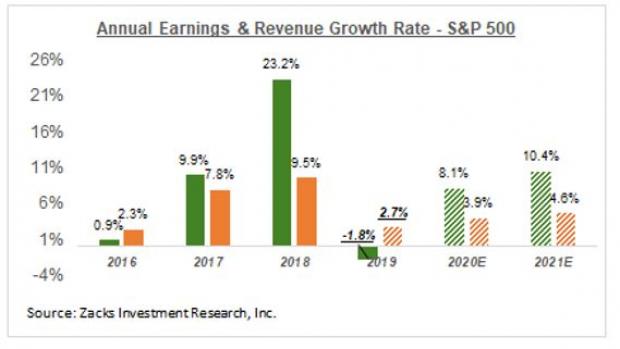 Estimates for full-year 2020 have inched up a little in recent days, which could very well be connected to the aforementioned revenue momentum. The way 2020 Q1 and full-year 2020 expectations evolve in the coming weeks and months will depend to a large extent on management guidance and commentary as 2019 Q4 results come out.

For an in-depth look at the overall earnings picture and expectations for Q4, please check out our weekly Earnings Trends report >>>> Banks Provide Mixed Start to Q4 Earnings Season