We now have Q4 results from 75 S&P 500 members that combined account for 19.4% of the index’s total market capitalization. Total earnings for these 75 index members are down -1.3% from the same period last year on +3.2% higher revenues, with 69.3% beating EPS estimates and 72.0% beating revenue estimates.

The two sets of comparison charts below put the results thus far in a historical context, first the growth rates for these 75 index members.

The results thus far are still dominated by the Finance sector, with the big banks providing a mixed picture at best. JPMorgan JPM came out with stellar numbers, beating estimates and achieving year-over-year growth rates of +20.6% and +8.5% in earnings and revenues, respectively. But Wells Fargo WFC had another sub-par showing and even the Bank of America BAC, Citigroup C and Goldman Sachs (GS - Free Report) reports were at best ok.

For Q4, total earnings for the S&P 500 index are currently expected to be down -3.0% on +3.7% higher revenues, with 9 of the 16 Zacks sectors expected to have lower earnings relative to the year-earlier period. 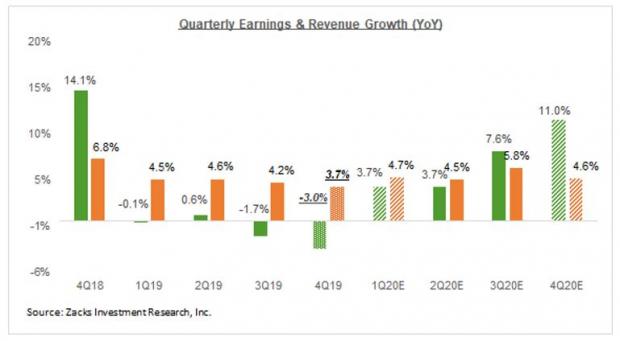 As you can see above, earnings growth was essentially flat in the first two quarters of the year, fell -1.7% in Q3, and is expected to be down -3.0% in Q4. This is expected to change as we turn the page on 2019 given the tough comparisons to tax-boosted earnings in 2018, with growth resuming in 2020 Q1, as the above chart shows. 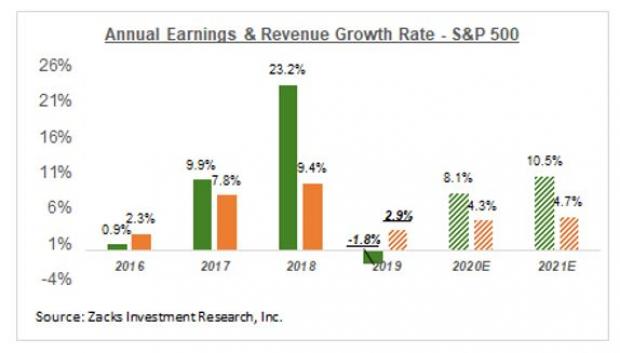