LaCroix maker National Beverage Corp. FIZZ has become a victim of its own success. The company’s sales had soared for years and its stock price came along for the ride, but its flagship flavored seltzer drink became so popular that Coca-Cola (KO - Free Report) , PepsiCo PEP, and many others flooded the quickly expanding seltzer market.

National Beverage makes roughly 70% of its sales from LaCroix. The flavored seltzer brand, with multiple flavors, has been around for decades, but really kicked things into high gear over the last five-plus years as consumers searched for alternatives to sugary sodas.

LaCroix began to fly off shelves and helped create the current seltzer drink craze that has slipped over into the alcoholic beverage market, from Anheuser Busch Inbev NV BUD to Boston Beer SAM.

Plus, retail giants such as Target TGT sell their own store brands and startups are popping up all the time. On top that, the company has been sued in a class-action lawsuit based on claims that its all-natural claims are false. National Beverage has denied the allegations.

In the end, the crowded market makes things harder on National Beverage, and some brands have undercut LaCroix on price. FIZZ still holds the largest market share, based on the most recent industry reports. However, the company’s sales have slipped against hard to compare periods. 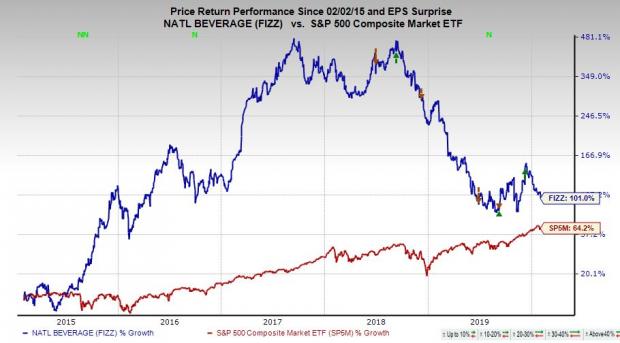 National Beverage’s sales have fallen over the last four quarters, and are down 4.2% in the trailing 12 months. The firm’s earnings have also fallen.

Looking ahead, our Zacks estimates call for the company’s sales to sink 5.1% in its current fiscal year and another 3.1% next year. Worse still, FIZZ is projected to see its adjusted earnings fall over 19% this year and nearly 8% during the next fiscal year.

The nearby chart shows investors just how far FIZZ shares have spilled, down 63% since the fall of 2018. Despite the downturn, National Beverage stock is still trading at 19.7X forward 12-months earnings estimates, which marks a premium compared to the S&P 500’s 18.8X and remains well above its year-long low of 11.7X.

Investors still interested in the broader Beverages market might want to check out #2 (Buy)-ranked Monster Beverage Corporation MNST or Coca-Cola.